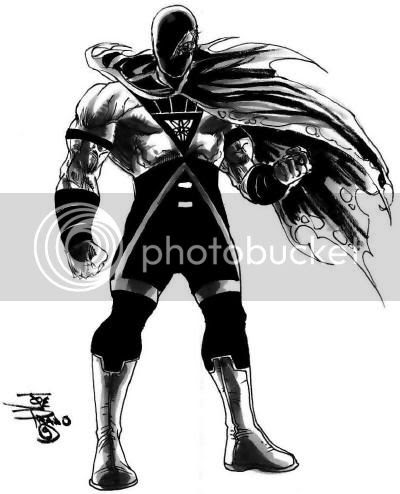 It isn't as if most of the Black Lanterns were terribly effective during their reign of terror in Blackest Night, but what the hell did Al Pratt get to do? Dude's one of the earliest super-heroes, which seemed to only earn him a spot amongst the other dead men of the Golden Age in tormenting the Justice Society of Younger Counterparts or slightly less dead old fogies. The one major Atom "family" fatality went to Eclipso/Jean Loring. Now I realize of every super-family, including Wolverine's, the Atom tree marks possibly the worst application of that informal comic book term. Still, when zombies rise up, they ought to eat their own, right?

The design was a pretty basic melding of the original Atom costume and the standard Black Lantern suit, with a bit of Atom's second costume thrown in for flare. This piece of rotting (but in no way rotten) Golden Age Atom art was spotlighted in an article at Bleeding Cool, and can be purchased here.
Posted by Diabolu Frank at 10:47 AM