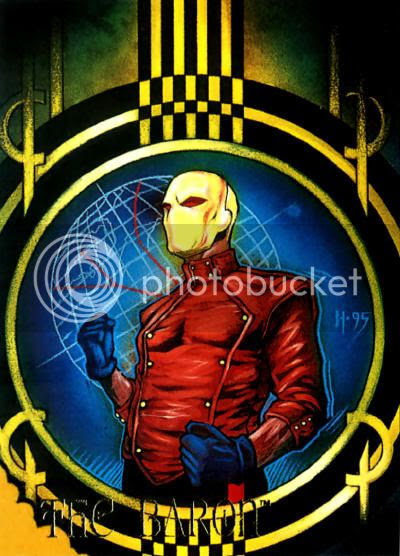 A former Nazi war criminal, the long-lived Baron runs a vast covert network, engaging in illicit activities around the world. The Baron is incredibly powerful, and has displayed a huge tolerance for pain. There are some who even claim that he is no longer human. I know his secret... but I'm not talking.

I have always been into Baron Blitzkrieg. There aren't two finer words that could be combined in the English language for naming a super-villain, so they had to reach out to der Vaterland for that extra element of evil. Here's two more glorious tastes that taste great together: Nazi Superman. It's so deliriously comic-booky it gives me a sugar high just thinking about it. Blitzkrieg's also had some awesome costume designs with atypical but acceptable color schemes, like the yellow suit with a red iron eagle and cross as the chest symbol, with arm length orange gloves/thigh highs incorporating swastikas. Baron Blitzkrieg was so bad, he made Red Skull look like a moderate. They even threw in some magenta every now and again, because all those high ranking Nazis were kinky like that.

Baron Blitzkrieg started out as a Wonder Woman villain, but thanks to Roy Thomas, got around to punching most every World War II era super-hero at some point. As the '90s were wont to do, Baron Blitzkrieg was deemed to gaudy and dated, and got an update. Surprisingly, "The Baron" just got cooler, establishing that Blitzkrieg was still getting his von Strucker on with a secret criminal organization. The Baron switched to a brown uniform shirt, gray pants, and flared knee-high leathers, so you know he was still up for a ride. The Baron was twisted up in Damage's origins, and brought him a mentor figure in the form of Iron Munro.

Despite claiming a love of Damage, Geoff Johns killed of Baron Blitzkrieg in Infinite Crisis, and Damage himself in Blackest Night. The world is a poorer place for the loss... unless you're Jewish, gypsy, gay, mentally or physically handicapped, a member of the All-Star Squadron and are otherwise non-Teutonic.