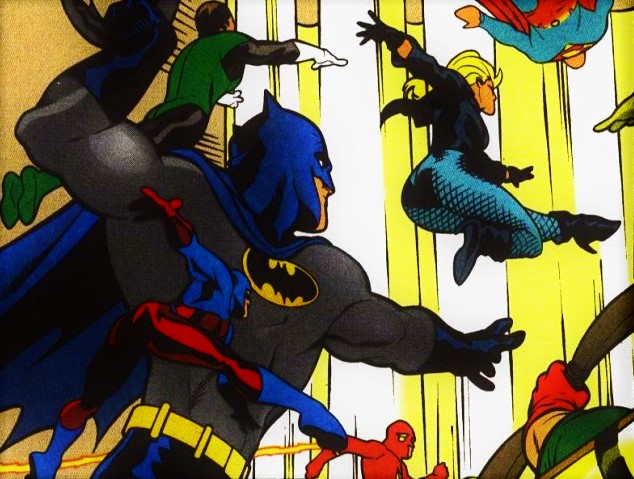 In Central City, early in their careers O.G. science bros Barry Allen and Ray Palmer double date with Iris West and Jean Loring at a local diner. The nerds dominate the dialogue, leaving the lassies to pass out in each others' arms. A radio broadcast is interrupted by word of a Mr. Element sighting in the diamond district, giving our heroes another excuse not to deal with their issues with women. The Atom and The Flash suit up, and the Tiny Titan is swiftly playing punch face with his foe Chronos. The time bandit marched on, however, and joined Mr. Element in crafting a particularly nasty hourglass-themed trap for the Scarlet Speedster that the Mighty Mite had to smash like a bullet. It all proves to be a distraction, as the Atom is immobilized by a pair of tiny energy bubbles. "What's the matter, Atom? Can't reach your glove controls? How do you make a clock ineffective, little man? You take away its hands!"

The aliens Sinestro and Agamemno were also party to this villain shindig, all part of a plan to swap bodies between members of the Justice League and their best known antagonists. The champions are briefly jailed at the Secret Sanctuary, but soon escape to plot against themselves to prevent the compromised Justice League from using their revered status to infiltrate global powers. The Atom/Chronos is the most on board with Batman's plan to frame the "Justice League" and smear their reputations, specifically pointing out the resources afforded to Superman/Lex Luthor in that department. (Silver Age #1, by Mark Waid, Terry and Rachael Dawson.) 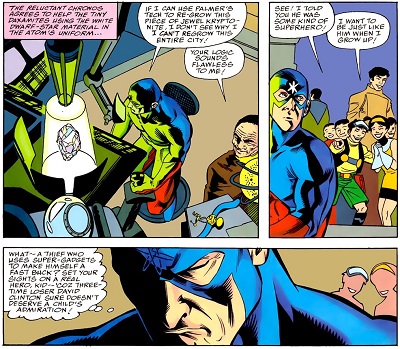 Chronos/Atom proves himself among the least polluted ersatz Leaguers. He vomits on Element/Flash's back after a super-speed jaunt, and peeks under the mask to learn Atom's secret identity, but otherwise is fairly well behaved. Chronos/Atom locates Jewel Kryptonite sought by Agamemno in a shrunken Daxamite city held by a deactivated Briainiac on an underwater ship. "Three-time loser David Clinton" is distressed by his being hero-worshiped by the Daxamites, who see "The Atom" as their last best hope to return to normal. Chronos/Atom is unwilling to abandon them once he's served Agamemno's plot, as he's "a thief-- not a monster!" However, Lex Luthor/Superman has no qualms about massacring the entire city under his boot of steel to prevent any other super-beings showing up on Earth, and Clinton is ultimately shamed into joining in on the stomping.
(Silver Age: Justice League of America, by Mark Millar, Scot Kolins and Dan Panosian.) 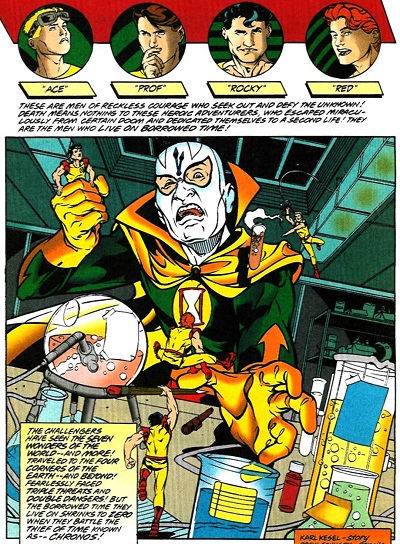 Snapper Carr alerted contemporaneous heroes about the Secret Sanctuary jailbreak, as the "Justice League" was preoccupied with completing their nefarious missions for Agamemno. Word reached Challengers Mountain, where its defenders used the internet and closed-circuit cameras to locate the Flying Sundial of "Chronos" as he's breaking into Ivy University. Ray Palmer was looking to use Professor Hyatt's time pool, which would require shrinking himself, but he inadvertently shrank the Challengers when they crashed into his lab. Even at doll size, the team prove a headache to "Chronos," until the Challengers' brain Walter "Prof" Haley determines through his delicate resistance that they had actually been fighting The Atom! Ray declares Haley the smartest person in the world, and they'll need it. The Challengers had only 15 minutes to return to normal size or else they'd explode, plus creatures from the future had begun crawling out of the time pool! The latter problem is resolved, but not with enough time to fix the former. Yet, the time pool is on their side, as "Chronos" lowers the Challengers into it to buy time. The heroes are restored, but not before seeing visions of their (sometimes dire) future selves, as well as the strange, unfamiliar heroes who will help them combat the body-swappers.
(Silver Age: Challengers of the Unknown by Karl Kesel, Drew Johnson & Randy Elliot) 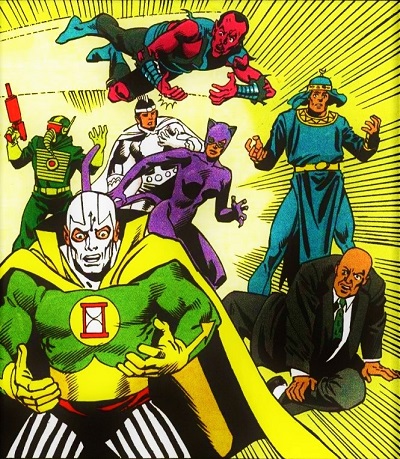 Chronos in the Atom's body joined the majority of the "Justice League" on a trip to Thanagar to acquire the Absorbascon. They were attacked by "Sinestro," who managed to use the Oan central power battery to cause the heroes and villains to revert back to their original bodies. Unfortunately, this also provided the Injustice League access to connect the Absorbascon to the power battery, which through the engineering of Lex Luthor and Chronos, allowed the villains to overcome Hal Jordan and the entire Green Lantern Corps.
(Silver Age: Green Lantern by Kurt Busiek, Brent Anderson & Joe Rubinstein)

Dr. Light joined the majority of the "Injustice League of America" on a trip to Rann to bind their acquired artfacts into a new body for Agamemno. While Rann suffered their presence, on Earth, Deadman gathered a team of previously unaffiliated period heroes into a 7 Soldiers of Victory revival to address this building crisis. Arthur Light was seen taunting and shattering the shield of Gardner Grayle during his lone adventure billed as "Shining Knight." Metamorpho came to the rescue, replacing Grayle's shield and activating a freeze ray built into his unfamiliar power armor that incapacitated the cowardly Light. However, Chronos and friends continued to utilize the artifacts to thwart capture and to betray Agamemno, claiming his power as their own.
(Silver Age: Showcase by Geoff Johns & Dick Giordano) 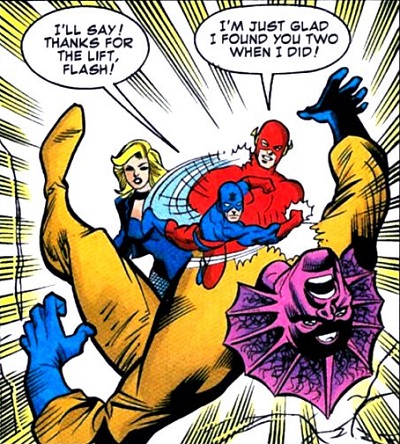 Flashback: Prior to the start of the event, Agamemno watches the Justice League of America on an alien world to determine their mettle. The Atom was paired with Aquaman, who was concerned about leaving Earth protected in the League's absence. Ray offered the Doom Patrol as at least a temporary substitute, but Aquaman dismissed them even more quickly than he did Atom's concerns that what Arthur was about to dive into might not be water as we know it. Aquaman soon went missing, leaving the Mighty Mite alone to locate another Leaguer. He finally found Black Canary, who attacked him until she realized Despero doesn't change sizes. For the record, she's not a natural blonde. Soon enough, the real Despero was located, a Canary Cry destroyed his means of teleporting away, and the Tiny Titan delivered the knock-out punch. None of this is particularly relevant to the larger story, but Atom doesn't have much to do in the resolution of that, and I wanted to add another nice picture before we wrapped this up.
(Silver Age Secret Files & Origins #1 by D. Curtis Johnson, Michael Collins & Vince Russell)

The nigh-omnipotent Injustice League threatened our heroes' loved ones, so among others, Jean Loring was rushed to Gorilla City in Africa for hiding. When that failed, the heroes went on the offensive, but a miniaturized Elasti-Girl & the Atom couldn't even overcome a mouse trap constructed by Catwoman's new purple power ring. Near defeat, the vision of future heroes finally came true, as Martian Manhunter brought Robby Reed and his magical H-Dial to transform the League into new identities. The Atom became the robotic Mod-Man, and Thanagarian Wingmen also joined the fray, but the day was mostly won by J'Onn J'Onzz, Deadman, and a revived Green Lantern Corps.
(Silver Age 80-Page Giant #1 by Mark Waid & Eduardo Barreto)