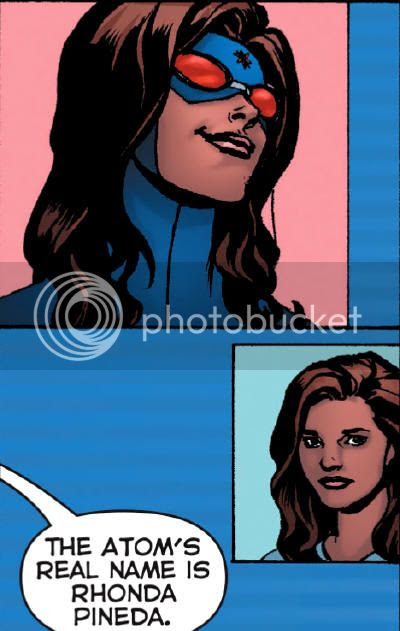 In the wake of "Throne of Atlantis," it was decided that the Justice League needed to expand its membership to include more dedicated full time heroes on the roster. Cyborg had become a nexus point for electronic information passing throughout the world, and used this facet of his abilities to create "The Grid," a directory of active super-heroes that he could directly contact as needed. In Pittsburgh, Firestorm was approached to join via an MP3 player, while in Baltimore, Cyborg used a billboard to assist and enlist Black Canary during a fight with Copperhead. Zatanna received a cell phone call in San Francisco, while the Atom was thanked for her help in Boston by her computer monitor during a class at Ivy University. The lot were joined for a recruitment drive aboard the League's satellite by Black Lightning, Blue Devil, Element Woman, Goldrush, Nightwing, Platinum, and Vixen. However, only Cyborg knew of Atom's existence, although Superman detected her tiny heartbeat as she lurked among the collected heroes.
The Metal (wo)Man Platinum was brought in by Cyborg as a test drive and favor to Doctor Will Magnus, but she malfunctioned and began attacking people. Magnus pleaded with Cyborg to save her precious "responsometer," so Vic Stone had the idea to have Firestorm convert her liquid platinum shell into water. Lacking coordination, the small responsometer was left to fall toward the ground as the rest of Platinum dissipated. The Atom made her debut before other heroes catching the responsometer before it could be damaged. A surprised Flash asked "Where did she come from?" The still shrunken Atom lifted her goggles up to her brow and said with a wry grin "Hi guys. Is it too late for tryouts?" 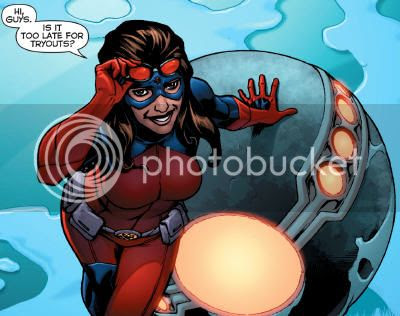 In a later meeting with the core seven Leaguers, Cyborg explained, "The Atom's real name is Rhonda Pineda. I invited her, but I wasn't sure she'd show. She's a little shy... an unsung hero. Something shut down one of Atlantis' bombs in Boston... It took me a few days to sort through the security cameras and the sat feeds. I didn't even see her at first. But she was there on the battlefield with us." Cyborg tracked her down, and along with Firestorm and Element Woman (who had also performed well against Platinum,) the Atom formed the trio of new members inducted. There was no time for celebrating though, as someone had hacked the League's computers and stolen files on their entire five year history...
"The Grid" was by Geoff Johns and Jesus Saiz. It was a mildly entertaining issue, with Black Canary dropping in a disparaging line about the absent Hawkman's lack of professionalism. So far, I've liked Saiz's take on the Pineda Atom best.
New 52's Day 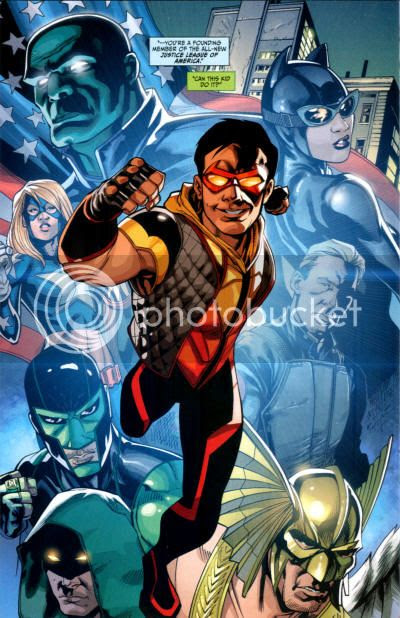 While employing the young Detroit-based hero Vibe as a P.O.V. character for the launch of a new J.L.A. line of books, Hawkman was brought up several times. In the debut issue, a head shot was used as part of a collage/montage/thingamajig introducing the team. In the second issue, ahead of being made aware of who his teammates would be, Vibe researched known super-heroes on the internet. "You don't think Hawkman will be there, do you? It says he's a cop from Thanagar who's now working with A.R.G.U.S. to uncover extra-terrestrial fugitives." Vibe's brother Dante noted "Hawkman's a cool name," unlike "Vibe." Later, Hawkman joined Colonel Steve Trevor, Katana, Vibe, Stargirl, and Martian Manhunter in front of the Capitol Building in Washington, D.C. for a press conference allowing President Barack Obama to announce the formation of the Justice League of America.

The stories were written by Geoff Johns & Andrew Kreisberg, with Pete Woods & Sean Parsons as the primary artists.
Posted by Diabolu Frank at 12:00 AM 2 comments 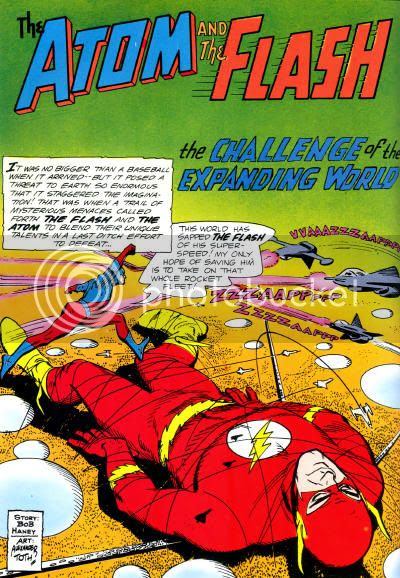 A series of unnatural disasters involving alien menaces plagued Central City. Barry Allen struggled to figure it all out. The ever-understanding Iris West moaned about their canceled date "Oh, no! Why'd I ever fall for a police scientist? If I were engaged to the Flash, he'd have time for me!" Barry reckoned she'd be even more steamed to learn that he was in fact the Scarlet Speedster, but the Flash's identity remained his secret. The Monarch of Motion dealt with something akin to lava, giant robots, and disastrous plant life. Understandably, this tuckered him out.

Meanwhile, famed scientist Dr. Willis Stanton made headlines calling on the aid of the Atom for a crucial experiment. At Ivy University, Ray Palmer couldn't resist the summons, and made the trip to Stanton's lab as the Mighty Mite. Stanton had found an inert green orb that fell from out of the sky, and needed an intelligent, maneuverable replacement for a missing electron to activate the orb. Meanwhile, the Flash had traced "molecular agitation" related to his disasters to Stanton's lab. Finding both men inside above reproach, the Scarlet Streak set aside his investigation to assist in the experiment. The Flash threw the World's Smallest Super-Hero at the orb at sufficiently high speed to penetrate it. This must have distracted the Flash, as he was then clubbed on the back of the head. 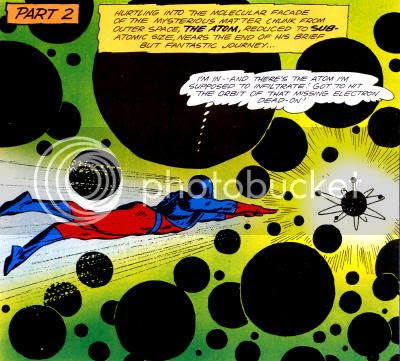 The Atom caused the intended chain reaction, but as he began to grow, he found himself in a world within the orb. One levitating vehicle was in pursuit of another, firing lasers indiscriminately. One struck the Atom, but it was surprisingly reflected backward, downing the pursuing vehicle. The vehicle he had inadvertently aided stopped to offer thanks and a ride, since the Tiny Titan had just made an enemy of Attila-5. The scientist Larnus and his daughter Arbellice explained that their planet had been imperiled by a rogue star. Science saved the day by shrinking the world to safety with a Molecular-Oscillator. However, the event generated such panic in the citizenry that Attila-5 managed a successful coup against their former ruler, Zarn. Attila-5's reign was diminished by science's inability to restore their planet to its normal size. Attila-5 had been remotely monitoring Earth (named as he was after Attila the Hun,) and sent his planet to be fixed there. Taking mental control of Dr. Willis Stanton, the experiments in restoring native objects that followed had led to the tumult in Central City.

Thanks to the Atom, the orb was steadily expanding back to normal size, but in the process it would eventually displace the Earth. The Atom had to keep adjusting his own size to keep up with the changes. Meanwhile, the Flash had recovered, and used his superspeed to vibrate into the orb. Within, the Scarlet Speedster was a towering giant, but he had lost his flash abilities and was wiped out by the effort. Attack ships blasted at the Flash, and he was eventually bound by tethers. The Atom discovered this just as Arbellice had begun hardcore flirting with him, but no time for love Dr. Palmer! 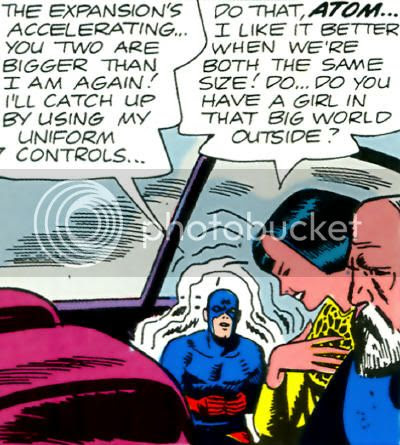 On this world, an adjustment in density sent the Infinitesimal Battler flying through the air. Ships fired lasers upon him, but by twisting and turning his body, the Atom simply ricocheted the beams back at the ships. "When I took on electron status to enter this world, it must've given me immunity to them!" The invulnerable mite freed the Flash, and with a device given to them by Larnus, summoned all their remaining swiftness to break out of the expanding orb. "GO, FLASH, GO!" Outside, they found that the poor town of Hadleyville had already been flattened (no mention of casualties) and USAF jets attacks were having no effect. Larnus' device caused the orb to divide into two equal and enlarging orbs, so the Atom directed the Flash to run around them so fast that they fell into a crater and got smooshed and reintegrated or disintegrated or something. The science was very bad, and the implications went unaddressed. Point was, one small orb exited the crater and flew off back into space.

Ray Palmer gave Barry Allen a call, explaining that Dr. Stanton's trance had broken once the orb left. "Well, it was great teaming up with you! See you soon... So long!" If Ray had hung on a bit longer, he could have heard Barry explaining to a girlfriend who is somehow even more of a shrew than Jean Loring that he was just chatting with a friend. "Hmmph! You waste time gabbing, but haven't time for our date... It makes a girl wonder if she's not just wasting her time being in love with you!" Seriously, there was fear in Barry's eyes and red-purple radiation emanating from Iris West's head.

"The Challenge of the Expanding World" was by Bob Haney and Alex Toth. The plot was dull and the science was dreadful, but the art was swell and how often does anybody get jobbed to make the Atom look infallible. Dude was pimping like Superman while poor Barry came off like a winded chump. I approve! 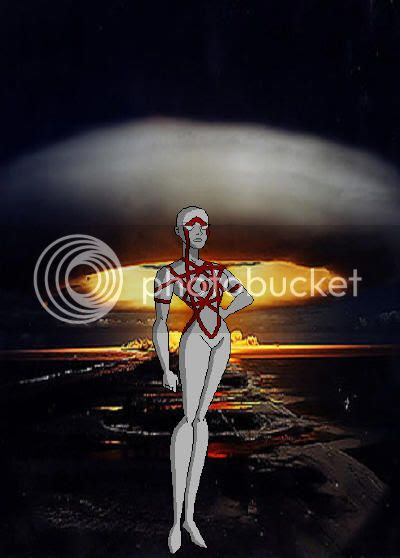 Here's the final offering in the fan fiction series of "NightwingTAS" revolving around an imaginary animated series version of the Nathaniel Adam super-family as featured on the Super Buddies message board...


"Nikola Hanssen of Earth-50 is the Void host and when Captain Atom visted her world, she had to reclaim her full power from Captain Atom. While doing so she sent him back to New-Earth, and destroyed, then recreated Earth-50. Nikola is the only person on Earth-50 who recalls the previous Universe, something she did not expect, nor did she expect Captain Atom to still possess a small part of the Void within him. During the aftermath of the Infinite Crisis Captain Atom carried a wounded woman to the paramedics and was taken by who he saw. One of the paramedics was Nikola Hanssen of New-Earth. Not fully recalling who she was but feeling a pull towards her, Captain Atom couldn't get her off of his mind, and during the Blackest night the two ran into each other again, this time while around a group of Star Sapphires who sensed in them a strong sense of love. Being urged together the two kissed igniting a dorment spark in Nikola who took the portion of the Void from Captain Atom, as well as a portion of his power, covering her in a Dilustel skin shell. her body resembling an amalgam of the Void suit and the coating that Captain Atom had during his stay on Earth-50. Like Bombshell Nikola can retract her Dilustel skin, what no one expected was what happened next, Captain Atom for the first time was able to transform back into a human form, and both he and Nikola recalled their romance from Earth-50. Now together again and in possession of this power Nikola decides to join Captain Atom as Armagedon."

Also today: Z'Onn Z'Orr: Santurian @ The Idol-Head of Diabolu
Posted by Diabolu Frank at 12:00 AM 0 comments