2010 Batman: The Brave and the Bold Atom Temporary Tattoos 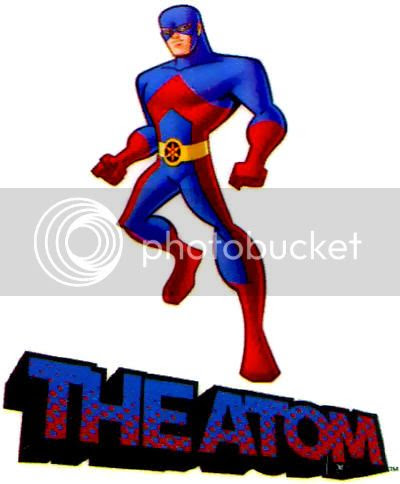 I may not be the biggest fan of Ryan Choi*, but I'm glad his fans got to enjoy him in the animated arena. The hybridization of his and Ray's costumes translated well. He's so much better than Ray, it's not like he needed to borrow his style to go with the exact same name and power set. C'mon though, Ray Palmer didn't ask for Al Pratt's girdle, y'know, but whatever. It might have been about the jock itch, because Al never struck me as especially hygienic. Nothing beats crimefighting with cowhide against your bare ass, amIright? Anyway, I'm pretty sure the generation of fans raised on the cartoon will rise up and kill Ray Palmer for good is 2023, so you've got that to look forward to, assuming there's even still a comic industry by that point. It'll probably all be flash animation by then, or something. 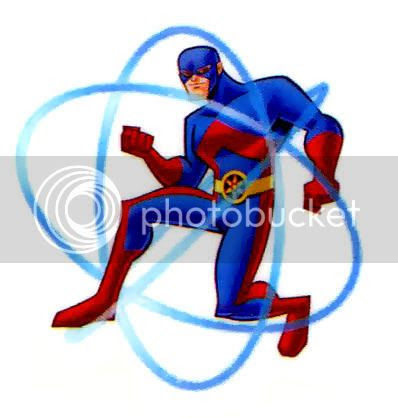 The "logo" is in the same font for all the characters in this tattoo set, but the figure tat was kind of small to take up that much space, so I stuck them together. They're basically Colorforms for human flesh, so I guess you could have Ryan Choi surf on a logo anywhere on your body you like. Anywhere. He could also carry the logo that is your sin upon his back, or he could poop his own logo. It's really only limited by your creativity/depravity.

The Irredeemable Shag of Once Upon a Geek is always coming up with Ryan Choi stuff like this for the blog, which leads me to believe I'm the Deathstroke to his Dwarfstar in regards to poo-pooing his matchbox legacy. Shag shows a good deal more tolerance toward Jason Rusch in his comprehensive overview of Firestorm & Company on these Temporary Tattoos. Shag also afforded me the opportunity to dress-down Despero, for which I'm opportunistically exploitative "eternally grateful." I also finally knocked out a post on B:TBATB Sandylion Sticker Bits, if you've been dying to live out the fantasy of the Atom firing a really tiny Green Arrow off his (non-euphemistic) Bangstick for a change. That, or maybe play Table Soccer with the little bastards. I think Ray would be classy and just buy them all doll chairs for his Card Table of Justice.

*He's Asian, so he gets small! Shouldn't he also speak in Confuciusisms and practice martial arts?
Posted by Diabolu Frank at 12:00 AM