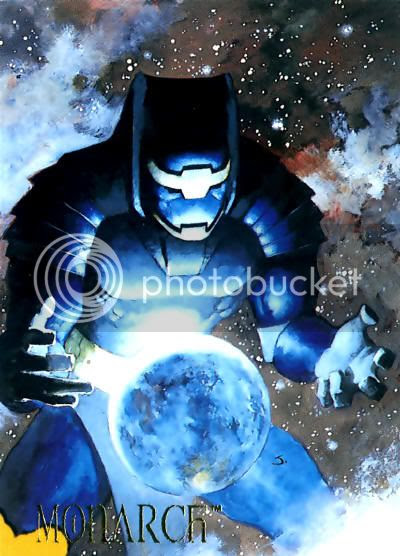 Shot into the quantum field as part of a top secret experiment, Nathaniel Adam developed space/time warping powers and acquired the armor of Monarch. Now, the new Monarch plans to gain enough international popularity to become world dictator. His plan wickedly ingenious... but I could still give him a few pointers.

Let me see if I can break this down: The villain of the Armageddon 2001 annual event of 1991 was supposed to be a super-hero who betrayed and killed all his fellows to rule the world as Dr. Doom Monarch. The big reveal was to be that Captain Atom was Monarch, but plans changed so that it was Hank "Hawk" Hall instead. This made absolutely no sense, but Captain Atom fought Monarch until both slipped into comic book limbo. Then Hank Hall became Extant, which made only slightly more sense, and a new Monarch was introduced who was supposed to be the real conniving Nathaniel Adam to Captain Atom's altruistic quantum duplicate. That Monarch was forgotten about, and then Captain Atom returned from the Wildstorm Universe to have his skin breached by a Watcher Monitor and the Atomic Knights place the wounded Captain Atom in a new containing suit like Monarch's. Then Monarch turned paranoid and evil and raised a multiversal army he honed in a gladiator arena before trying to destroy the Watchers Monitors and their multiverse, except for one central world that he would rule for reasons undercooked. That Monarch was defeated and forgotten about, so let's pretend that Monarch was the quantum duplicate Nathaniel Adam who hopefully wasn't the original, and that Captain Atom's continuity isn't a gaping hole of suck, okay?