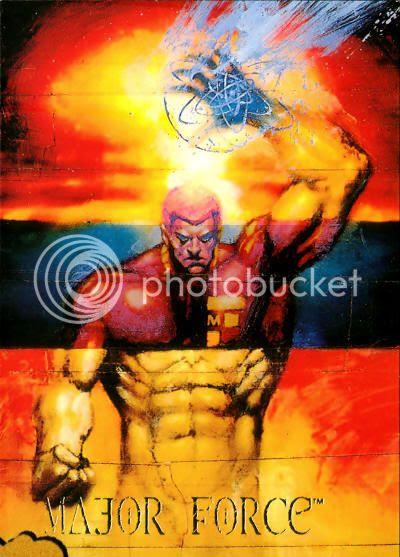 Recruited for a secret government project, former Air Force Sgt. Clifford Zmeck -- court-martialed and under life sentence for murder -- was thrown into the quantum field and transformed into the superpowered Major Force. In or out of prison, he remains a most deadly killer.

Villains who serve as dark analogues for the heroes they fight was nothing new in 1988, but I find it amusing that Major Force predated the debut of Venom by just a couple of months. In terms of physique, demeanor, and even haircut, Eddie Brock and Cliff Zmeck had a lot in common. Yet, I like Major Force, and often use Venom as an example of how to make a cynical, pandering, unimaginative bad guy. I suppose my personal biases come into play there. Card art by Thom Ang.

I'm not the only blogger relishing New Year's Evil this week. Find more malicious pin-up fun at the following: