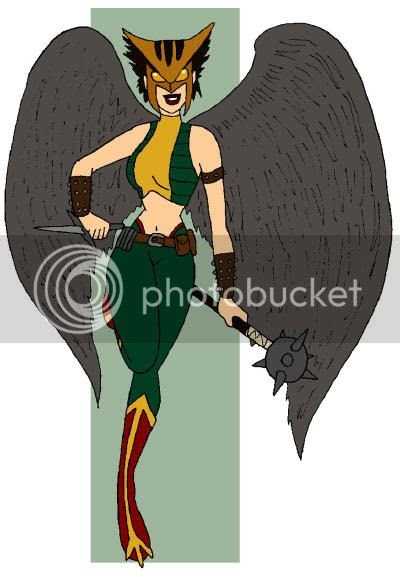 "They're fun, they're sassy and they all seem to have a mean right hook. For years, DC Comics has consistently created amazing female superheroes. I'd like to pay tribute to these amazing women of the DC Universe with one of my patented pin-up series -- Ladies of DC! Eighth in this series is the hip Hawkgirl!

Probably one of the more recognizable heroines thanks to the Justice League cartoon, Hawkgirl is a prestigious mantle in the DC Universe. The Hawk title refers to strength, perseverance and physical prowess -- but it also means tragedy. Kendra Saunders has been Hawkgirl for just a little bit over a decade and yet she's already got an amazing resume. Having served on both the JSA and the JLA, Kendra has proven herself as a hero. I've read both volumes of hers when she got her own title and rather enjoyed her flirtation with Roy Harper when she was in the JLA. Hawkgirl is a character I definitely admire. I absolutely love her modern look and hope that she's a character who'll last."

Posted by Diabolu Frank at 3:18 AM 0 comments 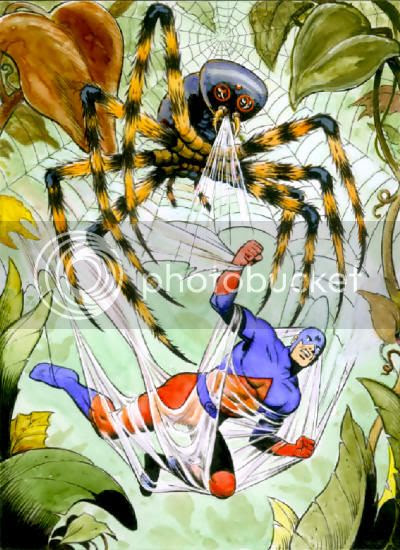 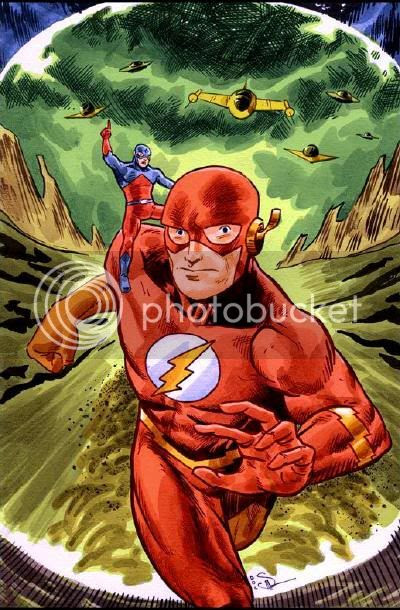 "This one's based on the cover to Brave and the Bold #53 . Alex Toth did the interiors for this issue and it's still one of my favorites."

Posted by Diabolu Frank at 2:58 AM 0 comments

• “Son of Satan’s Ring” part two!
• FRANKENSTEIN and NINA are swallowed by the LEVIATHAN, a whale-like beast that contains an entire city inside of it. Luckily this is where they need to be to track down the S.H.A.D.E. mole!

• CAPTAIN ATOM has regained his human appearance – but how is this possible? What has he done to himself? • Wishes are coming true all around him – what will the price be?

• HAWKMAN inches closer to answers about who he is and why he is being hunted! • Introducing ST. BASTION! He’ll stop at nothing to discover the secrets of the scrolls Carter Hal revealed in issue #9

I was chuckling over how bad this cover was, but it's Joe Kubert in comparison to the one Rob did for Deathstroke . Lobo's the Mime of Muscle Beach.

They managed to get Rob Liefeld's name in the credits three times, but he couldn't manage a single nose between the two characters depicted on the cover.

Posted by Diabolu Frank at 7:21 AM 0 comments

1967 The Superman/Aquaman Hour of Adventure: The Atom Segment Intro

"Through the magic alchemy of nature's most awesome sources of energy, Ray Palmer: Atomic Physicist becomes... THE ATOM! A power-packed Mighty Mite, whose brilliant mind and great strength serve law and order against crime and injustice. Tiny Titan! Scourge of evildoers! THE ATOM!"

As a child, and this is still somewhat true today, my barometer for a super-hero's popularity/cultural impact was their multimedia penetration. For instance, Superman was obviously the top dog in the early '80s, with numerous cartoon series, several box office hit movies, and a live action TV show. Batman was a distant second, because he really only had the one Filmation cartoon series repackaged over and over again, but he could fall back on the Adam West TV show/movie that brought on Batmania in the '60s. Still, dude was slumming in Scooby-Doo cartoons with Robin (who also deserves his place on this list.) #3 would be Spider-Man, who had two cartoons and a short-lived TV show that was repackaged into lousy Saturday afternoon movies. Also, he was the guy other heroes got exposure guest-starring with as his "Amazing Friends." The Hulk was arguably fourth, since his TV show reruns were big in syndication, and he had his own cartoons. Wonder Woman was better known by everybody though, and even if her sole animated avenue of regard was Super Friends, she still had her own live action series. Bringing up the rear of the upper echelon was Aquaman on the other side of that equation, having his own cartoon, but no live action; and Captain America, who had cheesy TV movies and limited animation opportunities, but broad public recognition.

From there, you had the Fantastic Four, who had their own cartoons that nobody I knew cared about, and then the segment players. The Marvel Super Heroes featured Thor, Iron Man, and Sub-Mariner, who shared crudely animated segments. Superman/Aquaman Hour of Adventure hosted spots for the Flash, Green Lantern, Hawkman, the Teen Titans, and a version of the Justice League of America lacking an Amazon, Martian, or millionaire playboy vigilante. The Atom had his own slot, and one with the JLA, plus he appeared occasionally on Super Friends. In my mind, that made him a top 20 super-hero, and I liked his adventures more than most of his DC contemporaries on that show. However, those segment shows were produced in the 1960s, so they were dated even by my childhood standards, as was their reflection of the pecking order. Further, while the Marvel heroes got thirteen character cartoon segments at seven minutes each, the DC heroes only got three a piece. That means the equivalent of maybe one episode of a Superman or Spider-Man cartoon. Finally, in the decades since, the Mighty Mite has only guest appeared on other shows. I think it's safe to say the Atom isn't on anybody's objective top twenty list anymore, but I love the little guy! Also, this intro is great fun, and thanks to my fan-made Martian Manhunter theme aping it, I will likely forever hear Ted Knight's voice bellowing whenever I think of "THE ATOM!"

Always remember kids, "Against the force of evil, the Atom will succeed!"
Posted by Diabolu Frank at 12:00 AM 4 comments