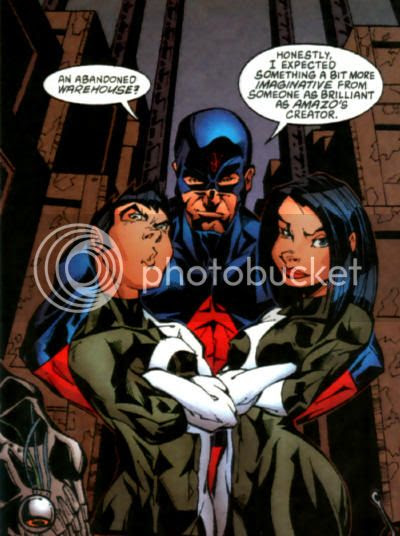 A new villain called Oblivion began causing trouble, including kidnapping the JLA. Strangely, the bad guy looked exactly like a doodle Kyle Rayner had come up with as a kid. Even weirder, the last Green Lantern was next joined by a small corps of same, supposedly from various times, and none familiar except for Kyle's undead ex-girlfriend Alexandra DeWitt. Rayner paired off these new Green Lanterns with other heroes who would supervise their actions until the JLA could be found and Oblivion dealt with.

While the other strike teams were away, the Atom remained at the JLA Watchtower to coordinate their activities. Two members of a futuristic Teen Lantern Corps, Hunter and Forrest, whined about being stuck with him while wasting their powers and experience.

"HEY! What did I tell you, Forrest? I don't want to hear anything about my future! Period! Just having you two here upsets the space-time continuum significantly more than I'm comfortable with." Besides, "I'm not leading any more Teen Titans, thanks. Besides, you two don't even have your own power rings." Hunter and Forrest were supposedly descendants of Rayner's, the only people who could wield his ring, and thus had to time-share it. Still, Ray had been young once or "Twice, actually," so they managed to convince Palmer to take more direct action. 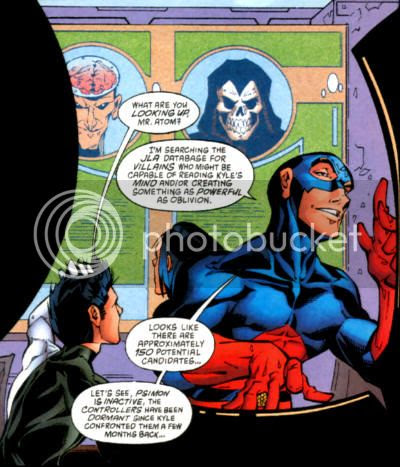 "In the real world, comic book characters don't just come to life. There has to be a logical answer to this villain's existence, and Ockham's Razor tells us that the simplest solution is almost always the correct one." Palmer's theory was that a known super-villain capable of reading Kyle Rayner's mind had manifested Oblivion, so he complied a list of suspects from the JLA computer banks. After eliminating the least likely possibilities based on their current circumstances, the Atom came up with four worth leaving the Watchtower to investigate.

First up was Batman's foe the Scarecrow, which made no damned sense, given his lack of telepathy, interaction with Rayner, or ability to manifest anything but pity over being a second rate Gotham nutjob. So of course he got the drop on the trio, at least for the cold opening of the book before a flashback and fast-forward. The Tiny Titan shrank until fear gas no longer affected him, then saved the boy Forest from being electrocuted when his ring was left near the third rail of a subway track. The Mighty Mite used his rubber soles to collect and fling the ring, which Forest wielded to instill fear in Dr. Crane by creating a Batman construct. 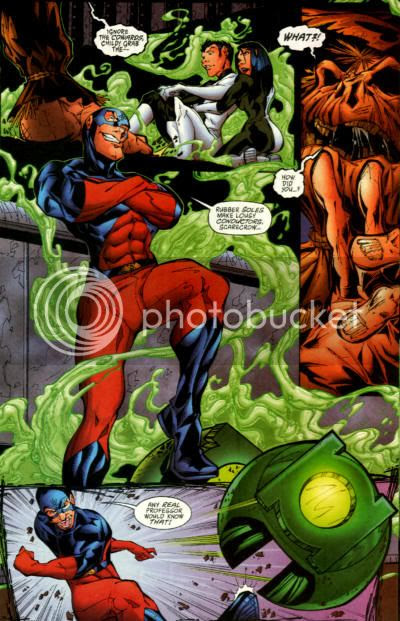 Suspect #2 was found at Barnard College. "Don't underestimate Doctor Psycho... He may be small, but he's taken down Wonder Woman... Psycho is high on our list of suspects because he has the ability to give shape to ectoplasm that he's drawn from a human medium's imagination. Creating Oblivion doesn't necessarily fit his modus operandi, a psychotic hatred of all women, but..." Forest tried to take Psycho out with a flock of cherubs, but the Doctor turned it around... partially. "Young man, prepare to be ripped apart by your own thoughts... How...? Your mind... just an illusion! It's... it's nothing but lies!" No matter, as Psycho culled a giant black Schrödinger's cat from Ray's gray matter. That left the power ring and salvation to "the weaker sex," as Hunter subdued Psycho by beating the midget with constructs from out of the book Little Women.

Suspect the third was found in an abandoned warehouse. "I'm disappointed, Professor Ivo... Honestly, I expected something a bit more imaginative from someone as brilliant as Amazo's creator." Ivo was up for snaps. "Well, well, well... It looks as if the Microscopic Man has found a new children's crusade to run into the ground." Large robots were activated, and Ivo assumed Atom was a "wee coward" who "shriveled off to the subatomic realm" while the Green Lanterns fended for themselves. Instead, the Mighty Mite was literally inside the immortal Ivo's head. "Who said anything about killing? In another thirty seconds, I'm going to start rearranging synapses... and you can spend eternity with an IQ of four." Atom tortured a confession of non-involvement out of Professor Ivo. "Please... please don't hurt my precious brain." Finally, the group checked on Dr. Light, "one of Kyle's greatest foes" who could have potentially created Oblivion as a living hologram. Ray had his own history with Arthur Light, but a search of Kyle's apartment found the villain still safely tucked away inside a power battery. "I don't believe it. My... my logic was flawed. I've failed..." Hunter consoled the egotist that the adventure had led to the apprehension of three dangerous felons. Forrest made the discovery that Emerald Knight, another Green Lantern off on a mission with Power Girl, had also been sketched by Kyle as a kid. What that meant would have to wait, as Atom, the kids, and the other teams were all being paged to Oa by Kyle...

"Unusual Suspects" was by Brian H. Vaughan, Trevor McCarthy and Tyson McAdoo. The whole premise of the crossover was dumb, and the character selection seemed geared more toward protecting trademarks than offering a spotlight for underappreciated heroes. Vaughan wrote two of the six one-shots and the bookends, dropping a lot of hints toward the conclusion of the story in this issue. I don't know if they paid off, because this is the only one I've read, and it was too lousy to make me want to sample any more. The Teen Lantern Corps members present were as annoying as their seeming models, the Wonder Twins. The villain selection was illogical and underwhelming. The resolutions to the various battles were too clever by half, smugly grating. The jokes were painful groaners, and the art ugly as sin. This came out in that time period after the publishers forced everyone to switch to paying more for glossy paper stock, only to temporarily try to revert to a cheaper rough and dull stock that made the coloring look wretched. Bad stuff.
Posted by Diabolu Frank at 4:33 AM 0 comments 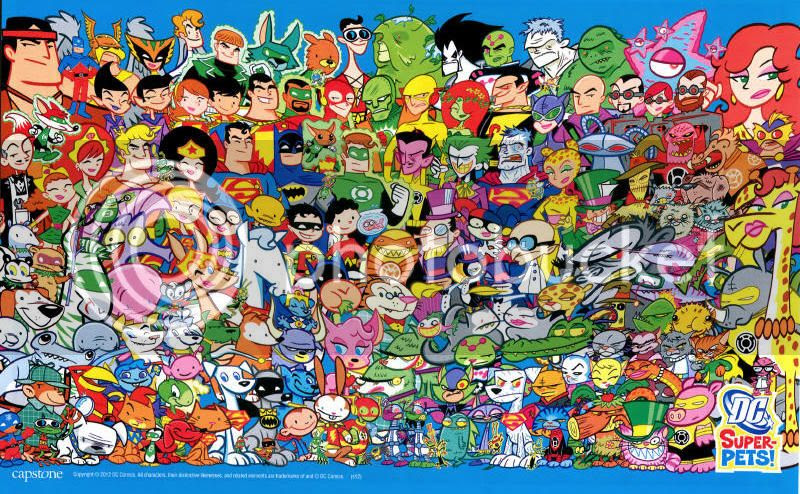 I found this spiffy piece in the Free Comic Book Day offering The Incredible Rockhead & Zinc Alloy 2-For-None! The Ray Palmer Atom is standing on the shoulder of a giant, Apache Chief. Hawkman, Hawkgirl, and Elongated Man are appropriately all to his left. Ryan Choi's pseudo-girlfriend Giganta is on the opposite side of the page. At the bottom left is Ray's dog Spot, because of course it is.

"Cut along the doted line" dashes were provided for easy posterfication, but my scan was slightly lopsided, so I cropped them out. 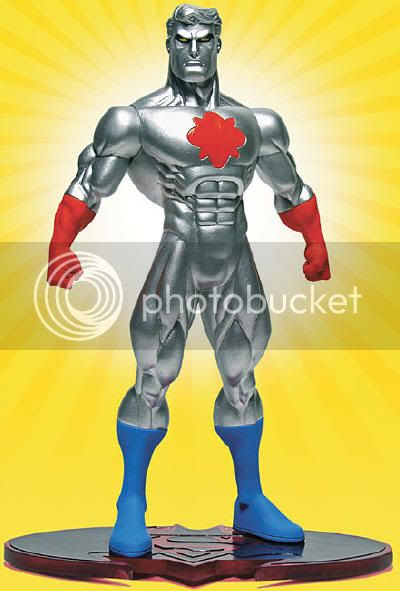 SUPERMAN/BATMAN SERIES 1: PUBLIC ENEMIES: CAPTAIN ATOM ACTION FIGURE
Based on the art of Ed McGuinness! The atomically powered Captain Atom reluctantly confronts the World's Finest team on the order of his evil Commander-in-Chief. This figure features multiple points of articulation and includes a Superman/Batman logo base. Packaged in a 4-color deluxe blister.

If I ever catch this for a good price, I'll buy it. He's a bit bulky for my taste, but it captures a lot of the spirit of the character's Post-Crisis high point.
Posted by Diabolu Frank at 12:00 AM 0 comments