Here's The Atom's pet, as created by Art Baltazar and Franco, who apparently debuted him in Tiny Titans #9 (December, 2008.) He's a smart little guy, and surprisingly gets a full page entry. I'd have figured Ray Palmer would neglect his pets as an always distracted physicist. He could have used Spot all those times he got attacked by cats! Spot's buddies are the pets of Hawkman, Superman, the Flash and Apache Chief(?) His foes are familiar to Giganta, Poison Ivy, Captain Boomerang, and Bat-Mite. So even the mutt's got to borrow for decent adversaries? The full color magazine sized 128-page book is available for just $7.95 in paperback or $18.95 in hardcover from Picture Window Books, a capstone imprint.

Minimalist Movie Posters
Posted by Diabolu Frank at 12:58 AM 0 comments

From their Earth to ours, the villainous members of the Crime Syndicate—Johnny Quick, Atomica, Owlman and more—invade your home with all-new action figures based on designs by superstar artist David Finch!
EACH SOLD SEPARATELY
$24.95 US • On Sale March 2014 * Allocations May Occur

This was a nifty little reference book published by Workman Publications where you have a series of die-cut glossy stock cards detailing super-hero stats instead of recipes for margaritas or the circle of life for jungle beasts. Despite Ryan Choi still being around at this point (right?) the card features Mark Pajarillo art from an issue of JLA discussing the life of Ray Palmer. It focuses on his origin story, first Justice League adventures, some highlights from Sword and Power, then veers into Identity Crisis and finishes with the gist of Countdown to Final Crisis. That's a damned lot of information for one two-sided card about the size of a bookmark. There was even room for a tiny second picture!

Big thanks to The Irredeemable Shag for the pictures! Check out the links below for his full write-up of this novelty.

Fandex
Posted by Diabolu Frank at 12:00 AM 0 comments

Posted by Diabolu Frank at 1:05 AM 0 comments 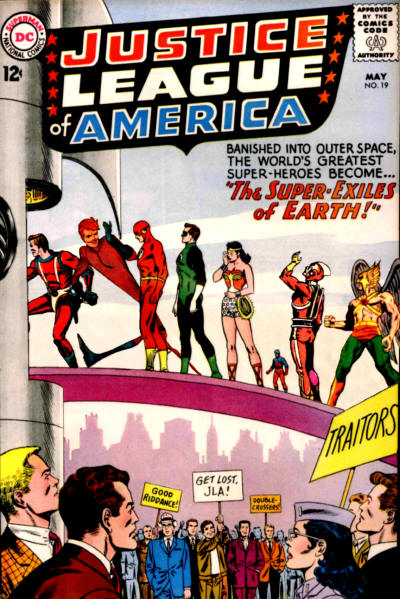 If you look at the history of comics, there are certain key moments that shaped the medium. Comic strips had been popular for decades, but a lack of available, affordable reprint material was the reason why original comic book stories were first pulled together. Early comics aped strips and pulps, but the dynamic debut of Superman gave the medium its first and most iconic wholly owned concept. Regardless, super-heroes had become passé by the end of World War II, and with the exception of Superman, could have faded away entirely. If not for Frederick Wertham's crusade wiping out the market for the once hugely profitable crime and horror comics, DC editor Julius Schwartz might never have cast about for something he could sell within the strictures of the new Comic Code Authority. Without his super-hero revival, Batman may not have sustained himself to reap the benefits of Batmania, Wonder Woman would have surely perished, and no Justice League of America means no Fantastic Four, and therefore no Marvel Comics. Everything changes.

It's worth pointing out that editors Mort Weisinger and Jack Schiff originally refused Schwartz full use of Superman and Batman in his Justice League. They can be seen as pieces on Despero's chessboard on the first issue's cover, and were caught on Felix Faust's fingers on the tenth, but aside from these sort of cameos were barred from routine cover appearances until thirty issues into the ongoing series. The pair turned up in most stories, but were explicitly shown as not having founded the team in flashback adventures. Weisinger & Schiff felt that using Superman and Batman to promote Justice League of America would dilute their appeal in the solo books, but just imagine if they took the matter further. What if they outright refused the World's Finest duo, and further, how about if they withheld their other characters, Aquaman and the Martian Manhunter? The JLA would have had its membership handicapped by the same number of participants as made up the Fantastic Four!

Just to show how close a call pulling the JLofA together was, I should mention that Hal Jordan made his debut as Green Lantern in a book cover-dated October 1959 while The Brave and the Bold #28 was February-March 1960. There was clearly no time to create and test any other brand new characters or reworked revivals in that four month window. If Julie Schwartz had been refused other editors' characters besides Wonder Woman, on permanent loan from the more amenable Robert Kanigher, he would have had a big enough hole to fill that he'd likely have rifled through his own moribund properties. Julie Schwartz had edited All-Star Comics in the 1940s under Whitney Ellsworth's name, which was probably why he had the Justice Society and its major members to play with in the first place. Since he'd already consigned the Golden Age heroes to mere comic book characters in Barry Allen's stories, and Earth-Two wasn't conceived yet, Schwartz basically had his leftovers to work with. His western characters wouldn't have made sense, and his animal champions Detective Chimp and Rex the Wonder Dog would have been a stretch. Under these conditions, Adam Strange would have been a shoe-in, and if Schwartz insisted on a quintet, the similar Captain Comet could have been dusted off. Elongated Man was also around in 1960, and was eventually popular enough to gain his own back-up strip, so he should have had an early entry into a less populated team.

The Justice League as published was such an immense success that it moved from a three issue trial in an anthology title to an ongoing within a matter on months. However, that team consisted of the mightiest heroes of the time. Still, if Reed, Sue, Johnny and Ben could make a splash, I'm sure Diana, Barry, Hal, and the Adams could have done respectable business. Perhaps their ongoing series would have waited until 1961, by which time the Silver Age Hawkman and Hawkgirl had been introduced. Surely, the Ray Palmer Atom would have arrived by 1962, the same year a more expansive real world Justice League inducted him?

And so, to satisfy my curiosity and hopefully amuse you, above is a mock-up cover for the Justice League of America #19 that could have been!
Posted by Diabolu Frank at 3:13 AM 2 comments