Power of the Atom Podcast #612 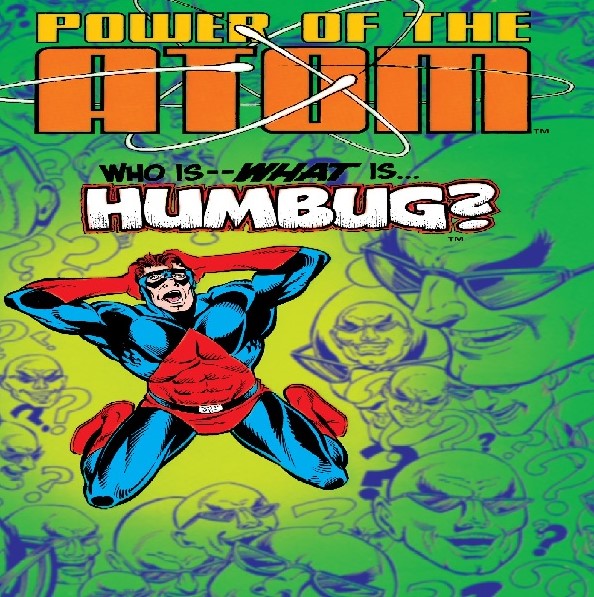 A bald Caucasian mercenary with bushy inward-slanted eyebrows under sunglasses listened to a disembodied electronic voice give him orders to target Ray Palmer in Ivytown. Wearing a fashionably formal all black leather outfit with gloves, broken up only by a fuchsia ascot with black polka-dots, the villain rose from a futuristic chaise lounge to view a circular screen projecting footage of the Atom in action. Mimicking the Mighty mite move-for-move like a depilated Taskmaster, this so-called Humbug was chastised for not paying attention. Able to chew bubblegum and jump snap kick at the same time, Humbug was well aware that Ray Palmer jad vanished eighteen months prior, only to spring up in the past six weeks to become a hang-up in someone's master plan. At one point, Humbug removed his sunglasses, revealing pupil-less eyes and that he had been wearing a fake nose to cover the smooth patch down to his lipless, toothy grin. He them bent a wrench in his bare hands, demonstrating great strength, not that we could possibly take him seriously going forward now that we know he's basically wearing a Groucho Marx novelty disguise. Say, did you ever notice that Peter O'Toole is a duophallic name?

At the home of Professor Emeritus Alpheus V. Hyatt, Ray Palmer was demonstrating density-control enabled one-armed push while topless for Ricki Negrini, who he's totally not trying to smash. There's a demonstration of how the Atom can don his costume automatically by shifting it onto his body from another dimension, and Negrini questioned whether the intermittent light show was dependent upon his mood. Norman Brawler showed up to has out the details of their travel plans to New York for a meeting with Warner Books to sign contracts and negotiate promotion for the upcoming revised paperback edition of his biography. Norman would have to catch a plane alone, because Ray intended to literally phone in for his part once all the arrangements had been made so that he could continue researching his enhanced abilities. Also, his fellow scientists had to help talk him into going forward with the new edition, after all the headaches the hardcover had caused upon his return. As the punchline to a thing that in theory resembled a gag, the scientists also threatened to go on tour with an a cappella rendering of the 1909 hit "By the Light of the Silvery Moon." Boy, it's a good thing the average comic reader of 1989 was up on references to a 1953 Doris Day musical. DC Comics: Please share us with your grandparents! We'll take what audience we can get! Yes, comic books are a dollar now! We know you're on a fixed income, but maybe you can haggled for a discount at your local comic shop! We know gas is currently 66¢ per gallon and burning it in a drive would take longer than reading this comic. Look, can you just give it back to little Timmy? What do you mean he's reading The Punisher?!? What kind of grandparent are you? You took Timmy to see Death Wish 3? No yes, of course we'll miss the Gipper, too. You know, this is a long distance periodical, we'd better go before the rates go up again.

In Calvin City, Ray's ex-wife and her new husband argue about having caught her in a kitchen embrace with Palmer as she was consoling him over the deaths of Princess Laethwen and her people in Morlaidh. Paul Hoben's insecurity will be referenced again at the end of the issue, as he determines that the only way to win back Jean Loring's heart is by digging an old Atom belt out of the basement and perform some size-alterations himself. I don't think it's a pee-pee thing, but when you use a size-altering belt as a marital aid, it seems like maybe it's a pee-pee thing. I mention it now because I don't want to have to set this stupid subplot up again because we're all going to forget I'd mentioned Paul Hoben by the end of this thing, and these synopses are only about five minutes long. It's not the length of the podcast, it's the snore of a subplot.

Since the C.I.A. had been covertly monitoring Ray Palmer's movements, Humbug arranged to impersonate their superior on a telephone call, then orders the agents to Salt Lake City. I guess that means he's a master of impersonations, at least. Continuing that theme, Humbug next served as Paul Hoben's can driver, as a window washer outside Warner Books, and finally as a gopher bringing coffee into the meeting. Ray is pushed through the phone line by Professor Hyatt singing the 1939 duet "Deep Purple" by Nino Tempo & April Stevens, in case Little Timmy wants to ask Great Uncle Jedidiah about this comic bo-- little Timmy never picked the book back up again, did he? This is how we get cancelled in the same number of issues as Wasteland and how Doc Savage outlasted us, isn't it? This is why the Blackhawk revival is more fondly remembered? Because on page 14, after spending three pages on details of the book publication contract, the bad guy finally attacks the good guy with pink gas pellets?

The Atom shrank to avoid the knockout gas, but immediately got suckered into growing and coughing, but shrank again to escape. There was a running fight through bland office spaces across routine five panel pages of serviceable art involving the Tiny Titan landing a punch that knocked the stupid glasses/rubber nose combo off. Atom noted Humbug's resistance to the gas, great strength and endurance, and finally his vanishing into himself, leaving a full body husk of probably artificial skin. Oh, and Humbug was still in disguise the whole time, wearing a green windbreaker, khakis, and white sneakers. Appropriate, since Power of the Atom is the khaki of comics. Humbug was back in his cruising dandy outfit to be berated by his anonymous boss over the unauthorized, high profile attack, but Humbug was rude and kooky and a tad insubordinate while swearing that he's get 'im next time. Yep, just a big ol' pile of khaki right here.

Jean Loring,POTAcast,Power of the Atom,Ray Palmer,
Posted by Diabolu Frank at 1:46 AM 0 comments