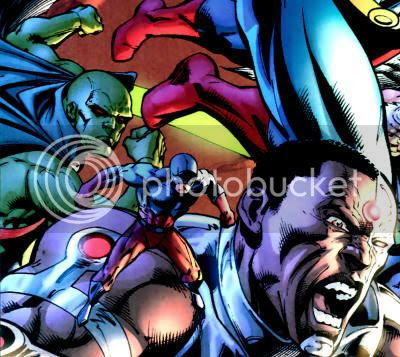 Thanks to @AquamanShrine, I checked out IGN's The Top 25 Heroes of DC Comics article by Jesse Schedeen. As these things go, it's a pretty solid countdown, but also somewhat damning. Damian Wayne takes last place, despite being the most interesting character DC's created in the last decade or so. That said, he's also the fourth semi-permanent bearer of the Robin mantle (fifth if you count Stephanie Brown, and let's not even open the door to multiversal/interpretative variants.) Robin was the sensational character find of 1940, whereas Damian was just a more acerbic Jason Todd with a better pedigree of sperm + ovum. Damian is one of two Robins to make the list, plus two Green Lanterns and two Flashes. It's like seeing a countdown of the top ten soda brands and realizing a quarter of the list is simply the diet versions of the same drinks.

Ray Palmer came in at #24, with his scientific acumen, genre versatility, and troubled history highlighted. While I was happy the Atom didn't get shut out by someone like Lobo, he still occupies the "obligatory inclusion" realm. Ahead of him was Cyborg, the only non-Caucasian human on the list. Cyborg isn't even DC's best African-American hero, and he's spent the two years of New 52 comics as a glorified teleportational chauffeur/ doorman/ receptionist, but he's in the JLA and the list needed "a black one."

Hawkgirl was #22, having replaced Hawkman in the hearts of fandom through her appearances on the Justice League cartoon and by virtue of being defined as a saucy redhead instead of the dude who's angry all the time. But then she was beaten by Starfire because breasts and because the only version of Hawkgirl currently in print is an off-brand on Earth-2. Jonah Hex beat both the ladies despite being a Clint Eastwood western pastiche with a scar and a perpetually low selling book. Booster Gold is totes important as the materialistic fame seeker who got to cash in on remorse over his friend get capped in the head. With Time Travel! If I could be bothered with the effort, I'd work in a Doctor Who slam, but nope.

Excluding John Constantine at #16, the rest of the bottom ten are all handicapped by a lack of y-chromosome: Black Canary, Supergirl, and Batgirl. I'm kind of proud of Ray for being the official white guy thrown under the bus to help promote the women and minorities seated at the back of said bus. Let's just not bring up the Asian kid that got knifed so Ray could return as the Mighty Mite...
Posted by Diabolu Frank at 10:53 AM 1 comments The Atom was set to shrink Gorilla Grodd to nothingness if he tried anything funny after he was given back the exhausted yellow power ring that had previously been unlocked for his use by Sinestro. Meanwhile, Lex Luthor had its power battery shrunken and hidden in a pouch on his person as a failsafe from Brainiac. The Tiny Titan shouted "finally" as he restored the battery to useful dimensions. While the Martian Manhunter worked with the villains to stop nuclear missiles from incinerating the planet, the Atom was more concerned with water. Solomon Grundy had punched out an exterior wall of the city-sphere, which was submerged, so the whole "town" was rapidly flooding. In Scarecrow's city, Red Tornado blew fear gas away from the citizenry, then determined that Brainiac had escaped by shifting his "primary program to another body." Zatanna teleported Superman and Red to the Toyman factory the Hawks had destroyed, where they found Brainiac's consciousness temporarily resided. Brainiac explained that he was trying to recreate Colu by turning humans into nanite-infested automatons, then disappeared to another location. Tornado had an internal monologue about the limitations of Zatanna's powers, which made no sense in context, since the creators had to give Red a cybernetic tracking connection-amabob to Brainiac for him to have any story mileage. Meanwhile, Zee was providing transportation across all the literal mileage covered (and Zee also seemed to track Brainiac independent of Red, so so much for that.) At other locations, Brainiac tried to convince RT to turn on the humans, like a dime store Ultron talking down to the Vision. "Chapter Twelve" was plotted and painted by Alex Ross. The script was provided by Jim Krueger, and the penciled layouts by Doug Braithwaite. Justice was kind of a modern deconstruction of an old cartoon, but it doesn't stand up very well to deconstruction its own self. The Atom had a fairly large role in the story, including a spotlight issue, but his arc consists of getting hurt, worrying his wife, fighting a Wonder Woman foe, saving his wife, and carrying the weight of science stuff for the heroes. "Love and protect your (psycho bitch adulteress) wife." That's deep, yo. Red Tornado served the Red Tornado role of getting violently torn to pieces to establish a threat against his team and then serving a minor, dubious role in evil's defeat. Red got to have a weird forced relationship with a Superman villain who was doing the same thing with Aquaman on the DL, and he got to hold Brainiac's ship after it had already been shrunk and frozen. It's the costumed equivalent of holding your girlfriend's purse at the mall. This comic was basically watching someone else play with action figures. The bad guys attack, and the good guys retaliate. It's stupefyingly simplistic, but hey, painted Atom in an important role. Yay. Continue the story through these character-specific posts:
Posted by Diabolu Frank at 3:49 AM 0 comments

2006 Atom: From Bruce Wayne's private files in the Batcomputer Pencil art by Doug Braithwaite painted over by Alex Ross from the back pages of Justice #6 (August, 2006.) Text by Jim Krueger writing as Batman:

PROFESSOR RAY PALMER is a genius, a physicist who stumbled upon the remains of a white dwarf star. Palmer used fragments of the star to further his experiments in matter reduction. His experiments failed time and time again, but necessity and his belief that he could not fail forever forced Palmer to experiment upon himself, with success.

Palmer graduated from college and married Jean Loring. He became the Atom and used his life as a hero to fight crime and establish his wife's career as one of the predominant criminal lawyers in the state. Palmer became a hero for love. It is this notion that separates him from so many of the other members of the League. But I wonder, what would happen if Loring were not a part of the equation? I cannot believe the cavalier basis on which he fights crime. We cannot have relationships.

Palmer is capable of reducing himself to tiny, even subatomic, size. He can ride electronic impulses through phone lines. Despite all his discoveries, and all he experience battling crime, he has yet to find anything at a subatomic level that suggests a propensity for crime.

Crime is a choice, a matter of will. Modern sociology is the crime of suggesting that it is not.

Besides getting the Tiny Titan's origin wrong (he shrank to save himself and some students trapped in a cave-in) and expanding an aspect of his motivation into the whole of it, the Dark Knight just started rambling nonsensically like Alfred had slipped him a mickey. A devil in the details of a criminal's molecular make-up? The hell, Caped Crusader? Either you're madly overrated or your present writer is dumb as a bag of hammers.

Posted by Diabolu Frank at 4:26 AM 0 comments