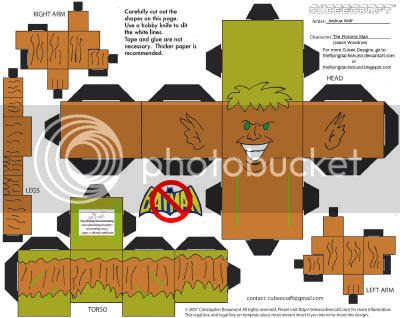 February is a female-character themed month on my Martian Manhunter blog, so I decided to feature the villainess Cay'an there in the form of a "Cubee," mostly because its one of the only pieces of fan art in existence to bother with such a lame, obscure character. Artist Joshua Wolf had tons of similar designs on his deviantART page, so I figured I'd use it as the basis for an easy blog crossover. The Aquaman/Mera familial foe Siren got in for the same reasons as Cay'an. Wonder Woman has more respectable female adversaries, so I chose a bad gal with higher regard, Circe. I had two other blogs to fill, and given that it's been well over a month since my last update here, I broke theme to choose Jason Woodrue to represent for POTA. The Atom has a rather paltry rogues gallery, and this was the only option, and we're honestly lucky anyone bothered to include the Floronic Man. The other guy breaking ranks is Eclipso, which is technically relevant here, since he was once a she, and she was named Jean Loring. It shows how f'ed up the DC Universe has gotten when the Atom can't really lay claim to his murderous, adulterous ex-wife after she finds a black diamond and becomes the Goddess of Vengeance. How cool could their spats have been? Why did she die by sharks instead a defining moment of cold-blooded assassination from the Mighty Mite? Moot now, of course, since we've got an all-newer chick Atom on the way in the New 52.
Posted by Diabolu Frank at 2:01 AM 0 comments