I hate that Ray Palmer is drawn shorter here than even Al Pratt, but at least the Atom showed up at all. From left to right, he's joined by Hawkman the Winged Avenger, Robin the Boy Wonder, Darknight Detective Batman, Captain "Shazam" Marvel, Pretty Bird Black Canary, the Scarlet Speedster Flash, and Green Lantern Hal Jordan.
Posted by Diabolu Frank at 3:30 AM 2 comments A.R.G.U.S.' Amanda Waller feared that the Justice League might turn from a lawful peacekeeping collective into superhuman fascists, and set about creating a government sponsored countermeasure. Through whatever means necessary, the heroes of the Justice League of America would loyally serve the interests of the U.S., and each member would be selected as an opposing force against a matching hero in the ungoverned League. Her first recruit was Hawkman, and she explained to field leader Colonel Steve Trevor "His clashes with the authorities have been escalating. That's good for us. Hawkman will accept our invitation under the pretense that the U.S. absolves his current record and grants him diplomatic immunity to continue carrying on his hunt however he likes." The cover story was "Katar Hol is a police officer from the planet Thanagar hunting alien fugitives and the humans working for them on Earth... There's one other thing. He prefers using maces and swords to ray guns and laser rifles. We have no idea why." All Waller was concerned about was that she had someone to check Aquaman.

Putting theory into practice, Hawkman ran down a human criminal accused of trafficking women and children. The Winged Wonder kept calling the perpetrator "Byth Rok," since that's the name Hawkman intended to use in the official arrest record to explain brutalizing the creep with his morningstar... 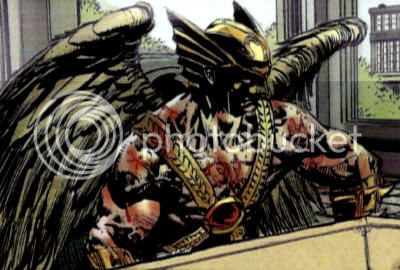 Meanwhile, the mysterious leader of a Secret Society of Super-Villains continued his recruiting efforts, which almost included a spy dubbed "Dark Hunter," who in the end barely escaped the Society's clutches into the custody of A.R.G.U.S. Oliver Queen had taken on the role at the request of Colonel Steve Trevor, but his injuries prevented Queen from telling what he knew. Trevor and Amanda Waller discussed the situation outside of Queen's surgical suite, with the Wall in a rush to pit her new League of America against the Society as a test of their mettle.

The savage Hawkman arrived at the new headquarters of the League in Washington D.C., ahead of a press conference where President Obama would officially announce the team. The young hero Vibe asked if he was okay.
"Why?"
"You're covered in blood."
"It's not my blood." 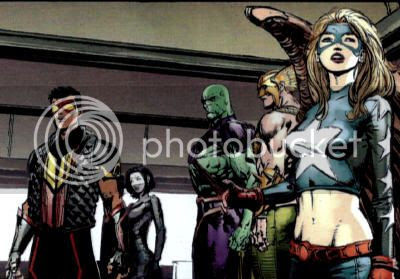 After a long beat, Vibe scooted his chair further away from Hawkman. Col. Trevor arrived and told Hawkman that he would need to get cleaned up. Sometime after meeting the press, the team climbed aboard a jet bound for the Kielder Forest in Northumberland, England, where Green Arrow had been found. "If the Secret Society is hiding in these woods, why don't we knock down some trees, make some noise and get their attention?" Trevor thought that unwise, since the League knew virtually nothing about what they were up against. Then Katana vanished, Catwoman disappeared, and something unseen flew past the group. A golden lasso caught Trevor around the neck like a noose. "Steve," said a figure who appeared to be Wonder Woman, "You shouldn't have come here." She was flanked by approximations of Superman and Batman...

"World's Most Dangerous, Chapters One-Two" was by Geoff Johns & David Finch. There was a Captain Atom reference in the second issue, when Vibe saw a chair in the meeting room with a "C" on it and thought he might be joining. Turned out the chair was meant for Catwoman, though. If they really wanted to take on the true Justice League, they'd have gone with Captain Atom. "i had mike norton who does both green arrow and atom do a great cover to the avengers 223 that had hawkeye and antman. " Since I've been torturing readers of my Martian Manhunter blog with my horrible old redesign attempts for months now, I decided it was about time that I inflict the same trauma across my other blogs. Above is a series of three teensy color tests for a Hawkman costume, as well as a head sketch doodle of Katar Hol, likely done around 1995. Yes, it's filler, but it beats a single post per week, right? Right? No?

Pooping on the DCU