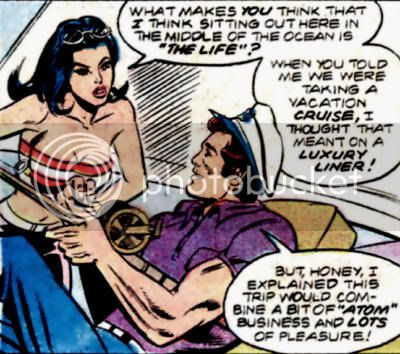 Ray Palmer had some vacation time coming, so he and wife Jean set sail for Curaçao. Not on a luxury liner, but a small sailboat... which would circle the same area for three days... because Ray hadn't mentioned that he'd volunteered to Green Lantern that he'd watch out for the anticipated return of Aquaman via teleportation from an alien world. Even though Ray explained beforehand that "this trip would combine a bit of 'Atom' business and lots of pleasure," Jean was understandably miffed. After all, Jean was the one in a tube top expecting exotic locales, while Ray seemed contentedly set on some Captain & Tennille roleplay.

A purple beam landing in the water signaled Ray to dive in fully clothed. Ray even commented on the salt water doing a number on his eyes and his powers being useless under the circumstances, as if none of this was foreseeable. When Ray finally found Aquaman, he was comatose dead weight. Ray came up with the idea of shrinking and growing rapidly and repeatedly to displace the water around Aquaman, pushing him to the surface. I'm not sure that's how physics work, but anyway, it got the Sea King to the surface in this comic book. You know, the surface where Aquaman dies after an hour, because breathing underwater is normal for him? Why not just check his pulse and let him float on, or use his JLA communicator to call in someone better geared to help than a lawyer and a physicist? Because the only other person sharing a rotating back-up feature in Action Comics was Air Wave, and who needs that?

Ray and Jean somehow got Aquaman on the boat, where he regained consciousness and started talking about vibrus-blasts and getting energized. Wait a minute-- wasn't Aquaman separated at this point? Was this that "pleasure" Ray was talking about? Sadly no, as the Atom made a joke about Aquaman suing the alien that had caused him injury, and Jean popped him with her finger. Perhaps recognizing that the '70s were indeed over, or having a nose for cold fish, Aquaman bailed overboard. Ray was left to have "fun, fun, fun" with Jean. Yeah, just keep telling yourself that, pal.

"Home ... Home on the Waves!" was by Bob Rozakis, Alex Saviuk and Frank Chiaramonte. This comic was a fine example of the inclusiveness of Bronze Age DC Comics. The whitest of people taking spontaneous South American vacations in their sailboats while their even whiter friend teams up with octopus aliens to fight spider aliens on a lark. No wonder you couldn't give these things away...

Posted by Diabolu Frank at 1:38 AM