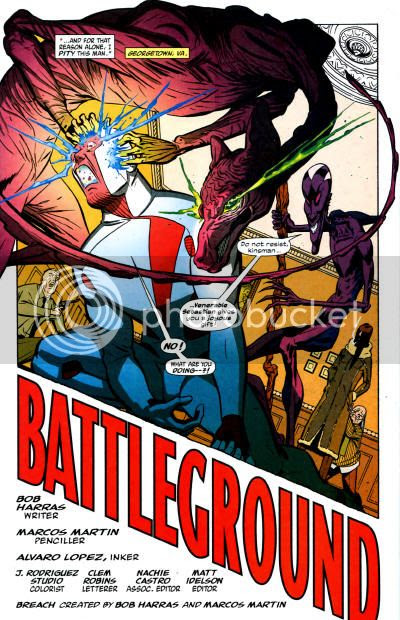 Talia al Ghul, leader of Kobra, looked over massive tubes containing her few surviving faithful volunteers in a H.I.V.E. experiment. Lex Luthor alerted her that the energy signature of the individual Kobra faced in South Africa had resurfaced in Washington, D.C. The adversaries traded unpleasantries before Lex asked, "Do I need to remind you that we need this man if our plan is to have any chance of success?" Talia agreed to spare one of her subjects, even though she was loathe to place such a committed believer in the hands of a scoundrel. "I serve at the pleasure of the mistress of Kobra. Long may her glory endure."

Major Timothy Zanetti was kneeling on the floor of General Mac McClellan's home office with the reptilian Rifter Sebastian's claws digging into his brain. The Herdsman felt Tim was receiving a "joyous gift." Tim remembered being abandoned at Project Otherside by Professor Ward. "I'm sorry, Major. This is the only way." The flesh tore away from Tim, until it was followed by the twisted wreckage of his body through the breach. Zanetti chose to reject the telepath, grabbing Sebastian by the wrists and freeing his mind. "I DON'T WANT TO REMEMBER!"

Sebastian was thrown out the window and crushed some preppie's daddy's Beemer on the street outside. The Herdsman remained impressed by the young kinsman, and thought he was perhaps too much for the old master Sebastian, "still too new to this world." The Herdsman felt the venerable one must always be protected, and asked Father John to loose the offspring. 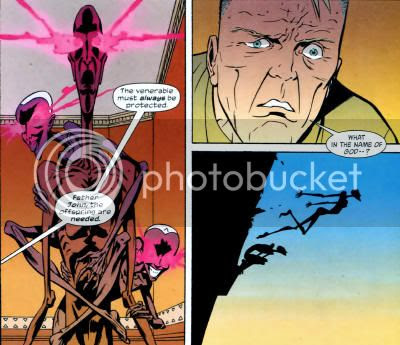 Mac yelled at the cigarette smoking woman "You've been working for the Rifters all these years? You made some sort of deal with them, didn't you? My God-- we trusted you! I sacrificed my best friend because of you!" She asked to be spared the melodramatics, and backhanded the General across the room. The Herdsman wanted to use the General for his own purposes, but was denied by the woman as an old friend who still had more to contribute as is. The so-called "Tobias Underwood" was afraid and wanted to go home, but the woman told Ward that this experience would serve as research for his book.

Major Zanetti continued to dominate Sebastian, so the Herdsman approached to set the former Meyers children against his young kinsman. Tim couldn't bring himself to fight back against the pair, who battered and slashed him. The older sister found the assault on the elder Sebastian an abomination. "Have we not suffered enough than to see our ways desecrated?" The younger brother wanted to impress the Herdsman, and elbowed his sister violently for his own turn at Zanetti. The sister thought it an easy victory, with Tim deluded that they were still "the weak things," and turned her attention toward innocent bystanders. "Ah! This is a pretty thing." With a touch, one woman's arm melted horrifically. Tim drew both offspring's attention back on himself, taking punishing injury without dealing any, "Because... you're children... And I don't hurt children..."

At Project Otherside in Nevada, Captain Yoshiba found Dr. Campbell Chambers unconscious on the floor of Zanetti's cell. Her husband Paul rushed to check on her, while Yoshiba immediately suspected her complicity. Before interrogation could commence, an alert about the battle in Washington sent the team scrambling. 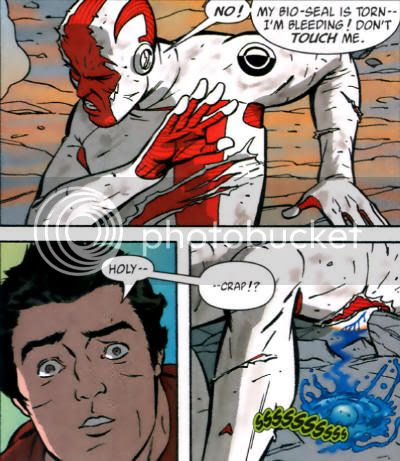 Tate was at a "Starbud's" near the battle, and ran out to investigate. Tim recognized the young man from Africa, both found a second meeting crazy, and Tim warned Tate to keep back. His bio-seal was torn, and Tim bled a blue acidic plasma. Tate gave Tim a pep talk about believing Tim to be "one of the good guys," and his need to put his concerns about the transformed children aside, since his death would lead to many more at their hands. "I know. God help me."

The cigarette smoking woman continued verbally fencing with Mac, until she realized Kobra had "taken the bait" in joining the fight late. "Rifters believe fervently in tests, General. Those of the body and of the soul. And many, like this one, simply lead to the next." She had Father John summon the offspring with a high pitched call. The Herdsman wanted to see to Sebastian's wish for the young kinsman's death, but she felt the seeds planted today needed time to bear fruit. Everyone entered a wormhole, including Tobias Underwood, who wondered for whom the continued existence of Tim Zanetti meant a "happy ending" to his book.

Mac rushed to see if Tate was okay. "He's your son, Mac? Geez-- a guy goes into stasis for a couple of decades and look what happens. He's a good kid, Mac-- you oughta be proud." Just then, a H.I.V.E. airship landed, and a towering purple reptilian man-beast with fangs and claws emerged.

"Battleground" was by Bob Harras, Marcos Martin and Alvaro Lopez. Progress continues by centimeters rather than inches, much less feet. The book looks great and reads well, but the last thing needed was a tenuous "Villains United Tie-In" and another of the increasingly tedious Rifter "test and retreat" maneuvers.