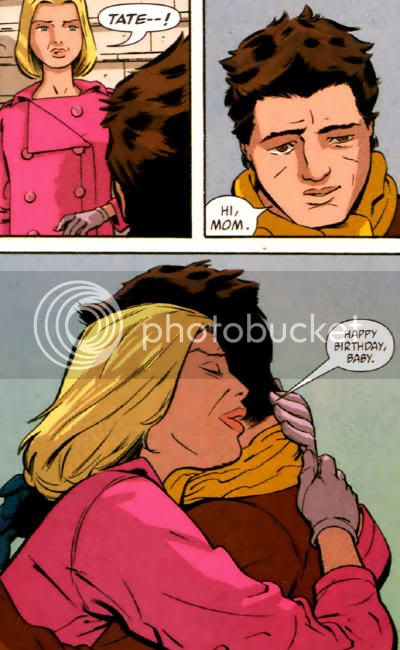 Tate turned up in Washington, D.C. to meet his mother, Senator McClellan, who was fielding reporters' questions about illegal high-technology weapons trading. They embraced, and although Tate was still out of it, planned his birthday celebration. Of course, ever since his father died, April 17th had been a weird date for the pair.

Major Timothy Zanetti was encased in a small levitating cube, and not talking to anyone. That date, April 17th, seemed to set him off again. Dr. Campbell Chambers thought the use of his powers was having "a direct psychological and physiological impact" on his well being. Captain Yoshiba, a smirk dragged along the pock-marked right side of his face, was flippant to the point of rudeness about the Major. It didn't help that the Captain had sent a recon team to where Tim had sensed the Herdsman. "Do you want to get them killed!?" Punching a crack in his tiny prison, Zanetti had to be gassed.

The investigative unit, including Dr. Paul Chambers, arrived at the house of the family from last issue. Damage on the scene was consistent with a breech event. From the ceiling, a fleshy blob of abstract insectoid and humanoid parts nearly fell on top of the troop. Shots were fired into the abomination, which still had a face off to one side. As "she" died, it said "help... me... they took my famileee-- my childr--" General McClellan called the wife to say that he'd be late for the birthday party, then met with the revived Tim Zanetti.

Tate couldn't stop thinking about the night his father died, and asked his mom if she'd ever imagined their life had he lived. She was just grateful for her son's safety, and for the help her current husband had provided to her investigation of Kobra, which she feared prompted Tate's near murder. Tate was curious about the super-powered prisoner he'd briefly met, and his mom promised to look into it. "Mac should be able to open some doors. It pays to have a Joint Chief of Staff in the family..."

Tim burst his cage with excitement at seeing his old buddy Mac, but proximity alerts warned him not to make physical contact. "Wow. Mac, you got old." McClellan explained how badly Zanetti was needed in the "very dangerous, insidious war" to come. Mac discussed Tim's status as sole survivor of Project: Otherside. "The accident opened the door to a race we call 'Rifters.' They're extremely dangerous, incredibly hostile creatures. Due to your physiological changes, you apparently can sense them-- which makes you a vital tool in this war." To insure that tool remained in his shed, Mac told Tim that Helen and Tate had died in the project's catastrophic wake. Tim blew up, and had to be restrained again. Tobias Underwood was ecstatic over how gloriously his novel was turning out-- "my best work ever!" The cigarette smoking woman congratulated him, and asked if some friends of hers could stay at his place for a while. They included the Herdsman, and a small family of like creatures...

Mac returned home late, to a saved piece of cake and a note from Helen.

Tim had calmed down again, as he spoke with Campbell about not really remembering his son anymore, "as if that part of my memory was wiped clean." Zanetti never could remember the significance of the date, and seemed less concerned about Helen, as well. Campbell reached out to Tim, but a proximity alarm sounded, as both Tim's and her containment suits were compromised. "Tsk, tsk Doc-- forgot your helmet. It's the little things that get you... isn't it?"

"Lies" was by Bob Harras, Marcos Martin and Alvaro Lopez. This would have been a solid first issue in a theoretical second trade paperback collection, or a good jumping on point for new readers after a crossover. No trades ever existed, and a fifth issue would have landed in a first collection, and the tie-ins start next issue, so this story was instead a spinner of wheels wasting precious time. After all, we're about halfway through its truncated run...