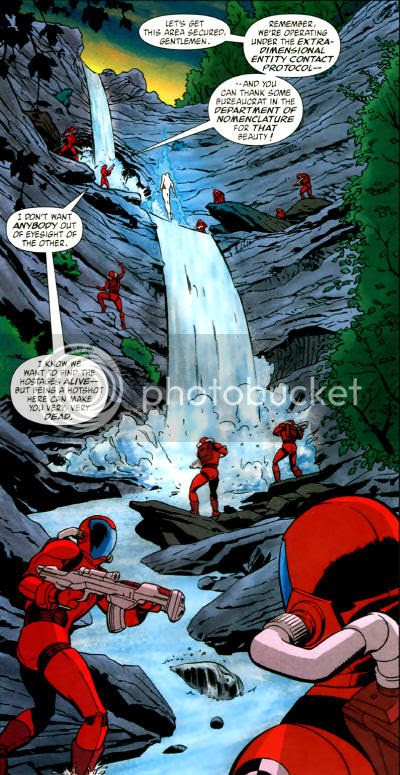 Tobias Underwood excitedly worked on his book, the culmination of all his years working with the cigarette smoking woman. "And having met your-- your-- friends-- makes finishing the book even more paramount. If only... so many people didn't have to die."

"Operating under the Extra-Dimensional Entity Contact Protocol," Captain Yoshiba had a suited up strike force inspecting a waterfall at the urging of Major Timothy Zanetti. Tim levitated in a fugue state, until his serotonin production spiked and he saw a vision projected by the Herdsman of the entire patrol massacred in a most brutal fashion. Captain Yoshiba was already irritated enough with Tim to ask Dr. Campbell Chambers "Isn't there some pill we can give him to handle these mood swings?" He was outright furious when Zanetti lied about being mistaken with regard to his claim of having sensed breach entities in the area. The troop bugged out back to base, while the Herdsman looked on from his hidey-hole. "Ahh! He heard my thought-call. And saw my thoughts with clarity and precision. Truly, he is a most mighty kinsman. Soon, the next test begins... and if he survives, oh, what a wondrous thing that will be! Do you not agree, brother Sebastion?" A hiss was the only reply.

Captain Yoshiba was still seething back at base, calling into question Zanetti's credibility, usefulness, and sanity. Dr. Campbell Chambers had questions of her own, which kept her up in bed past three in the morning. While her husband Paul slept, Campbell dressed and paid Zanetti a visit. "The Herdsman was there. At the falls... wasn't he?" Tim confessed to his vision of the massacre. "I saw that-- in my head-- in glorious living color. He made me see it. It doesn't leave much hope for the Meyers Family... not that there was much to begin with, I guess." Campbell thought the JLA should have listened to Tim. 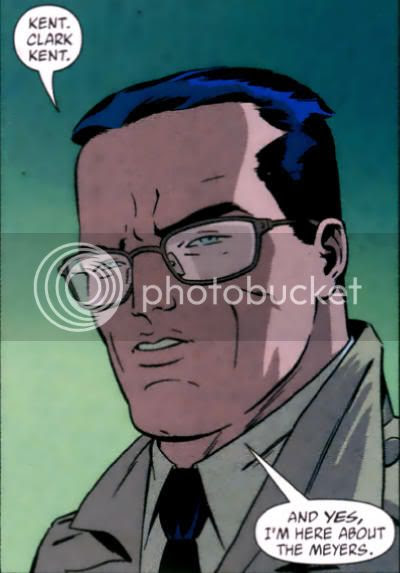 At the Meyers home, reporter Clark Kent got information out of a loose lipped plainclothes officer watching over the active crime scene. Kent scanned the area with X-Ray Vision, and connected this tragedy with Zanetti's words of warning during their scuffle in South Africa. "Yeah. I think this is a very big story."

Tim continued to discuss his vision with Campbell. "What I saw and felt was-- horrific. He's-- it's got a hatred and joy in killing that was overwhelming... Funny, in a way I'm glad. Now I know clearly what I'm up against. No more vague feelings or intuitions." No one else could stop the Herdsman, and Tim couldn't try to do it without setting off every alarm in the complex. "That's where you come in, Doctor."

At the McClellan home, Helen asked Mac about the metahuman who saved Tate's life. She wanted to thank him personally, and hoped her husband could arrange it. Helen saw the fatigue that had plagued Mac for weeks, but he fobbed it off on congress scrutinizing military expenditures. "I swear, sometimes they make the military feel like the enemy." Mac promised to see what he could do. Once Helen was off, he pulled a revolver out of his desk drawer. The cigarette smoking woman asked, "Now, now, General-- is that any way to greet an old friend?" 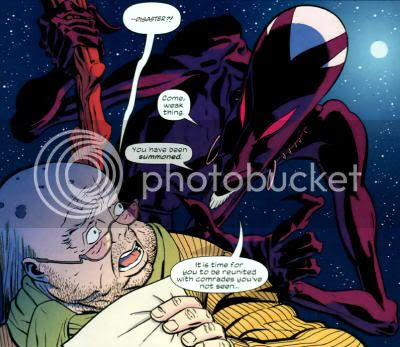 Tobias Underwood relaxed at his secluded home, looking over his printed work. The Herdsman snuck up on him. "Come, weak thing. You have been summoned. It is time for you to be reunited with comrades you've not seen... in a very long time."

Dr. Chambers set the sensors on an internal diagnostic cycle to give Tim a thirty second head start, then he knocked her out to make it look like an escape. "I'm trying to hold onto my memories... as long as I can... but I'm a soldier with a job to do. Even if I'm technically disobeying orders." Tim opened a wormhole to the Herdsman...

Mac asked the cigarette smoking woman why she had involved his stepson with Zanetti, and she replied that it was a test of Tim's metamorphic memory loss. She offered Mac a cigarette, and he refused, having quit years earlier. "How current of you! I hold on to my old habits, even the unhealthy ones. I find the consistency somewhat soothing." She explained that humanity was about to be snuffed out like a bad habit. "The bargain is broken, General. The Rifters will have their revenge. The war has begun." Mac threatened her again, with his gun and his world's ability to defend itself. She retorted that Mac never had much faith in the "Zanetti option," which was well considered. Events had progressed rapidly since Tim's awakening. "When your friend was offered up in the name of global survival-- you handed the Rifters their greatest opportunity. His destiny is theirs, General. Their beacon of hope. Their ultimate weapon of vengeance. They want you to know that." 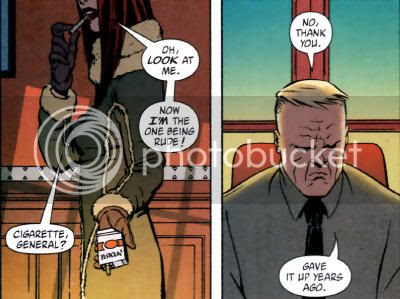 Tim's self-perception was that of a Picasso painting as he fell through a formless white void into the home office of General Mac McClellan. Also present was Professor Ward from Project Otherside, though Tobias Underwood claimed no knowledge of his former identity. The Herdsman had brought Tim to meet more of his kin, including Sebastian, who ripped through Zanetti's head with his claws.

"Threads" was by Bob Harras, Marcos Martin and Alvaro Lopez. This issue is probably where the series should have been a couple or three issues back. Sales figures must have come in, and the verdict seemed to be that a mini-series pacing would better reflect the book's longevity. A lot of disparate players and plotlines were suddenly and somewhat arbitrarily coming together, although still welcome after the creeping in the first half of the run.