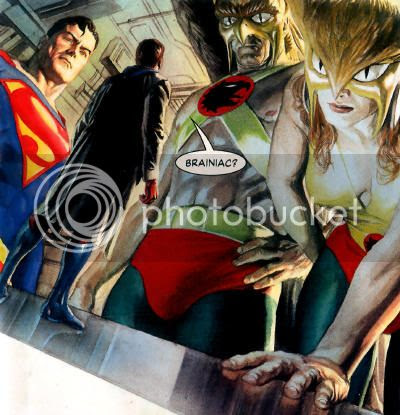 The Atom had been studying the artificial worms found by his present friends Hawkman and Hawkgirl at the Fortress of Solitude. When Superman reported the involvement of Brainiac, it cinched the deduction the little buggers were alien in design. Millions of the critters had been inside the Man of Steel, controlled in tandem by a single extant intelligence. "That mind would need to be amplified well beyond even the specifications on Brainiac in the League's files. These machines seem to have limited capabilities for independent operation as well. They really are genius in their simplicity.

Green Lantern Hal Jordan finally made his way to the Fortress of Solitude, as a relieved Atom standing on Captain Marvel's shoulder offered, "I can't believe it. We all survived."

Red Tornado was in a sort of monitor womb, and announced that everybody's supporting cast had been kidnapped, including Jean Loring and Reddy's gals Kathy and Traya...

Continue the story through these character-specific posts:
"Chapter Eight" was plotted and painted by Alex Ross. The script was provided by Jim Krueger, and the penciled layouts by Doug Braithwaite.
Posted by Diabolu Frank at 12:20 AM