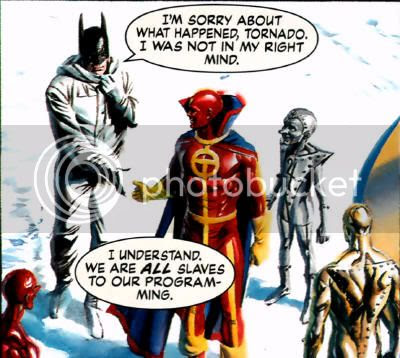 Doc Magnus, having rebuilt Red Tornado, contacted Wonder Woman in her invisible jet with the android's report. Batman had betrayed the League, causing Tornado's dismantling and the destruction of the Justice League satellite.

As Hawkman ruthlessly smashed Brainiac bodies, Hawkgirl agreed with the Martian Manhunter that a conspiracy was afoot. Katar dropped a bomb down a Brainiac's throat, then hauled his wife through an exit before it exploded. "Next time, tell me. It's not a plan I can be a part of if I don't know what you're doing." Dismissing his partner, Hawkman caught one of the many worms raining down with the debris.

Red Tornado was joined by the Metal Men at the rendezvous point outside Superman's fortress of solitude. Batman greeted him with an extended hand and an apology. "I understand. We are all slaves to our programming." The Atom was presumably present or en route...

Continue the story through these character-specific posts:
"Chapter Seven" was plotted and painted by Alex Ross. The script was provided by Jim Krueger, and the penciled layouts by Doug Braithwaite.
Posted by Diabolu Frank at 1:45 AM