How do I define injustice?

The Atom was created in the Golden Age, reinvented in the Silver Age, was a featured player on two major super teams, all besides starring in two multi-year solo series and a string of mini-series. There was no Al Pratt trading card in this set, and Ray Palmer didn't get a new card of his own-- only a a reprint of the cover of his first appearance.

Peacemaker, star of a four issue direct market mini-series and featured player in several failed books, received a card by one of the few "hot" DC artists of the time. Sure Bart Sears' perspective was jacked up and his musculature typically obscene, but it still looked contemporary and spiff.

Then again, has Peacemaker ever appeared on any kind of trading or gaming card since? Hell, merchandising of any kind? You realize Jemm, Son of Saturn has an action figure? Karma is a harsh mistress, you magnificent bastard.

There's a lesson to be learned here. The first is that the Atom was probably still thought dead at this time, which is still no excuse to exclude him. The second is that characters who debut in titles that accept colloquial contractions don't get a second chance to make a first impression. 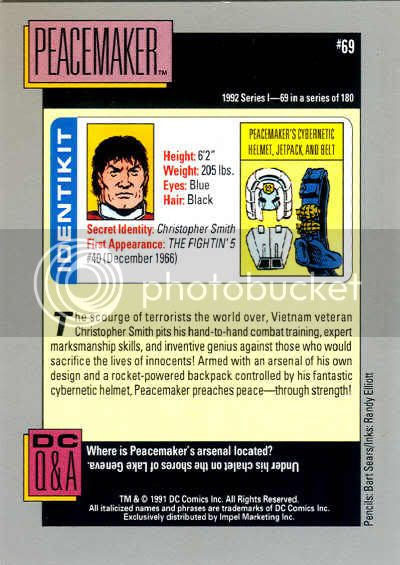 Posted by Diabolu Frank at 9:31 PM

Fun write-up. I love this trading card set. I collected nearly all of the various DC sets through the 90s.

What did you think of Peacemaker in the Jamie Reyes Blue Beetle series? That was probably my favorite version of him.

I only read one of the Jaime trades (the second?) It didn't make enough of an impression for me to even remember what the story(ies) were. Peacemaker was your typical grizzled veteran mentor, right?

I enjoyed the Jamie Reyes Blue Beetle. It started slow, but eventually picked up. Don't recall around what issue, but by the time Sturges came on board, I was totally into it.

You're correct, Peacemaker was a grizzled veteran mentor. Not having a ton of exposure to him, I liked him in this role.

If you visit Mighty MLJ vs. Charlton, you can see bunches of vintage Peacemaker page scans from the '60s. They're a trip. He really was essentially The Comedian.