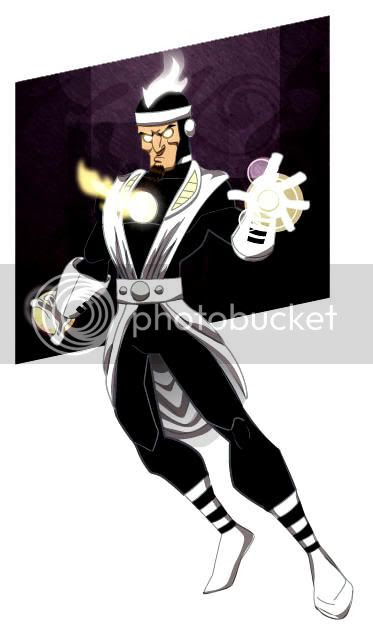 Deviant Artist alexmax has done a series of themed DC Universe group shots that I quite like, and even created an all-encompassing wallpaper that pays homage to the underrated Marvel Universe Series III card set. Of "DCUniverse Vol.7: The Injustice Gang" he said:

More Villains. This time, it's the Injustice Gang. I wanted to make a lineup with, what I feel are, the most iconic arch-enemies for each of these guys. Inspired in large part by what Grant Morrison did during the Rock of Ages storyline...

Alessandro included Dr. Light as a substitute parallel for Green Lantern Kyle Rayner, which I felt was a stretch. A case could be made for pitting him against Martian Manhunter as well. However, Ray Palmer was to my knowledge the first hero to fight the Justice League of America villain solo, and pitting two micro-specialized scientists against one another feels natural.

For more spotlights from this mural, see the following:

I kind of miss Dr. Light. I have no idea what's going on in the Atom backup, so I don't know who he's fighting, but I'm guessing it isn't Dr. Light.

Any chance of you doing an Atom Vile Menagerie?

I want to, but impossible as it seems, I think the Atom's rogues gallery is far worse than J'Onn's. It would take a lot of research time I won't have for at least a year.