The Atom in "Decisions, Decisions!" 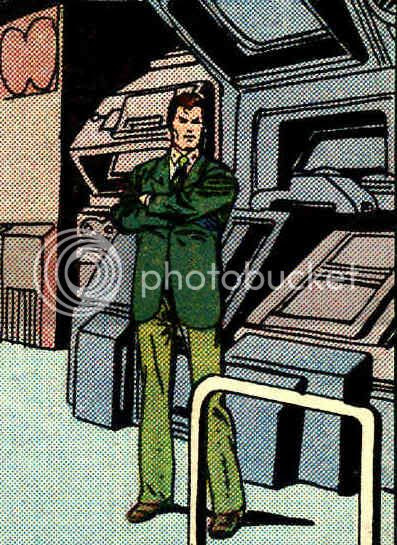 The year is 1960. Physicist Ray Palmer has come to regret taking on development work for Heywood Defense Industries. Palmer had been working from the plans of a scientist out of Gotham City named Hugo to create a device to control the minds of synthetic troops Heywood had developed. Hugo had taken seemingly mad leaps in logic with his designs, which was part of why Heywood had dismissed him, and now put pressure on Palmer to make up for the lost time. As Palmer toiled in his Detroit lab, the building was surrounded by F.B.I. agents and uniformed police officers, demanding anyone inside surrender themselves. Though Palmer had questioned the ethics of his assignment, he was supposed to be working on a government authorized project, and had no desire to find himself in jail because someone had misled him. While Palmer debated his impulses to run, hide, fight or negotiate, a phone call came through to his office. Startled, Palmer bumped his head on a counter before answering. It was Heywood, demanding Palmer release the synthetic troops to fight off the authorities. Heywood seemed a bit mad himself, and Ray wasn't the kind of man inclined to let himself get fooled twice.

What should Ray Palmer do?

Surrender himself to authorities?
Release the synthetic men?
Posted by Diabolu Frank at 9:57 PM