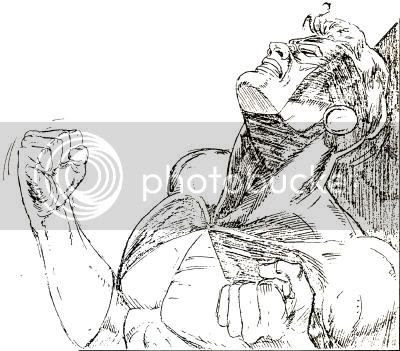 I'd feel bad about the gaps between posts here, but I'm my own only follower right now, so I figure I'm sharing the construction of an actually blog with nobody. It ain't built yet, so nobody's came. Anyway, inspired by the Amazing Heroes #162 article "The Tiny Titan Returns... Again," I gave a history of Ray Palmer from the 1960s-80s. Since I'm not quite ready to properly relaunch this blog, and I wanted to get a full history to date up, hypothetical ya'all's gotta wait.

Ray Palmer's second ongoing series, Power of the Atom got canceled at #18 in 1989, and our little guy had no place to go. An Atom named Adam Cray had been enlisted to help Palmer bust the Micro-Squad, and joined the Suicide Squad, where he died. Ray got a one-shot special, and flirted with rejoining the Justice League, but even with Superman on board that team was still a mess. Dan Jurgens had taken over the League and was still trying to write them halfway funny, and failing that, brought the Atom and other Satellite era members back for a grim & gritty revival. Jurgens left the book to do the big event mini-series Zero Hour in 1995. There he de-aged Ray into a teenager, made him wear a stupid Marty McFly-cut leather vest, and had him lead the least popular incarnation of the Teen Titans ever. They got canned after two years in 1998, though somewhere along the line, the teen Atom got himself another special (1995.)

Aside from guest appearances, Ray's life was lived through reprints of his old adventures for years. The Atom did get to become a grown-up again, and through sporadic JLA appearances, showed a new generation of readers how bad ass he could be. He even sorta kinda rejoined for a bit. Then Identity Crisis happened in 2004, where just as Ray had begun cozying back up with his ex-wife Jean Loring, he learned she'd "accidentally" murdered their mutual friend Sue Dibny in order to facilitate their reunion. Jean got tossed into Arkham Asylum, while Ray pulled his usual avoidance act, and found himself a nostalgic world in the Multiverse far from the modern DC Universe to live on. While Ray was away, Jean Loring got possessed by the god of vengeance Eclipso, and wrecked all kinds of havoc before getting un-possessed and eaten by sharks.

As usual, some super-heroes had to ruin Ray's vacation, tracking the Atom down and dragging him into the quagmire of the Countdown and Final Crisis events. By that time, a fella named Ryan Choi had become the All-New Atom, and Ray seemed cool with that. Yet, Ray Palmer has since raised his profile in modern comics by joining a new Justice League team led by Green Lantern Hal Jordan, and mixing it up with zombie Black Lanterns, including Jean Loring, as part of the very popular mini-series Blackest Night.

That brings us up to date, so I finally feel like I can get this blog moving, since I can jump around in this timeline however I please. Look for more frequent posting now, and also shorter, for God's sake!
Posted by Diabolu Frank at 3:08 PM