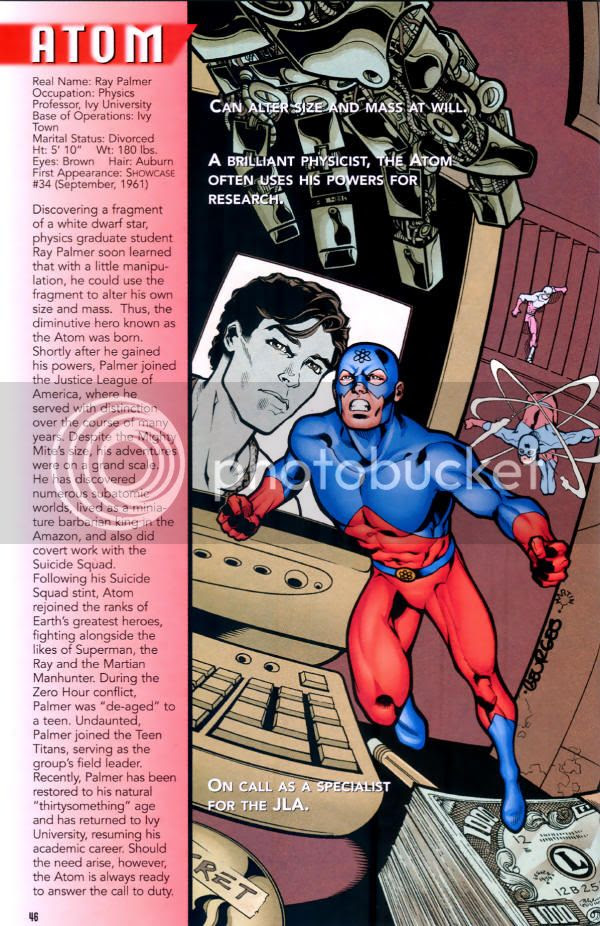 I bought most of the SF&O books as they came out as a matter of course. Since Zero Hour, I'd made a deep investment in the Post-Crisis history of the DC Universe. It isn't like I didn't care about continuity before, but DC made a real effort to solidify it in a quantifiable way that turned on the history buff inside of me. A major part of that were the Timelines that ran in most volumes, breaking down who was where by a fluidly subjective but still relevant chronology. Let us examine...

1464:
Chronos meets Jason Sangue (Blood) in Florence, Italy. During an altercation in that same era, Chronos gains his time-travel powers.

1641:
Captain Fear rescues the drowning Chronos from the waters off the Florida Keys.

1789:
Chronos is present for a "resurrection" of Ra's al Ghul in the African desert.

1873:
A time-stranded Chronos is taken in by the Clark family of Smallville, Kansas; while there, he meets a band of time-traveling gypsies.

1943:
Chronos gets caught between Allied and Axis forces on an island filled with dinosaurs.

2113:
Chronos aids in the capture of Hayden Glass, a shape-changing serial killer whose trademark is JLA-themed murders.

22nd Century:
Chronos and his nemesis Vyronis narrowly avoid capture by the lion men of the wastelands.

853rd Century:
Chronos travels to the future, only to meet himself

Now you may be asking yourself why I spent all that time listing time traveled by the Atom foe Chronos. The answer is, I didn't list a single appearance by the nefarious David Langhorn Clinton. They're all about this guy... 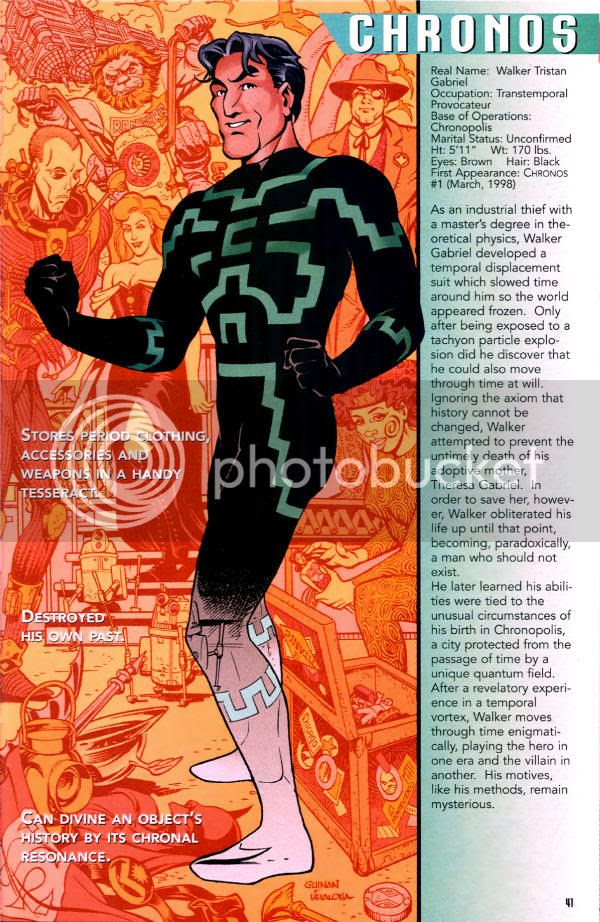 This guy starred in twelve issues of his own comic, which was cancelled the same month DCU Heroes Secret Files & Origins #1 was released. In his entire existence, Walker Gabriel appeared in less than twenty comic books, but received twelve bullet points for his adventures. Meanwhile, the Ray Palmer Atom was one of the few (relatively) iconic DC heroes whose continuity was untouched by Crisis on Infinite Earths and only lightly scuffed by Zero Hour. Almost fifty years of unbroken continuity, and let's face it, Ray also spent an awful lot of his solo series deep in the past, thanks to Professor Hyatt's Time pool. Let's see Ray's timeline...

35 Years Ago:
Ray Palmer is born in Ivy Town.

9 Years Ago:
Discovering a fragment of a white dwarf star, Ray Palmer becomes the Atom. He later joins the JLA.

The Atom and Hawkmam form a lasting friendship, often working together to fight crime.

5 Years Ago:
Atom marooned in Amazon jungle, where he joins a society of miniaturized natives.

3 Years Ago:
His Amazon village destroyed by the CIA, the Atom returns to America.

Suicide Squad re-forms under Amanda Waller-- members will later include Nightshade and the Atom.

Ray Palmer fakes his own death to uncover government operatives trying to kill him. He gives his size-reducing belt and "Atom" identity to Adam Cray.

The Atom temporarily returns to the JLA, helping the team defeat Dr. Destiny and free the Martian Manhunter from the Bloodgem.

1 Year Ago:
The Atom helps Superman put down an uprising in the bottle city of Kandor

Ray Palmer's normal age and powers are restored. He returns to Ivy University.

Ray Palmer has appeared in over a thousand comic books, with better than seventy-five bearing his name in the title, and he got two more bullet points than the Walker Gabriel Chronos. Little things like his Golden Age predecessor, his entire supporting cast/rogues gallery (including the original Chronos) and his marriage/divorce don't rate mention, but I'm so glad to know when that crossover that re-integrated Supermans Red & Blue took place. The Atom's history as presented here is as a footnote in other titles, most published Post-Crisis. Years ago, I tried to create a cross-referenced database of all these timelines, but the folly was staring me right in the face. A DC Comics so enamored with an insignificant moment in their history as the 1998 Chronos series could and would inevitably drop another hard reboot that rendered virtually everything I just typed entirely moot. That deep investment I talked about earlier? Gone. Never to return. But hey, here are some nice pin-ups; The Atom's written by Matt Brady with art by Georges Jeanty and Jason Martin, while Chronos's was written by John Francis Moore with art by Paul Guinan & Steve Leialoha.