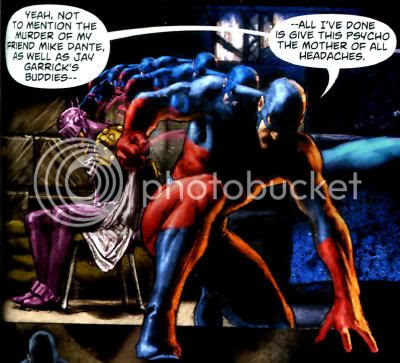 Ira Quimby was wrapping up a project for Prometheus, while the captive Gorilla City scientist Malavar looked on. Malavar was the reason Congorilla’s tribe had been massacred, though his immediate use was not clear. Prometheus took I.Q. aside to celebrate their success and retell his origins, including the new wrinkle where all of his lamer appearances were the work of an imposter while he recovered from his takedown by Batman in the last Morrison JLA arc. Prometheus had murdered his double brutally and was in the process of rebuilding his reputation through a fate worse than the deaths they so routinely were resurrected from. In the meantime though, Prometheus had killed a bunch of Global Guardians, specifically skinning Tasmanian Devil to create a fur rug. This impressed no one, including I.Q., who had just inadvertently drank an adult beverage laced with chemicals that regressed his mind to that of an infant.

Despite a ban against any Kryptonians on Earth, Supergirl was secretly on planet to search for her father’s killer… and justice! While a bit crybaby hypersensitive, the Maid of Might was still up for Captain Marvel as a side dish, with reciprocity.

While flying over the ocean in an old Blackhawk Squadron fighter plane, Starman and Congorilla were attacked by mechs. The pair won the battle, but lost the plane, and Bill had to swim the rest of the way to land.

Prometheus was captured in the Gotham City raid, so the Atom tortured him for information. Green Arrow began to protest, but was outvoted by Hal and Ray. “-- all I’ve done is give this psycho the mother of all headaches. The pain we feel can’t be fixed with aspirin.” Prometheus, in the third person, explained that his scheme was establishing him as the “Batman” of villains, feared by all as he led factions of the underworld. Ray and Hal were getting pissed with the emphasis on self-aggrandizing delusions and the poverty of hard facts, until the face of “Prometheus” started melting off. This was actually one of the many Clayfaces, and then a bomb implanted within him went off…

In Opal City, the Shade began putting together his own squad… for justice! A fortune was read that indicated a great deal of additional heroes would become entangled in Prometheus’ plot, including Wildcat, Miss Martian, Manhunter (Kate Spencer,) the Guardian, Batwoman, Shining Knight, Hourman, Liberty Belle, Robotman, and others.

The third chapter of Cry For Justice, “The Villain” was by James Robinson and Mauro Cascioli. Credit for consistency, the book looks very nice, and the script is fun, but everyone is taking their time getting anywhere. The team formation was also less than organic, as they each cried… for… justice! My only major complaint, corrected for this synopsis, was a lengthy flashback for the real Prometheus before the explosion. It might have worked as a floppy, but in a trade it was an irritating diversion.