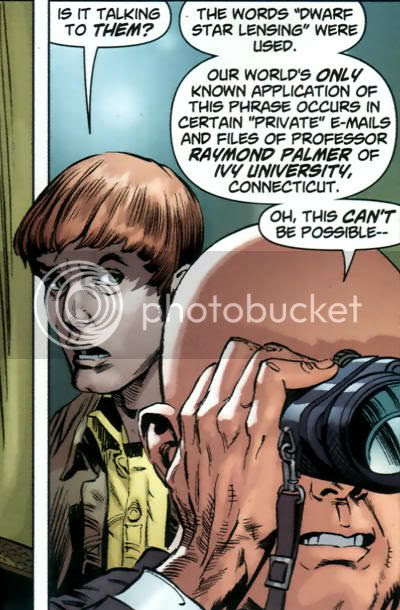 The island of New Troy, "the heart of Metropolis," suddenly vanished from the Earth. Superman and Steel were on the case, as surrounding areas of the city physically fell apart from the absence. New Troy had been taken by Brainiac and bottled up on the evil alien computer's spaceship. The citizens trapped within fought off insect-like robots sent in by Brainiac, and pondered their fate. Lex Luthor surmised, "Teleportion technology, advanced cybernetics. The Hob's River Bridge has been severed by a wall of glass. They've abducted seven million people simultaneously... The words 'dwarf star lensing' were used. Our world's only known application of this phrase occurs in certain 'private' e-mails and files of Professor Raymond Palmer of Ivy University, Connecticut. Oh, this can't be possible-- We've been miniaturized..."

"Doomsday Decision" was by Grant Morrison, Rags Morales and Rick Bryant. You can read more about it here.