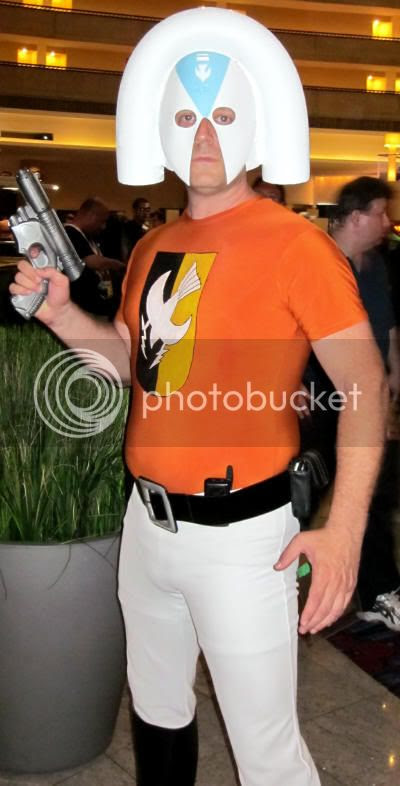 When it comes to the Charlton Action Heroes, I figure in for a penny, in for a pound. Captain Atom is a co-star on this blog, so why not keep the door open for any of his chums I might like to cover. Besides, I've sucked at posting this week, so something's got to be better than nothing.

Peacemaker is another character that DC completely warped in the translation from Charlton. He's the kind of character, like the Punisher or Captain America, that you can't write if you don't buy into their bullstuff. You just have to accept that Christopher Smith loves peace so much that he is willing to fight for it. Sure, by "peace" he probably means atomic age white upper-middle class protestant American values should reign over the earth, and by "willing to fight" he means he'll roast anyone who opposes him alive in napalm while smirking. Regardless, at least while writing him, you have to believe in the legitimacy of that far right wing world view, or just leave the character alone. Making him a headcase who takes orders from the ghost of his Nazi father or tatting him up and pretending he's just an ornery tough guy from just off Yancy Street ruins the very basic appeal of the character. Sure, Peacemaker can be as horrifying as any super-villain, and he was the basis for the Comedian after all, but that's the point. Peacemaker is John Wayne filming The Green Berets during Vietnam, not Sean Penn filming Casualties of War after Vietnam. Peacemaker is the Pat Tillman quitting a pro football career to serve in Afghanistan, not finding out Tillman was killed by friendly fire. Peacemaker is the American aggressive interventionist myth, not the liberal condemnation of it. At his best, he's a hopelessly square peg with a big plastic covering around it forcing its way through a round hole until the whole damned thing shatters because damn it, what do you need besides that badass square peg, anyway?

Here's a guy in an original Peacemaker costume. I always dug this suit, and the only commercially liable part is that friggin' bucket on his head, but that's part of the square peg thing. My favorite interpretation is when it's a transparent dome over a face shield, but every artist offers their own take. I like this, but I find it amusing that the cosplayer looks like he's about to cry. He must be heartbroken that he's forced to take a break from brutally killing America's enemies for this convention appearance.

Once again, this pic is from Shag Matthews of Once Upon A Geek, who offered up oodles of photographs and related his Dragon*Con 2010 Weekend of Insanity a few weeks back. Thanks again!

More Cosplay of the Day:

Take off the helmet, dye the shirt black, stick on a horsehead instead of the bird, and you've got Maxwell Lord. There's something to be said for simplicity.

I couldn't believe it when I stumbled upon this costume! So unique for cosplayers!