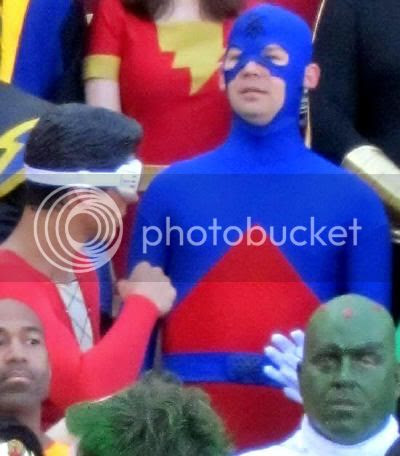 According to the website, "Dragon*Con is the largest multi-media, popular culture convention focusing on science fiction and fantasy, gaming, comics, literature, art, music, and film in the universe!" Even under such a specific set of criteria, I find the claim dubious, but the SDCC of Atlanta, GA seems to be the geek event of the American South. Besides, I'm in Houston, a town with a checked convention history. The '90s were full of bogus little ballroom shows that could barely fill a Marriot side room, so I can't cast stones. Plus, The Irredeemable Shag and Girls Gone Geek seem to have had a blast there this year. 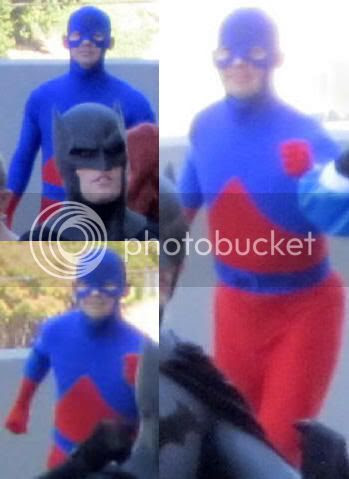 Speaking of Shag Matthews, the good man was kind enough to supply a bunch of us her bloggers with access to the treasure trove of his DragonCon 2010 Photos, featuring tons of minty fresh costumed players from the September 3–6 event. In the spirit of Damian Maffei, I've played Where's Waldo?, locating the one guy decked out as the Silver Age Atom waaay back in massive group shots. This was Crisis of Infinite Cosplay folks, as the scale of these get-togethers just keeps growing. Clustered on a rooftop, it's like a Romero zombie epidemic, but bite victims sprout crotch-suffocating lycra instead of developing a lust for brains. Point being, our Tiny Titan was appropriately difficult to find and photograph, so don't blame Shag for the fuzzy images. The Mighty Mite was just that obscure, unlike the outstanding attention hog Plastic Man seen to Ray's left above. That guy was upfront and animated in so many pictures, it makes me glad I don't run a Plas blog, because sifting through all the terrific options would have been murder. Two-edged sword, that. For perspective, check out the original group shots 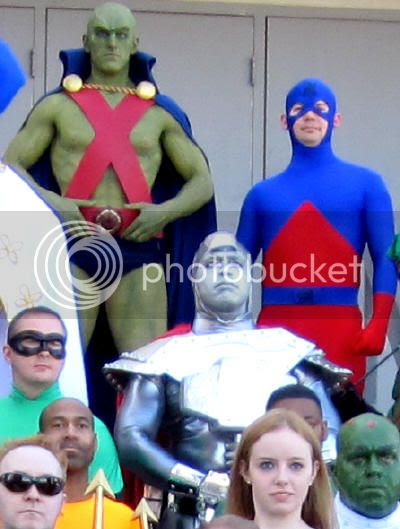 Above is a final shot from one of my favorite photos from Shag's set, featuring two of my bestest super-pals J'Onn J'Onzz and Ray Palmer, along with good buddy John Henry Irons and even a hint of BLAquaman. Race knows no bounds in cosplay (as we'll see later in the week,) but I wish I could get a brother to sew up a single Bronze Tiger one of these days.

Posted by Diabolu Frank at 4:43 PM

Frank - Thanks for all the kind words and shout-outs! I wish I'd gotten a better shot of the Atom. That guy was super nice! His real name is Adam (seriously!) and his twin brother directed most of the mass photo shoots at DragonCon. They do a great bit where both twins wear Madrox Multiple Man shirts. It's really clever!

Frank - I completely forgot to mention that the Indigo Lantern Atom turned up at the Blackest Night Green Lantern photoshoot as well!

Shag, it was the other way around, with you directing me to the Blackest Night pictures but skipping obscure Adam here. I remember seeing that clever Madrox picture, so I'll try to incorporate it into an update. You took so many great pictures, I have to spotlight them in waves. I'll do the Indigo Atom with the Black Lanterns!