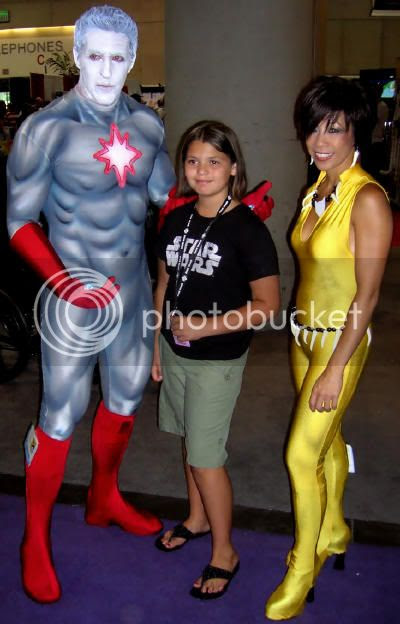 You know, I was a fan of Captain Atom long before I was interested in the Mighty Mite. I guess since I was introduced to the Captain during his peak visibility in the late '80s, I never realized how unpopular he was. Two short-lived runs in the 1960s at Charlton, then sporadic appearances in low-rent publications during the '70s & '80s. Leadership of the other JLI team in the 1990s, while his tepid-selling solo series plodded along for five years. Various heel turns, a few mini-series, membership in super-groups nobody cared about, plus a few cartoon appearances. That's Captain Atom's career, and that's a shame, because it seems to me marrying the Captain America of the 1950s to Dr. Manhattan makes for a seriously compelling super-hero.

All this is to say that there isn't a lot of Captain Atom costume play to be found, and I feel bad that he's missing out on the dress-up fun my other blogs are enjoying. However, you can do a hell of a lot worse than this bitchin' ensemble with make-up from the 2007 San Diego Comic-Con International, and much worse company than Vixen from Justice League Detroit.

Posted by Diabolu Frank at 4:03 PM

Is that Vixen and Captain Atom's kid, I wonder?

Captain Atom wishes. The Lady is a Fox, as the tagline went. :)

Thanks for writing this blog, loved reading it

Great post, I am almost 100% in agreement with you