Power of the Atom Podcast #611 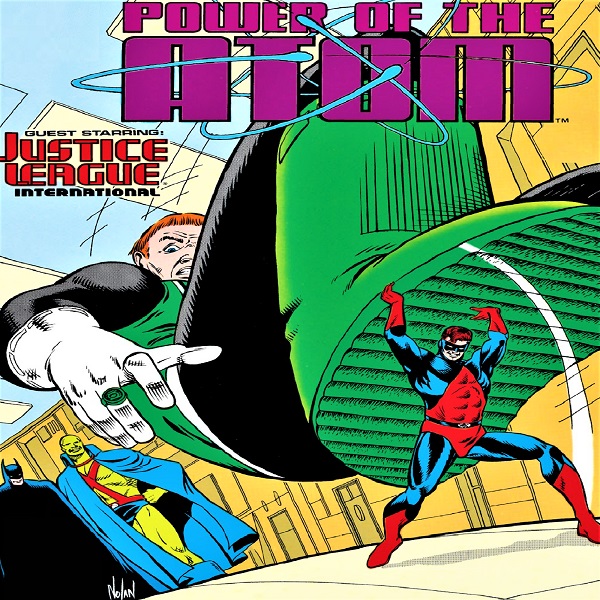 Counting a Maxwell Lord Bonus Book, in the third story from Justice League International #24 by Keith Giffen, J. M. DeMatteis, Kevin Maguire, & Joe Rubinstein, the team has a post-Invasion super-hero party at the New York Embassy. It doubles as a recruitment drive for a second European-based division. Everyone seems happy to see a "real" Green Lantern in Hal Jordan, especially Hawkman. Hal himself is pleased to see Ray Palmer and Ralph Dibny, saying it felt like old times. He's got his back to Katar and doesn't reference him, so it's almost as cold as when Ray says "Too bad Flash couldn't be here." Wally West was standing right there, but Elongated Man sort of consoled "He means the real Flash, Wally." Meanwhile, Hawkwoman was on the other side of the room with Ice being sexually harassed by the Creeper.

The Atom sat on Hal Jordan's shoulder in silent agreement as the Corpsman assessed "This isn't the League I know." Hawkman thrust his finger angrily in the general direction of the group, warning that they should burn their J.L.I. invites if they knew what was good for them. Katar continued to excoriate the undisciplined, self-indulgent, irresponsible, foul-mouthed, immature misfits. The Thanagarian hoped that his circle of men of character and fortitude would be a good example to this lot. Atom piped in with the defense "Aw, c'mon Katar-- they can't be that bad. J'Onn seems pretty proud of this bunch." Hawkman countered that the Martian Manhunter had changed too, singing and dancing on the front lawn while looking like Gumby when he thought no one could see him.

When some temporarily shrunken Khunds were spontaneously restored to regular size, they unwisely confronted the heroes, and Atom was one of the many metahumans tripping over themselves to round the aliens up. Having served his role of disgruntled fan proxy to the hilt, Hawkman finally took this moment to quit loudly and directly to J'Onn J'Onzz's face. It would have been really cool if Hawkwoman had stayed on without her lesser half, but she would have soon enough been rebooted from the team regardless. Meanwhile, shameless Elongated Man took the opportunity to sign-up for Justice League Europe.

Back in his home title, J'Onn J'Onzz strikes an Uncle Sam pose to declare that he wants Atom for the JLI. Ray's already declining at the top of the following page. Palmer starts off on the "it's not you, it's me" tip, but without any provocation slides right into "but actually, it is you." The Atom thinks that there are too many bozos and jerks on the team, and when Guy Gardner leads a drunken conga line into the room, Ray asks "Didn't we used to fight guys like him?" Sure, Ray's life is a mess and he hasn't settled into his old life again, but mainly he doesn't want to spend time with guys with the manners of Attila the Hun who would make ring projection bunny ears behind the Martian Manhunter's back. The Atom wasn't tolerating the open disrespect for himself and J'Onn, so he trips Guy so that he lands on his fanny and spills his beer.

Hal Jordan jokes that Ray Palmer should have been a Green Lantern, since the Atom wasn't afraid to interrupt Batman's own hard pitch to reclaim a classic Justice Leaguer. Looking at Guy and G'nort, Ray figures the Corps is in even worse shape than the League. If you want evidence that Hal's a moron, he took career advise from The Atom, star of exactly two short-lived solo series in the past sixty years, and the last one was three decades ago. But then, Hal saw financial stability in being one of the anchor series in Action Comics Weekly, soon to be reclaimed as a Superman solo monthly.

The Atom jumps out a window to escape this asylum, drifting near-weightlessly on the winds between New York skyscrapers. His newfound Al Pratt-style atomic punch allows him to rip the rear chassis off a drunken driver before he plowed into a celebratory parade. A cop alerts the Atom to a nearby riot, so Ray rides a tossed bullhorn before growing to talk sense into the crowd. Failing that, he racks a guy, as you do. Batman shows to congratulate the Mighy Mite on his nutcracking, and the JLI takes it from there.

Alpheus Hyatt accepts a collect call, and the Atom is back at Ivy University. Tricked by call forwarding, Ray walks right into a surprise welcome home party. Enrica Negrini used his return from Australia as an excuse for the celebration he didn't get when he unexpectedly came back from Brazil. Ray surrogate father, adventurer Ted Ralston, even flew in from the Andes. Norman Brawler pitched Ray on an expanded edition of his biography for the Warner Books paperback edition. Ray was never one for big parties, so he snuck off to brew some decaf coffee before planning to sneak out the back. He'd been looking for his ex-wife, Jean Hoben, who stumbled in looking for her own cup of java. They spoke for the first time since Ray'd come home, and it was the first Jean had heard of the deaths in Morlaidh. By the end, everybody was crying as the former couple embraced, including Enrica, who stumbled upon them. Jean's current husband Paul, recently chastized for hitting the booze too hard at the gathering, was quite the sullen boy as well...