Power of the Atom Podcast #609 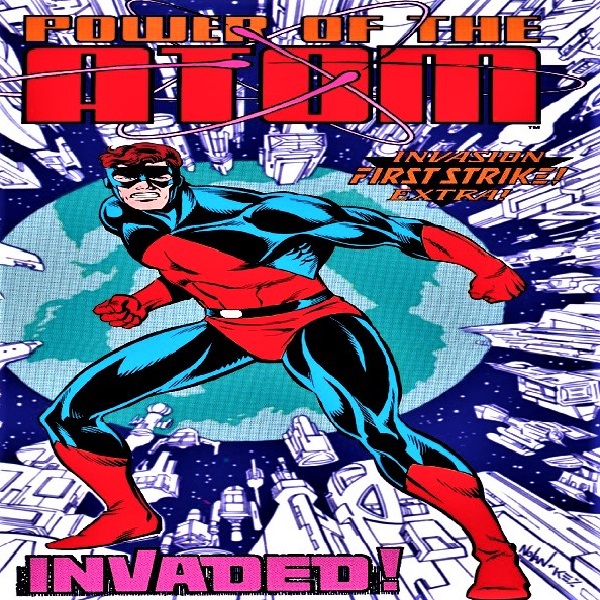 Chronos broke off hostilities with the Atom to address the greater menace of thinly disguised Yellow Peril Fu Manchu E.T.s crossing the border into... checks notes... Australia? So it's definitely 1988, the year Wolverine was both the shrimp and the barbie. Chronos had popped in a VHS tape to record the Dominators and Khunds demanding Earth imprison its metahuman population, and if I recall correctly, Invasion! was where the term "metahuman" got popularized at DC Comics. There's also footage of the Alien Alliance surrounding the Earth with an armada of battleships, so Chronos tries to get Atom into shaking on a truce. Ray leaves Clinton hanging on account of that whole numerous murder attempts rap, which really puts Clinton out. Honestly, I think Chronos wanted his value acknowledged and to maybe even form a friendship with Atom, or else why keep making excuses for not just killing him when he had the chance? Ray Palmer is just not a forgive and forget kind of dude, and once he decides you're not worth messing with, he ain't gonna.

In one of those "Simpsons predicted the future" moments, when The Atom uses the branded phone of future DC overlords', that's AT&T-- reach out an touch someone. Reach out and touch... an Australian. Actually, there's aliens working the old-timey switchboards like Ernestine going "one ringy-dingy," allowing the Atom to drop his load in a Khundian earhole so deep, put his hairy butt to sleep. Also, on the floor, because that Knund was sitting on an office swivel chair before he passed out. This is the kind of insanity that doesn't get translated into the movies, folks.

The Tiny Titan dodged a laser blast from another Khund that barbqued a Citadelian that had tried to grab him, then shifted his mass to hit that Khund full force to lay him out. Chronos was still on the phone counting up to make sure the line was clear for Atom, so Ray picked up the phone just long enough to tell Clinton he'd see him after the war and hang-up.

Okay, so the book actually started with the Atom in the rafters of a warehouse, where Khunds are forcing Aussies to load a truck. The Tiny Terror shrank and dropped on the back of a Khund's neck, and that panel served as Atom's tiny cameo in the second issue of the Invasion mini-series, redrawn by Todd McFarlane. Reminds me of a cartoon from one of DC's free advertorial comics that had Jason Todd on crutches complaining that in his one chance to get drawn by John Byrne in his prime for Legends, he got beaten by a mob and left in a cast for the rest of the event.

The Atom grabbed a blaster pistol and shot another Knund in the nards, and the point of all this dirty pool is to show him as a no-nonsense warrior. That Amazing Heroes article I referenced last time made out like the book wasn't selling and these Invasion tie-ins were intended as a soft relaunch of the book. They had a new artist and a new attitude with the hope that the crossover would expose them to a broader audience. But again, the Sword of the Atom was whet with the blood of little, yellow, different, better aliens. Why were these cut-rate Klingons getting kid gloves with little tweeting birds circling the head of that dude who Atom gave that bop that make you break yo neck?

In a hash of U.K. cliche dialogue and one guy who is clearly Crocodile Dundee, the Aussies congratulate the Atom and ask what he's doing in Oz. Like when you tell someone "how ya' doin'" and they actually stop and tell you in detail exactly how, in fact, they are doing, Ray spends five pages telling them what I told you at the start, including the part about Chronos showing the video of the aliens making their demands like the Aussies didn't see the broadcast themselves before they were literally captured by those aliens and forced to work by them. Taking a page from John Oliver, it's like Dumb Inception. It's like Inception, but really dumb. You got my flashback in your flashback.

The Aussies decided to put on Khund armor and help the Atom infiltrate a labor camp. Should I add a "u" to "labour" when it's an Australian fictional alien labor camp? Also, why is there a superfluous "u" in "labour" but not in the Labor Party? I think the U.K. is just pulling one over on us Yanks with their notoriously dry wit, laughing at ever "u" and how Madonna used to try to pronounce them with her fake accent when she was married to Guy Ritchie. Also, why did people complain when Snatch was really similar to Lock, Stock and Two Smoking Barrels but better and make Guy Ritchie self-conscious, so that he started remaking Italian dramas with Madonna instead of just doing more hyperactive and stylized heist movies, the thing he was actually good at. Where were we? Oh yes, Ray Palmer spending a page telling Crocodile Dundee his origin story again, plus a clumsy transition to Jean Loring-Hoben making her new husband Paul jealous by worrying over her ex fighting aliens. All of those theoretical new fans are going to be all over size-altering Al Bundy telling them about his four touchdowns in one game.

Chronos finally made it to Cape York Peninsula by this point, and used his timey-wimey aircraft to evade some Daxamites feeling themselves with new super-powers. On the ground, no matter what you think of Australians, they did not fool the Khunds for a second just by wearing their body armor. I remember fondly back to 1988 when I first encountered the Atom shrinking and altering his density so that he could fire himself like a bullet through a Khund's body. I mean, it was just the shoulder, but the Atom was like the Wolverine of non-lethal, impermanent trauma to an anonymous alien's non-vital appendage. DC Comics-- There's No Stopping Us From Being Milquetoast Until Dan Didio Turns The Entire Universe Into A Bill O'Reilly Wet Dream. Tell promotions to work on that tag line. A bit unwieldy and dated.

Chronos reaches the base that Atom called into, then uses his time-memory powers to see a flashback of the Atom narrating a flashback to when Chronos ran a tape flashing back to the aliens making their demands. Scintillating. Meanwhile, it's full revolt at the work camp, as men in torn shirts with purloined laser pistols and the aliens who had the legal right to own and carry said blasters shoot at each other until people die in a bloodless, Comics Code Authority approved manner. This gets the Atom so upset that he may have caused some aliens to accidentally run into each other which perhaps caused fatalities but remains open to interpretation. Also, his costume is strategically torn to show off a bit of man-boob and be easy to replicate across several guest appearances in other event tie-in titles. Oh, and Chronos finally reaches the labor camp, where the Atom continues to refuse to have anything to do with him, so Chronos fires a cannon at him that turns out to be directed at a Khund aiming at Ray from behind. The Knund is aged to dust by the blast. Kill of the week goes to Chronos. Good luck with reader retention on the strength of that. Speaking of crossovers, the Atom joins up with a host of other super-heroes to attack an Alien Alliance base in-- Melbourne, I think? Everyone assumes Australia is just one big Mad Max back lot, so wherever. In another flashback but from Hawk and Dove #1, Ray's palmed by Oberon, who seems quite pleased to tower over someone else for a change. These aren't the kind of cameos that do Ray any favors. He also gets another panel in Invasion! #2. Nobody thinks that Invasion was Todd McFarlane's best work, but when a paunchy red and blue bean bag goes flying past the Creeper during the super-heroic assault on an alien base in Melbourne, the Toddster gives Atom particularly short shrift.