Power of the Atom Podcast #607 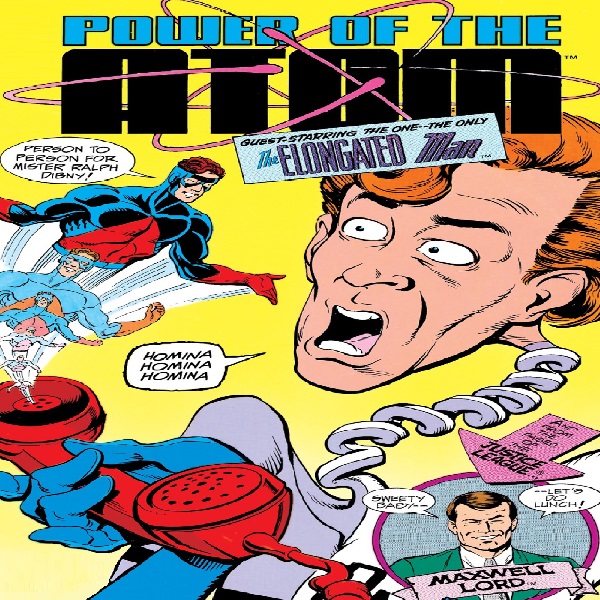 I somehow missed covering this story on Shag's Justice League International: Bwah-Ha-Ha Podcast this week. Probably on account of how I didn't do any research beforehand, only looked at the assigned issue the day of recording, and never read #5 before today. That'll do it. Maybe a week of daily podcasts has worn me down, but I just can't get mad at this one. Skipping the flashbacks in favor of editor's notes probably helps, but I figure it's mostly that I like the Atom hanging out with his old Satellite era Justice League buddies. The "bold new direction" horse is well out of the barn by this point, so might as well take comfort with the sheep on the pasture. Not like that. I'm clearly not good at metaphoring. Metaphorizing. Websters says "metaphorizing." Who knew that kid would pick up such big words around Alex Karras?

In this issue, Ray phones into the C.I.A. office of Everett Bailey, who freaked out over both the security breach and the prospect of having the perpetrator in his stable of operatives. However, Ray "nah dowgs" the C.I.A., then phones out with little explanation. Bailey pitches a fit, and lets slip that he might have had something to do with Operation Fireball in front of a non-corrupt subordinate. Scene shifts to the sunny beaches of San Clemente, California, specifically a cliff-side mansion. A mobster and his tower henchman make a bunch of time puns and prepare for a well researched confrontation with the Atom like we didn't already immediately know that this was Chronos. It's the only Atom villain that anyone can name, assuming they could name an Atom villain, which is not a safe assumption. You're more likely to get someone like Vandal Savage from a DC's Legends of Tomorrow watcher. It's been over a decade since the last attempt at an Atom ongoing series. If you don't teach your kids at home, there's no telling what they'll pick up on the streets.

The Atom next phones in to the New York Embassy of Justice League International, a call that startles Oberon right off his bar stool. Despite scoring a direct extension to the super-team at their current number, the Atom still plays off like "I don't recognize any of these team members" from the onscreen duty log. What, you couldn't ask Norman Brawler, "yo, who's J'Onn J'Onzz and the Batman been teaming with since I've been gone?" Plus, Ray's one of those "The Batman" people. Dude, you were never cool with Batman if you're "the"ing him. Fake familiar. Ray's all like "I'm just here visiting, not looking for a job, where's everybody and what's your 401k matching plan?" Also, Ray stays eye-to-eye with Oberon, which is courteous, except he instantly jumps up to full size the second Maxwell Lord walks through the door. I see you, Ray. Eyes on you, bruh.

Despite making all the overtures of being on the market, Max Lord is way too thirsty for the Atom. He's oily to begin with, but Ray has got to know by now that nobody that hot for the Mighty Mite is offering a good scene. Maxwell Lord once used his superhuman persuasion powers to force the Huntress onto the team, and her super-hero ability is crossbow. She can use a mechanized weapon from 650 B.C. I don't think she's a master with it or anything, and I think archers laugh at their accuracy, and there's barely a competitive sport for crossbow, so it's kind of like being able to set the recording time on a VHS at this point. Related: my father is too cheap to spring for broadband, and still uses multiple VCRs to tape his broadcast shows each night to avoid commercials. He's the Huntress of VCRs, but I'm not recruiting him for my super-team.

Most of the JLI are in outer space trying to fly to Apokolips, which seems inefficient, and that's what Oberon tells Ray. Mike's Amazing World then lost its mind over the glaring continuity error of only part of the team being in space and the other part staying on Earth to fight Lobo and don't even get him started on the European team, I guess. Whoops, JLE forms after Invasion, so my joke has a glaring continuity error. Calm down Mike. When people ask me how I'm doing, I don't bring up my hemorrhoids acting up because of all the time I spend sitting to work on podcasts. Thank you for your interest, but the League is in outer space at this time. That's all you have to say. We'll pass a message to Martian Manhunter when he gets back, because The Batman damned sure won't be calling.

Ray's still playing off the "Who's this Captain Atom that stole my name while I was gone" despite knowing he came out a year-and-a-half after the Charlton hero, but "I don't know him," right? Despite there being a perfectly good phone that he came in on, the Atom has to walk out the front door of the JLI Embassy in front of a gaggle of reporters camped out there and still be like "no comment." You know what you're doing, Ray. "Oh these paparazzi follow me everywhere I call to tell them where I'll be. Everybody wants desperately to work with me according to my solo title and nowhere else." The Atom is the Lindsey Lohan of super-heroes over here.

Ray Palmer then goes to a diner with a hat on, pretending that he hopes not to be recognized while racking his brain for anyone else who might be excited that he's back, and could tell him how much they enjoyed his biography before he pulled a Greta Garbo. "Oh, don't speak of my New York Times bestseller, I only want to live my life in anonymity while seeking out publicly known super-heroes to be photographed with." He peruses a newspaper, which I guess is like the MSN homepage, but nobody who looks at the MSN homepage hasn't held a newspaper before, probably that very morning at Denny's. There's an article about how the Elongated Man and his literal better half who everyone prefers to him are vacationing in Florida, so Atom makes some more phone calls. Slag on the Tiny Titan all you want, but instantaneous transport by telephone is one of the best powers. I've been on a plane for a literal day. I'll take that over eye beams, thanks.

Ray finds his old pal Ralph Dibny, and asks how he deals with being a celebrity without a secret identity. Ralph explains that he's a fame whore who married a rich debutante who leaks is vacation itinerary to the media and will happily upend his life and move to France at Max Lord's beckoning in a few months. Ralph is named Ralph. Why even try to front. Elongated Man and the Atom team-up to confront parrot smugglers on the high seas. You think I'm kidding. Like me, the writer has given up any illusions that Power of the Atom will last much more than another year, so we're going with armed parrot smugglers who wear Penny Loafers. Ray Palmer isn't looking for fame, so he keeps his name out of the papers when the Dibnys are interviewed on the dock with the perpetrators in Dockers. I'm sure that was entirely down to privacy concerns rather than not wanting to be associated with parrot pushers in print like sad, desperate Elongated Man. And talking on sad spectacles, the issue-closing teaser is tubby middle-aged Chronos burning his old clown costume in favor of a bland tunic that hides his spare tire. Not gonna lie, I'd wear it, too.