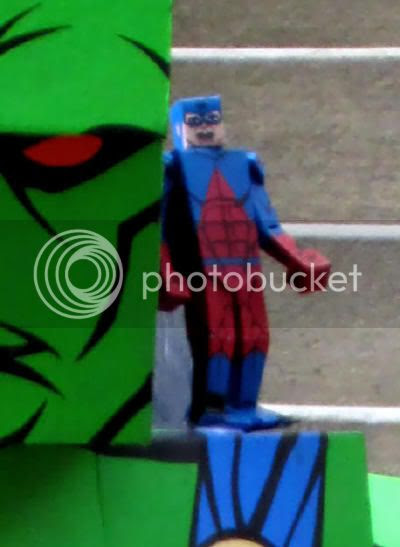 Atlanta, Georgia's premier comic convention was held on August 30th-September 2nd, and as ever, the Irredeemable Shag was on the scene to record the festivities. The biggest cosplay con in the dirty south saw the induction of the Atom into The Box Hero Corps. 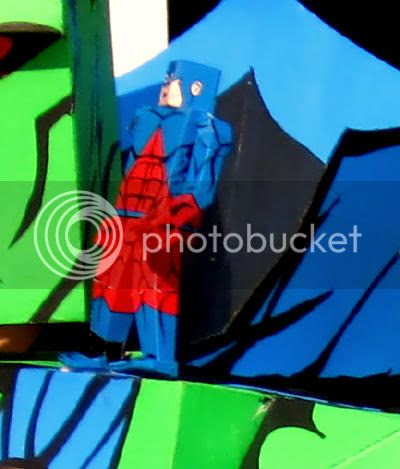 What the hell are "Box Heroes" you ask? Well, you know how people like Lego figures, and then other companies started doing blocky miniature figures like Legos? Well now people dress like those things, and make their costumes out of cardboard. Maybe it's a statement against the growing expense of cosplay in a harsh economic environment. Also, it might be a reaction to cosplayers with gross bodies, or maybe they get tired of seeing the outlines of geeks' peen. I know I sure do! Is there some sort of Poindexter ethical code against stopping by Academy for a jock strap? Anyway, note how I failed to use "box" as a double entendre, as though I selectively enlarge key photographs in search of camel toes? Oh, you did notice that, huh? Yeah, I might be a little bit gender biased when it comes to wardrobe malfunctions. 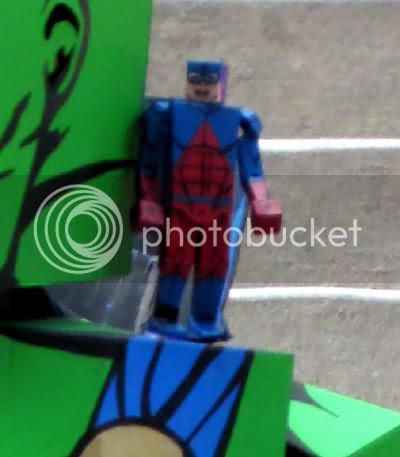 Speaking of genitalia, why does the Tiny Titan have a tinier pee hole prominently poking out of his crotch? Somebody took the time to carefully craft a six inch (so he claims) Atom figurine, drew facial expressions, detailed the ears coming out of his skullcap, colored the costume, and then put a dot in his bikini zone. There are plainly abs there, so there's no passing the Mitey Meatus off as a bellybutton! Who would do such a thing? 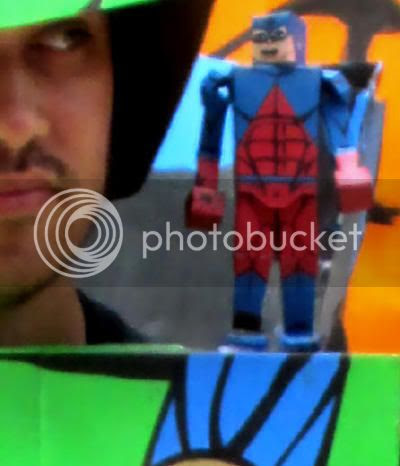 This guy. Right here. The one scoping out the Palmer Posterior. This guy drew a pee hole on the Tiny Titan's tiny titan, or an agent in service to this fellow. Add his name to your neighborhood watch list. File under "Premeditation" and "Aberrant Ideation." Query: Why such large hands and feet? 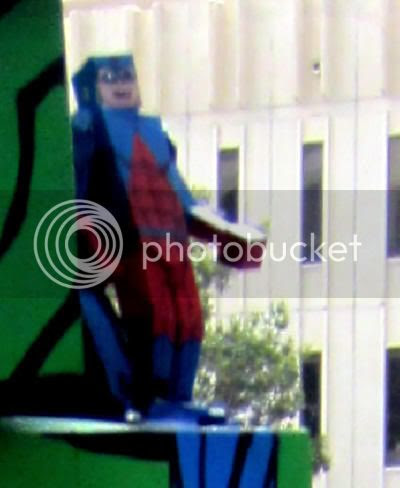 "It... it wasn't me! It was Ray Palmer! He's always whispering in my ear... telling me to do things... bad things. Please, help me. Stop me before I kill again..." Seriously though, this picture is terrifying, like the ventriloquist's dummy from Magic or the big reveal at the end of Sleepaway Camp. 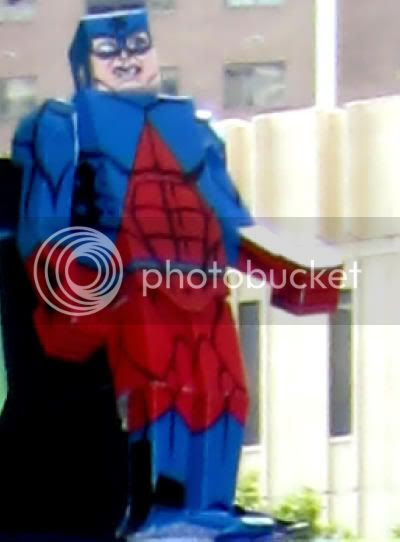 Oh dear Gods... it's like one of those holographic Jesus pictures whose eyes follow you across a room. Hell, it changes expressions. I think I've made it angry. Ackgrglghhhh!?!?!?... 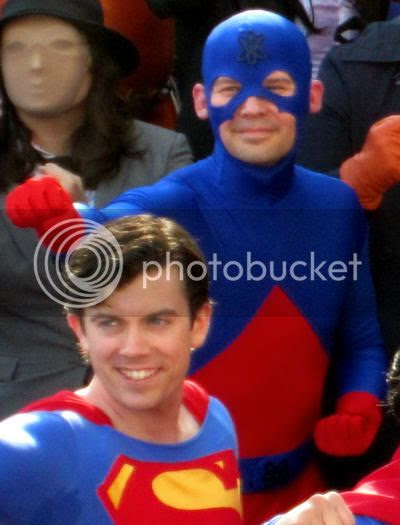 Thwap! It's a living, breathing, human Atom cosplayer to the rescue! Take that, you Shipping Box Servant of Satan! 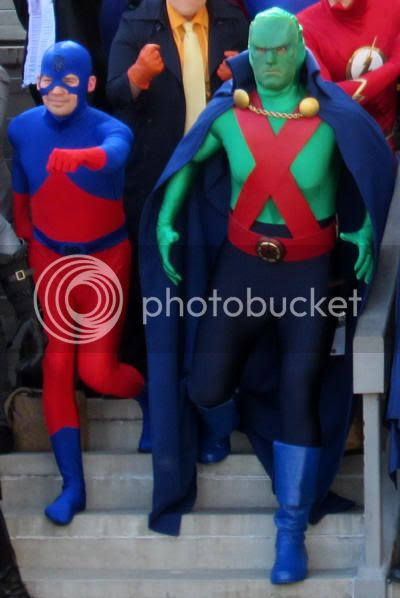 Not only that, but he's brought the fleshy Martian Manhunter cosplayer to take out the cardboard one. I believe this exact same duo ran together in Shag's pictures from 2010, although the quality of those Atom shots had me wondering if the Mighty Mite's appearance wasn't a trick of the light, like a Sasquatch sighting. I could count dozens of Batman, but 2010 Atom was a true urban legend. This year's shots of the Tiny Titan were much better, not requiring the services of F.B.I. facial recognition software or anything. 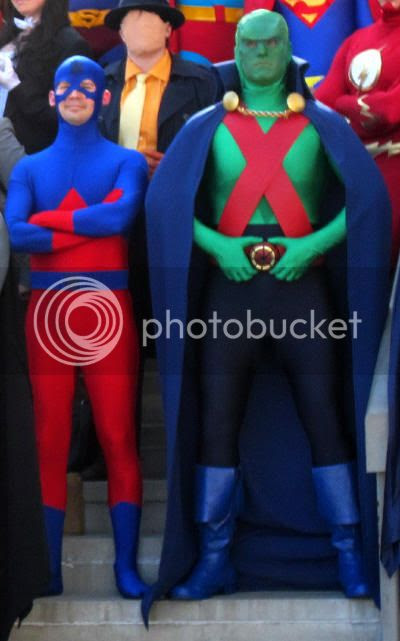 Back when Damian Maffei was still running The Tiny Titan Blog that was directly responsible for my dumb ass decision to carry on its legacy here, we talked about how we liked one another's characters, and thought it a shame that then as now they had virtually dick to do with one another after decades of DC Comics. Here I have two cosplay sets pairing the Alien Atlas with the Mighty Mite at the same convention. I suspect the primary factors in this equation are that Hawkman cosplayers already have enough trouble with the wings and helmet to add a facsimile Atom to their gear, and Aquaman is finally too popular to get stuck standing next to J'Onn J'Onzz anymore. They're pals because no one else will have them, the true forge of modern relationships built on diminished expectations! 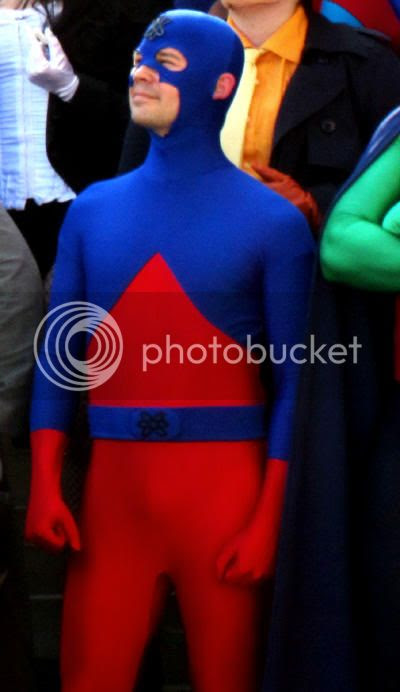 Shag wanted to make sure that we all thanked the Superhero Costuming Forum for setting up these photo shoots every year, and you might also check out the Irredeemable One's gallery of nearly 700 pictures. If that prospect feels a bit imposing, you might also sample one of these lovely blogs for more fine tuned targeting of demographics...

I never thought I'd live to see the day of Atom getup.

Outside of my own, that is.

A little padding of the upper torso, just a bit, and he'd be pulling it off.