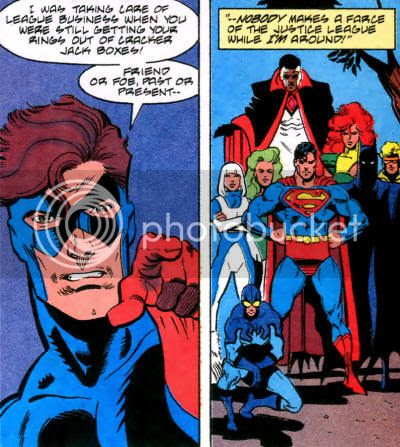 "It was never like this in the old days. Sure, we had our share of problems. Green Arrow and Hawkman were constantly bickering-- but deep down they really respected each other. Their differences never led to a blow-out like Superman and Gardner's. I mean, some of us thought Barry was a little square. --But how can you question a guy who makes the ultimate sacrifice? And even though Ralph got a little silly now and then, he always came through in a pinch. I doubt the same could be said of Booster Gold and Blue Beetle. Yeah, I came here to check these guys out-- and I'm not sure I like what I've seen. Spend a couple of days spying on a group like this and you should end up being impressed... Thinking over how this day's gone makes my head spin."

Along with his many other creepy quirks, Ray Palmer was also a bit of a stalker conscientious objector. After the Justice League returned from outer space, the Atom continued to observe them in secret and came to disparaging conclusions. For instance, Maxima's legal troubles were a blemish the Satellite Era would never have been afflicted by after tossing Barry out over that endless murder trial. Ray thought Ted and Booster were a couple of clowns who must have blackmailed somebody to get on the team Red Tornado. While Fire and Ice considered new costumes, the peeping tom Tiny Titan decided to set off a motion detector. After all, he'd been a skeevy voyeur wandering around their headquarters undetected, and wanted to see if they could pull it together against an intruder. 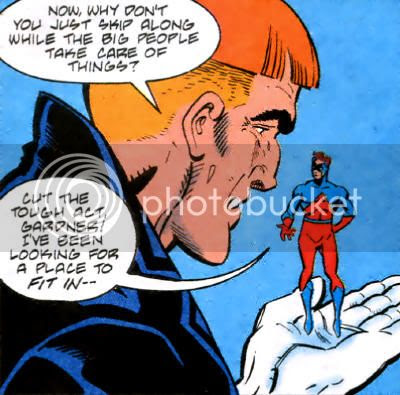 The Mighty Mite's timing was off, as former Green Lantern Guy Gardner had a new ring and wanted to rekindle his abusive relationship with Ice. After having abandoned the team on the last mission and been a dick in general for years, Guy's former teammates turned on him. Meanwhile Batman showed up, and pointed out that no one had checked to see if it was only Guy who had set off the intruder alarm. Sure enough, six inches of scampering stealth were on the loose, and on being made aware of this, Bloodwynd easily detected him with heightened senses. Just so Batman didn't come off too good, the Atom was actually hiding on his cape at the time, then ran up a tree to avoid questioning.

"The last few months of my life haven't gone great..." but the Atom wasn't about to let the League be disgraced by this public spectacle. "I thought the volatile personalities in the Suicide Squad were bad. But Guy Gardner beats them all." The Tiny Titan leapt up, landed on Guy's ring finger, then threw his weight into it. Ray actually used the term "atomized." Ugh. While Guy was injured and distracted, Ray talked some sense into him. Ray basically called Guy on being a jerk who was turning the team into a farce, but they still perhaps needed Gardner's power and the Atom's discipline. "I've been looking for a place to fit in-- and something tells me you have, too. Mellow out, and maybe-- just maybe-- they'll make room for the both of us." Guy was accepted back on, and Batman asked if Ray would also be staying. "Hard telling. This Justice League is quite different from the one I belonged to. I'd like to think this will all work out-- but I have my doubts."

"Together Again" was by Dan Jurgens with Rick Burchett.
Posted by Diabolu Frank at 2:12 AM