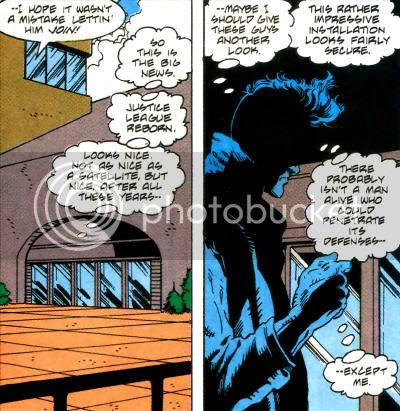 Justice League America, recently reformed under the ever-critical eye of Superman, was off to save Almerac from Starbreaker. This did not go over well with Maxwell Lord IV. "OFF PLANET? Who in the name of sanity authorized the Justice League to go off planet? ...Who does that red and blue, flag-waving boy scout think he is? ...He's trying to run my show! I built this league!"

Elsewhere in the team's new complex, a shadowy figure was alone with his thoughts. "So this is the big news. Justice League reborn. Looks nice. Not as nice as a satellite, but nice. After all these years-- maybe I should give these guys another look. This rather impressive installation looks fairly secure. There probably isn't a man alive who could penetrate its defenses-- except me. Hang on to your hats, boys and girls-- I'm comin' in."

"The Revenge of Starbreaker" was by Dan Jurgens and Rick Burchett.
Posted by Diabolu Frank at 12:28 AM