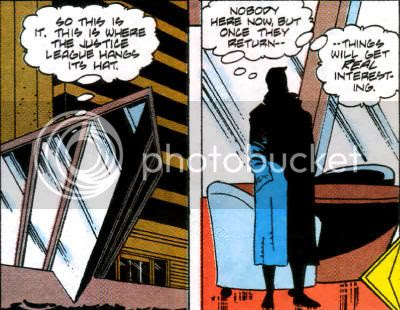 Justice League America stopped Starbreaker from lapping-up Almerac's fear sauce, although the power trio of Bloodwynd, Maxima and Superman did most of the... tongue drying-outing? The former latter middler was persona non rula on her home planet, so she piled into a spaceship with the rest of the team and headed back to Earth.

At their swank new headquarters provided by Maxwell Lord IV, a shadowy figure in a trench coat continued to shadow them from the shadows... or loiter, maybe? Squat. The guy was friggin' squatting...

"So this is it. This is where the Justice League hangs its hat. Nobody here now, but once they return-- things will get real interesting." Spoiler: Not really.

"Of Ashes and Justice" was by Dan Jurgens with Rick Burchett.
Posted by Diabolu Frank at 12:25 AM