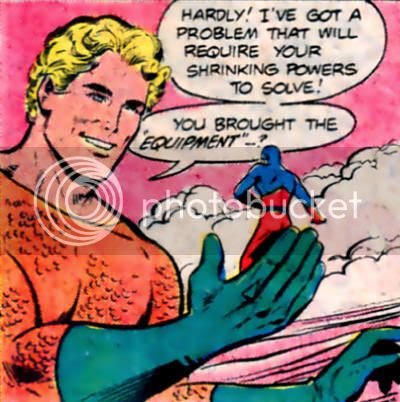 “The son of man and mermaid, Arthur Curry is the marine-powered avenger of the seven seas! Using a fragment of a white dwarf star, nuclear physicist Ray Palmer found a way to shrink to microscopic size! Together they are… Aquaman and The Atom!”

In the span of two pages, Aquaman pointed out that
a) His telepathic communication with marine creatures was always inferior to Hawkman’s talks with birds.
b) That in all his decades as a super-hero, he had never tried to hold a conversation with his finny friends.
c) That he was caught flat-footed on a Virginia shoreline by a bizarre new life form that sprang up on his him before shrinking away
d) How his lack of microscopic vision prohibited his following the creature.
e) That he would obviously need help on such a mundane case.

Clearly, the writer thought the Sea King sucked seawater, because of all the lesser lights reachable via a Justice League signal device, he brought in the Mighty Mite. “If this is your way to keep me from eating the tuna casserole my wife Jean was cooking…” Ho, ho, ho! It is to laugh, no? With his shrinkable rebreather, Atom was tasked with finding a microscopic needle in a haystack… of water! Laughter, yes? Anyhow, Aquaman figured if anyone could do it, the Tiny Titan was that individual. “That’s it—play up to the scientist in me! Believe me, I love it!”

Palmer’s a closet egotist, so believe it! He also thought the Sea King was lame. “Aquaman’s a nice guy and all, but he’s no scientist! His description of what I’m looking for leaves a lot to be desired-- unlike his firecrotch bride, who I should totally talk Jean into swinging with!” I may have exaggerated slightly there at the end, but only because Ray lacked Ollie Queen’s libido. He would be too busy with some new gadget to partake of the League’s Satellite Saturday key party. It must have driven Jean crazy! Oh, wait... 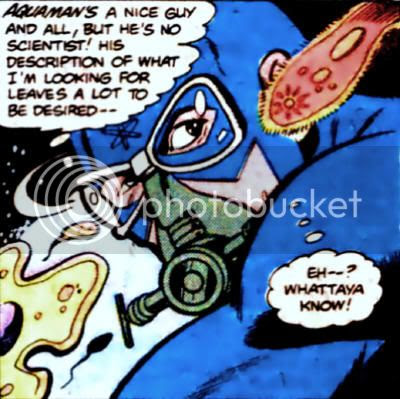 The World’s Smallest Super-Hero continued to spout some of the Bronze Age’s Worst Monologue as he addressed the size-altering amorphous creature Aquaman had set him against. “It’ll have to fight somebody its own size-- and hopefully it’s superior in intelligence!” The Atom was “eaten” by the blob, which proved to be the faster size-shifter, but revealed itself while becoming large enough to be seen by Aquaman’s adequate eyesight. Worse, it was big enough to allow Aquaman a “bad vibrations” reference before he wet himself escaping the creature.

“Swordfish, I need your help!” So did the Atom, who sorted out Aquaman’s confusion over what small creature within the blob might be trying to contact him by his super-heroic name. Yes, Bronze Age Aquaman was no slouch in the moron department. However, what he lacked in elementary deductive reasoning, he made up for with lines like, “Swordfish--surround the enemy--and jab--JAB--JAB!” I like to think his honeymoon also went something like that. “With enough stabs, the swordfish should numb the creature?” That method of contraception would explain the express conception of Aquababy. “Got to work faster! I’ve just lost some of my troops!” And you thought the rhythm method was flawed?

Remember the Atom? Within the jab-o-sphere, trying to recall his junior high magic act to hopefully use this swordfish gangbang of an undocumented life form as a Freudian nightmare of an escape route. After “repeated sword-thrusts,” the Atom exited through an orifice and grew to adult size. Aquaman was all set to have “my finny friends finish the creature off,” which I think was a hit for Heart in the late ‘70s, but Atom protested. “All right… but you better have a good reason!” Atom explained the creature was like a “blowfish,” or as corrected by Aquaman, “a puffer!” It detected Aquaman’s and Atom’s electrical brain impulses, and reacted with fear by expanding rapidly. However, Ray felt it was harmless, and just wanted to change out of his wet clothes. I think I could use a shower myself.


The Bronze Age
Posted by Diabolu Frank at 12:00 AM

Just killing some in between class time on Digg and I found your article . Not normally what I want to read about, but it surely was completely worth my time. Thanks.