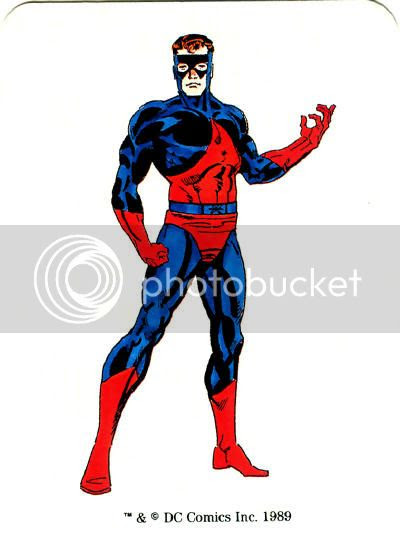 Kind of an awkward pose, and I feel skullcap > open hair, but I like this card. Ray looks bright and handsome, even if he needs his pants back. If you follow his stats, you'll note that he's an exceptional (mostly) human combatant with solid dexterity and martial numbers followed by a hell of a strong punch. Those intellectual skills are pretty awesome, too. 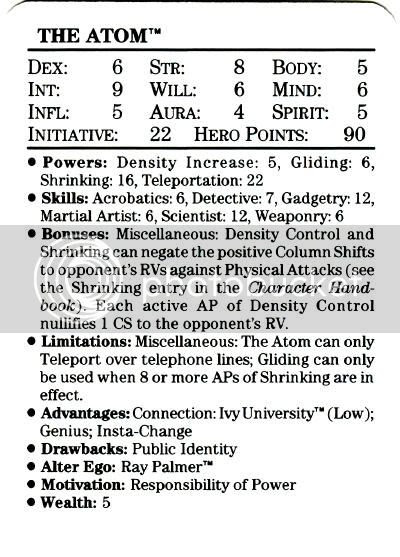 Belated thanks to Tom Hartley, whose offering of a batch of about 30 character card scans was the taste I needed to seek more. He then sold his box set for a very reasonable price to a poor student to facilitate this crossover, because I just had to scan them all for myself.

Am I looking at the stats correctly: Superman is smarter than Ray Plamer?! That's just not right.

They forgot to add "Evil Psychotic Witchy Wife" to Drawbacks.

I always preferred the open hair to the skullcap, but that's just me. I feel the same way about Cyclops too.

While I like Atom's costume with the sunroof open, it does look odd in this particular drawing. He looks sort of like one of John Byrne's Next Men.

Thanks again for suggesting the Mayfairstivus crossover. It's a blast!

Liss, there was still residual memories of the super-intelligent sci-fi Superman of the Silver and Bronze Ages in 1989. However, John Byrne had clearly made Clark much too dumb for all that, and he hasn't really made all that much progress since. He's what, an 8 maybe, on a good day?

Shag, I'm sorry we live in such polarizing times, but open hair will demoralize our nation's fighting forces and corrupt our youth. Just say no to '90s affectations, especially when the leftover material is reapplied to extraneous boxer shorts on the outside of the pants.