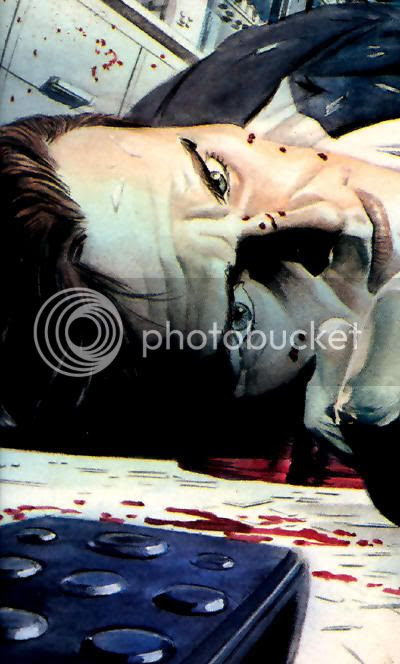 The Legion of Doom began truly knocking down dominoes, claiming Earth's super friends had abandoned her, while covertly attempting to murder their alter egos.

At the Midway Museum, curators Carter and Shiera dodged the potentially lethal fire of replica prop planes. Making their way toward maces, the Hawks smashed the tiny aircraft. Above their heads, a giant Toyman marionette hovered...

A woman in sunglasses wearing camouflage carried a bag with her on a rooftop adjacent an Ivy University science building. The woman constructed a sniper rifle, then aimed it at a room where Professor Ray Palmer was working on a computer. The distraction of a phone call caused Palmer to shift his body just in time to avoid his brains spilling across the monitor, but the bullet wound in his right shoulder left a mess all its own. While Palmer bled out on the floor, the anxious voice at the other end of the phone line asked, “Ray? Is something wrong? Ray?”

Tearfully, Jean Loring dialed another number on her cell phone. 22,800 miles above the Earth, Red Tornado’s severed head sat on a counter, teleportation technology at the Justice League Satellite disengaged…

"Chapter Four" was plotted and painted by Alex Ross. The script was provided by Jim Krueger, and the penciled layouts by Doug Braithwaite.

Continue the story through these character-specific posts: