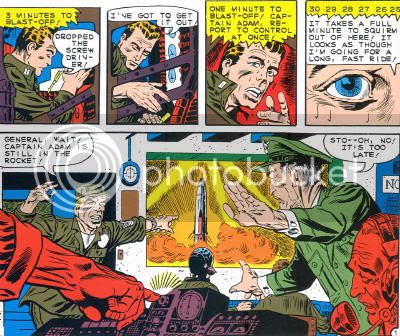 Technically, there was no DC Comics seventy-five years ago. First there was National Allied Magazines, followed by Detective Comics Inc. a few years later. All-American Publications, home to the Justice Society of America heroes, didn't join the World's Finest until 1945. I mention this because no one would disregard the likes of Green Lantern, the Flash, Wonder Woman, Plastic Man or Captain Marvel from DC history because they were in print before being acquired by that company, and fully incorporated into the mainstream DC Universe. Why then, should Charlton's Captain Atom face any discrimination? 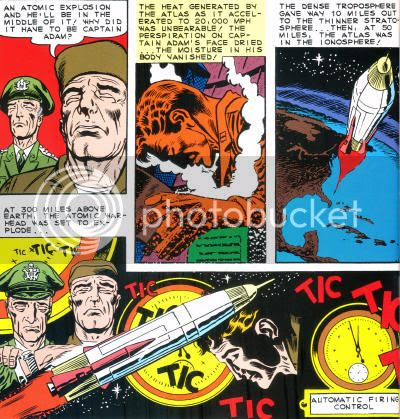 In one of the most memorable and influential origin sequences ever, U.S.A.F. Captain Allen Adam was accidentally launch into space aboard an experimental missile. For four harrowing pages, Adam sweats and strains, while on the ground his comrades waited for his death sentence to be carried out. Allen blacks out, crushed by the "terrific acceleration," heat evaporating all the water from out of his body. Every bit of horror and tension is wrenched out of these final, painful moments of Captain Adam's life before the explosives are triggered and every bit of "flesh, bone and blood," his "desiccated molecular skeleton," is atomized in an atomic inferno, leaving his fellows grieving below. Suddenly, the disembodied voice of Captain Adam calls out to his best front, arranging a meeting with his new, reincorporated, highly radioactive self. Through force of will and the superior mind, Captain Allen Adam had restored himself from nothingness to become Captain Atom. 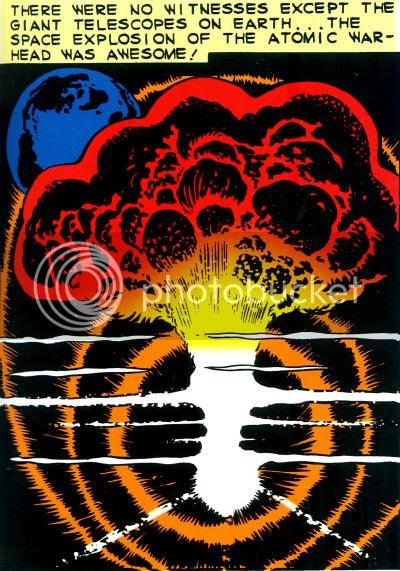 Not too many super-hero origins begin in their final moments of life, and few super-hero deaths are such drawn out, grueling affairs. For every Marvel Comics hero born out of an accident of science, for every Phoenix rising from the ashes, there is a debt owed to the ordeal of Captain Atom in March of 1960.

Check out more highlights from the past 75 years of DC Comics at The Truly Most Memorable Moments of the DC Dodranscentennial
Posted by Diabolu Frank at 5:37 PM