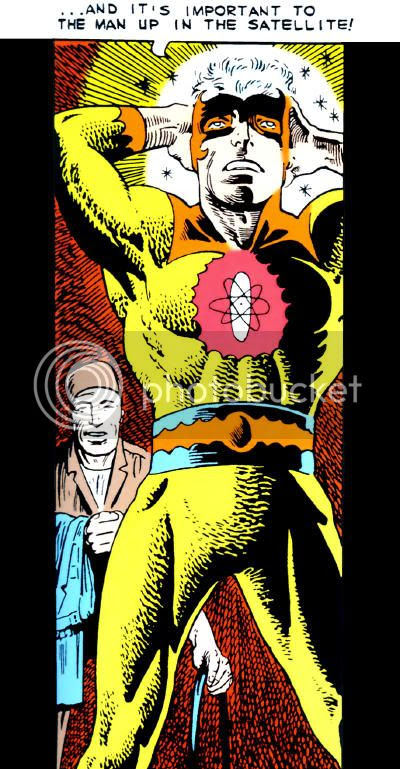 Every nation wanted to be first to send a “man-carrying rocket” into outer space, but the U.S. was months away when “the announcement came from behind the Iron Curtain… mission accomplished!” However, while the never-actually-named Soviets had managed to get their cosmonaut up, there was no word as he “hurtled around Earth at 23,000 M.P.H.!” The Reds didn’t know what the score was, but faked a response from the satellite to con the globe into thinking the mission was “an unqualified success!” Physicists at Cape Canaveral puzzled over the information they had, while Captain Allen Adam, U.S.A.F., asked if an impossible to collect “detailed picture of the missile” might help. After a very positive response, Adam rushed to meet his confidant Sergeant Gunner Goslin at an unused launching pad before heading up into space under his own power. “It’s important to our scientists and generals… and it’s important to the man up in the satellite!”

One lovely silent panel later, and “the man designated by the president as Captain Atom” was in the heavens, “past Explorer I… past the Sputniks…” The hero finally located the “man-carrying satellite,” and could detect the pilot was alive from outside because “I’m super-sensitive to heat… I can feel the heat rays from his body inside the capsule!” Okaaay… mmm… awkward…

The “first man thought to have entered space,” (because Allen Adam had secretly already gone up like a good American, y’see) was unconscious, and his life signs fading fast. The radio barked, “Comrade, this is your commissar! I order you to answer at once! The world awaits your answer!” Why the commander-who-isn’t-identified-as-Russian was speaking mostly in English, I can’t say, but Captain Atom was more concerned by the injuries the not-cosmonaut(?) had suffered internally during acceleration. The hero was compelled to help the foreign pilot, but inconspicuously, or “it could mean war!” Captain Atom disintegrated and reintegrated within the capsule, as he had done in his origin story, and determined the pilot needed a Yankee drug designed for just this problem to save his life.

Captain Atom flew back to Earth, past the Statue of Liberty in a silent panel, through a window at New York’s Medical Center. A shocked physician questioned “Who are you?” The harried hero dismissed, “Never mind that, doctor! Give me 1000 units of space vaccine at once!” The “brilliant” doctor wasted no time in giving the unidentified super-being a whole bunch of comic book medicine, because “it can only be used to help people…”

Captain Atom moved so fast he flew through the hospital establishing shot through to the next wordless panel and on into space. By the time Captain Atom returned to the manned capsule, the radio was declaring Igor a traitor for his silence. The pilot received an injection, and three mute panels later, he was revived. Igor confirmed that, “dah,” he was okay, and asked “You speak English? I am in space, no?”…How come you here? You speak like Americans I have known!”

“That’s right, chum! I’m Captain Atom U.S.A.!” Igor continued “But I am first in space! They told me that you Americans are a backward people, a pack of fools! Yet, you are here… in my satellite!” Captain Atom replied, “We get around, comrade!” Igor was also told his superiors would explain how to get down once he managed to reach orbit, “but I think they lied!” Captain Atom was kind enough to exit the capsule and act as rocket propulsion to return it to Earth. America's atomic hero deposited the capsule in a “great city” near “the arctic wastes.” Igor’s superiors were pleased at this “propaganda victory,” which allowed “once more we have shamed the West with our fantastic deeds!” Invisibly listening to the unconfirmed-commies gloating, Captain Atom smarted. “Looks like I helped a little too much! This is tough on the United States!”

Although Igor Kriss was proclaimed a national hero, he insisted that he was not first in space-- that he had been saved by an American who had won that race, and “The American’s accomplishment was far greater than my own!” Back at Cape Canaveral, Capt. Adam and Sgt. Goslin grinned and winked as their scientists wondered where in the U.S. there was a base better than their own that successfully launched an American into space first. “We kept that secret well!”

"The 2nd Man in Space" was by Joe Gill and Steve Ditko. This second Captain Atom story saw his costume colors reflect the cover of his debut-- golden armor with orange highlights and white hair. Captain Adam's first name was given as Allen, and his hair color switched from blond to brown. I don't recall his buddy Sgt. Gunner having a surname before Goslin, either. With the hilariously ludicrous jingoism jangling in this tale, I assumed it was an audacious reaction to Yuri Gagarin's trip aboard Vostok 1... which turned out to be almost a year away?!? I guess Gill was responding to projections that the U.S.S.R. would beat us into space, and launched a preemptive strike!

Posted by Diabolu Frank at 1:34 AM

I wonder if my insurance plan would cover space vaccine? I think incould use some of that stuff!

You know, I think I like this version of Capt. Atom more than the 80's one. He seems a quite cheery. But I bet back issues aren't too cheap...

I got hooked by the '80s series, and only just discovered this Ditko version. As night and day as the Questions, but I love both versions. I think between the two Archive Editions, all the Silver Age stories and maybe even the Bronze stuff got collected for less that a c-note retail. You can also get back issues of the '80s book for a song, but that was a fairly dark series for its time. General Eiling was kind of like DC:NF King Faraday, though.