"Meet Captain Adam... the Air Force career man who knew more about rocketry, missiles, and the universe than any man alive... A specialist of the missile age, a trained, dedicated soldier who was a physics prodigy at eight, a chemist, a ballistics genius! In short, Captain Adam was an invaluable space-age soldier even before that memorable day at Cape Canaveral, Florida, when an Atlas missile was being readied for blast-off... with an atomic warhead inside... and Captain Adam making the final last-second adjustments!"

At the three minute warning, Adam dropped his screwdriver in the cramped space of 1" x 1 ½" panels the missile, and had yet to retrieve it at the one minute mark. As the seconds ticked and sweat dripped from his brow, Adam knew there was no time to exit. "It looks as though I'm going for a long, fast ride!" The missile launched as a horrified control center watched. Adam's pal Sergeant Gunner mourned, "The best officer in the air force is in there!" Three panels showed Adam struggling to remain conscious from the tremendous heat in the nose cone. Adam slumped lifeless with a question mark hanging over his fate. A second silent panel followed the missile's flight. Gunner and General Eining considered Adam's fate-- the sweat and other moisture drying out of his body-- the explosion to come 300 miles above the Earth. The clock counting down the seconds to doom ticked incessantly-- until precisely on schedule, Adam's end could only be verified by telescope.

"At the instant of fission, Captain Adam was not flesh, bone and blood at all... The dessicated molecular skeleton was intact but a change, never known to man, had taken place! Nothing... absolutely nothing... was left to mark the existence of what had once been a huge missile! Nor was there a trace of the man inside!"

General Eining's shoulders slumped at the loss of "a good airman, a fine man," leaving an inconsolable Sgt. Gunner leaning against a wall in silence. Suddenly, a disembodied voice commanded Gunner to come to the launching pad. General Eining was still in earshot, and ordered the area evacuated. Three minutes later, Captain Adam appeared, his clothes in tatters, energy emanating from his body. "...Don't come too close! I'm as radioactive as pure U-235! Right now, you're getting a dose of radiation so you can't stay near me long! Look-- I disintegrated up there-- I integrated here again! I can't explain... but it will be possible for me to do the same at any time from now on! There's a special lightweight metal, diulustel, developed to shield radiation! I'll need plenty of that! We've got to make a flexible shield I can wear to protect those near me from death by radiation! Will you get it for me, General?" 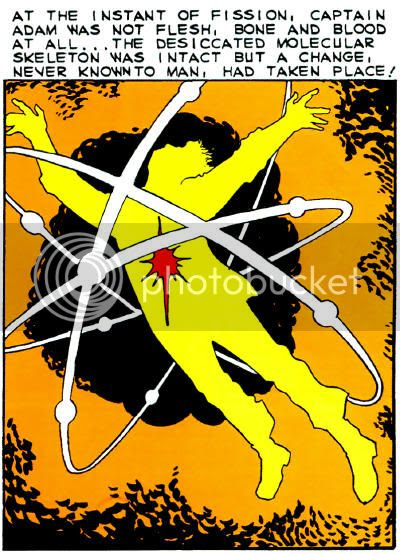 Eining did his best, while unbeknownst to him, a newspaper reporter had learned of Captain Adam's death and filed the story. Once it hit the papers, Eining decided Adam's continued existence "will be the nation's most closely guarded secret!" Thanks to the diulustel shielding, the rads coming off Adam's body were converted to a light spectrum frequency, so the captain could fraternize without worry. Adam also began developing control of his energy powers, which he displayed for a tiny group of the president's most trusted advisers. Adam could burn off any normal clothes he wore with a thought, propel himself at speeds over 20,000 miles per hour, and decelerate instantly. Captain Adam used his ability to fly to the White House and meet with the unnamed President Dwight D. Eisenhower, who believed "You, more than any other weapon, will serve as a deterrent of war! They must not learn about you!" Ike had a costume made up especially for Adam, and assigned him the code name of "Captain Atom!" Adam saluted Eisenhower before the stars and stripes. "Very well, Mr. President!"

Meanwhile, thinly veiled Soviet saboteurs programed a missile launching from Cape Canaveral to "land on our own huge industrial complex," providing an excuse to "begin a total war" with the United States. The nogoodniks were caught, but only Captain Atom could stop the Jupiter missile in flight. The Captain flew out into space, and detonated the warhead with one irradiated punch. Minutes later, he was back in the Oval Office, continuing to be liked by Ike. In a final panel soliciting comment on the new super-hero from the publisher, Captain Atom appeared before Old Glory once more.

In his forward to The Action Heroes Archives Volume One, Blake Bell claimed Captain Atom's stories were entirely redeemed their shoddy scripts by the magnificence of Steve Ditko's art. It's true that Ditko's storytelling was amazing, and the use of four silent panels in a nine page story (never mind the ten with minimal dialogue or accompanied by detached text) was groundbreaking. Still, from their insane Fletcher Hanks' type illogical leaps to their red baiting jingoism, Gill's scripts are a delightfully gonzo time capsule from deep in the heart of the Cold War. It's also interesting to see how different this Captain Atom was from the better remembered later versions. Garbed in a silvery blue metallic costume with gray-brown trim and yellow accents, Captain Atom vaguely recalls his '80s revival, aside from his strawberry blond hair. The strip is extremely patriotic, with a supporting cast made up almost entirely of sympathetic enlisted men, and the American flag appearing in six panels. The emphasis on scheming commies and the endorsement of a republican president should clear up any question as to the strip's political leanings. Note too how similar Captain Atom's reconstitution and reappearance scenes, surrounded by a symbolic atomic icon, are to Gil Kane's "Birth of the Atom!" a year and a half later (coinciding with the Captain's final appearance for four years.)

"Introducing Captain Atom" was by Joe Gill and Steve Ditko

Great coverage! I really liked your recap. To the point, but also humorous and entertaining.

It's true! I was introduced to everyone but Thunderbolt through their late '80s DC incarnations, which often intentionally veered far from the source material either because of political differences or a desire to distance themselves from Watchmen. Going back to the source, I wonder if Moore's work would be as revered if folks knew he was mostly just being faithful to Gill/Ditko at a time after society had gone in a very different direction.

Did Captain Atom have the same kind of disinterested mentality of Dr. Manhattan after his incident? I'm guessing that was all Alan Moore, but was curious.

And how come his hair didn't burn off? (Or am I overthinking it?) Then again he has hair in the 80's incarnation, but it's got some kind of hair shield on it. Actually the latter makes less sense...

Actually, '60s Captain Atom was very much a gung-ho type. He seemed like he wanted to punch the very concept of communism in the nose. So far, the strips are all red-bashing and outright nonsense, which I personally find awesome. Whereas I do nothing but read into the psychology of the Ray Palmer Atom stories, there is only text in Captain Atom stories. Deep? No. Rad? Yes!

Based on his origin, Adam reconstituted his previous self, so I guess having hair is perfectly plausible. If you lose the hair, what about the absence of water in his system. or just plain being atomized at detonation? Anyway, hair was the only thing seperating '80s Captain Atom from the Silver Surfer, so what else could be done? Besides, Nate Adam had boss hair. I want to be like him when I grow up.

I have a soft spot for the patriotic types. Every Fourth of July I watch Yankee Doodle Dandy (and the Twilight Zone marathon...which they didn't air this year....)

Sometimes you just gotta take things at face value and give your brain a break. That's why Johnny DC titles amuse me way too much.

His hair was pretty cool in the JLI years. It was approaching Hal Jordan/Conan O'Brien Levels of Greatness.

Does anyone know the special ability for Captain Atom #72...Heroclix peice?

Roy - Check out this site.
http://heroclix.com/gallery/

Then scroll down to lg-072. Click it. A pop-up box will appear with his click stats and powers. If you hover over each stat it will tell you about the powers.