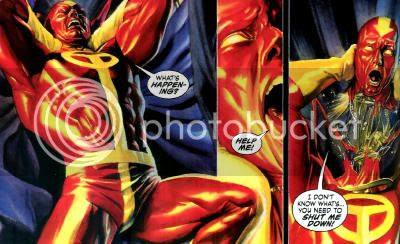 The entirety of the Justice League Satellite’s surveillance technology was unable to locate Aquaman. Red Tornado, as part of his duty as monitor, deployed the Manhunter from Mars to investigate. In the course of his search, the Sleuth from Outer Space also vanished, prompting the Tornado to rise to his artificial feet. “J’Onn? J’ONN? First Aquaman, now Martian Manhunter. Not a… Computer? Enhance southern South America.” Red Tornado followed up on reports from marine ships of unusual sea life migration patterns. Off the coast of Argentina, a pattern emerged—crosshairs that pinpointed the Sea King’s location. “You’re a clever man, Arthur.”

A figure had arrived through the teleportation tubes while this was going on, and made its way to Red Tornado, who anticipated the arrival. “I’m glad you’re here. I found Aquaman. He’s trapped in Argentina. Must be nice to have a psychic rapport with two-thirds of all life on Earth. I didn’t expect to be relieved for another two hours. What’s…?”

Suddenly, Red Tornado rose up from his seat and wrapped his own fingers around his neck. “What’s happening? Help me! I don’t know what’s… you need to shut me down!” The Tornado ripped his own head off, then continued tearing his body apart with his mechanical hands. “Someone’s controlling my motor functions! HELP ME! Why won’t you help me?!” Red Tornado’s bits and pieces lay on the monitor room floor, sitting in his internal fluids.

From his home in Ivy Town, Ray Palmer watched conservative commentator Jack Ryder on television, discussing “more reports of acts of miraculous and surprising philanthropy” from the world’s super-villain community…

"Chapter Three" was plotted and painted by Alex Ross. The script was provided by Jim Krueger, and the penciled layouts by Doug Braithwaite.

Continue the story through these character-specific posts:

I had forgotten how downright disturbing that Red Tornado-destroys-himself-scene was. Made me feel kinda bad for the guy...er...robot.

I bet you dream of Red Tornado tearing himself apart, though, am I right? Muahaha.

Also, will you be doing a writeup of the BN Atom Special? I can't wait to see what you have to say, becuase I think they messed up a crucial part of how Ray travels through phone lines. I could be wrong...

The RT scene looked cooler than anything that dumb robot ever did, but what weirds me out is how brawny he is there. T.O. Morrow must have been struggling with latency when he engineered that bit of beefcake.

I'm trying to figure out how I'm going to handle Blackest Night/Brightest Day. I feel I need to look at the Atom stuff pronto, but taking on that series across all blogs is daunting. Maybe I should start at BD #1 here and link out as available? Point being, when the Special is in my hands, I expect I'll get serious about this, because this Colony business looks to piss me off.

It weirds me out more that a robot is wearing shorts. Tight shorts.

Colony? Wait...did I miss something?

Hmm. Well, I think you could at least cover the special. It's connected to BD in name only, really, so if you want to steer clear of BD completely, you could still cover the special. (And Adventure Comics.) It probably wouldn't be too bad to cover BD even with all the characters you have. J'onn and Aquaman's stories have been pretty straightforward...Atom is just in a backup...Wonder Woman hasn't been in BD, I don't think? It's not outside the realm of possibility. I know I'm missing someone, but still.

Or you could start another blog in case you want to keep BN/BD stuff separate from your current stuff?

Maybe the Colony stuff is in the first Adventure Comics strip? I just toss through them atb the store until my copies ship.

I was being rather facetious with the "another blog" comment. Muahaha.

Hmm...I just flipped through Adventure Comics and there's nothing about a Colony. Maybe you accidentally saw it in the Legion story? (It might be in there...I didn't read it.) My only problems with the Atom special and the Adventure Comics backups are a.) he's written/drawn incredibly young and b.) he travels through cell phones and satellites, which I thought was impossible. Only landlines work, correct?

Originally it was only landlines, but it's since been established that he can pretty much travel through any environment at the right size. Plus, nobody cares about real science in comics.

I read somewhere that Ray's uncle with the insect ring was tied to a group called the Colony...

Aww, they changed it? Come ON. Can't we have any limits on anything anymore? Or is DC comics one big superpowered free-for-all where no one has limits on their powers?

Well, I care about real science. Real science should be in comics, like it was back in the 50's when they actually put scientific articles in between the comics. And kids should walk uphill to school both ways while they're at it, too.

Ohhhh...okay. Yes, the uncle with the ring. Now I see what you mean. They haven't mentioned the Colony yet, but I'll keep an eye out. Yes, something is definitely up with that uncle...

BTW, unrelated, but, have you read BN #6 yet, and more specifially, the last page?

My reaction exactly. Gone before we even knew her. Doesn't pay to be a hero created within the last 10 years.

And it especially doesn't make sense in light of Young Justice. (Unless she comes back to life at the end of BD.)