I wrote up the first issue in early March, and the second issue in early May. Since I've run out of months beginning with the letter "M," allow me to deliver partie trois a week or two early on this embarrassing bi-monthly schedule I'm on. I told yas before and I tells ya again, Damian covered Sword of the Atom - Book 3: Mourning's End 2 1/2 years ago. If ya gots ants in yer pants, you can reach the conclusion thereabouts, as well.

The Atom was faced with the prejudice of Voss, who had decided to judge Ray through the poisoned tip of his spear. “You’re wrong, Voss. I’m on Taren’s side… but that doesn’t mean I’m on yours!” The Mighty Mite evaded the spear, throwing his shoulder into Voss’ midsection, then rolling to kick him in the face. His jaundiced foe flat on his back, Ray assumed, “I guess you know—if I killed you now, no one would blame me.” Voss expected no less from a spy, figuring he’d be foolish not to. “I’m a fool, then. But we need you, Voss. Taren and I need you.” A truce was called, and Ray even figured Voss would make a good second-in-command. Taren knew he’d chosen his replacement as leader well, while lady love Laethwen was already getting sticky over the outsider, cooing before Taren’s gouged out eyes.

Back in Morlaidh, even King Caellich’s own men were disturbed by the public torture of Pohrager, as they pulled his weary body down off the cross. All was going according to the plans of the king’s treacherous advisor Deraegis. Emboldened, the manipulator had even begun toying with the ancient Star Drive, a forbidden act that earned him a backhand from Caellich. Even still, Deraegis’ conniving and tinkering continued.

Back in Ivy Town, Ray Palmer’s ceremonial coffin a few weeks to months in the ground, wife Jean Loring’s life was back on track with her “characteristic efficiency.” While her lover Paul showered, Jean claimed she was over the shock, and recognized all the evidence of Ray’s death was circumstantial. Resentful but certain the Atom yet lived, she booked a flight to Brazil. 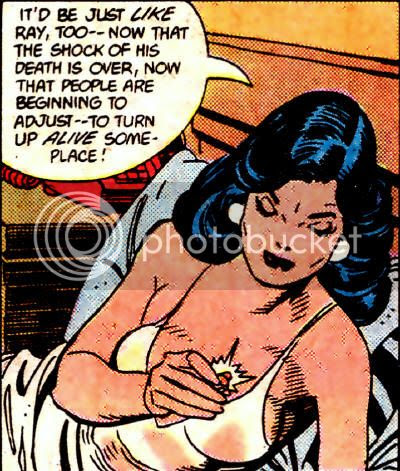 Voss wondered how much longer the Atom would put off the siege on Morlaidh, which prompted Ray to confide to Laethwen that he was procrastinating to delay Taren’s assured suicide. Suddenly, a stampede of jungle creatures heralded the onslaught of flesh-eating ants. The rebels’ former leader wished to succumb to the ravagers, but the Atom decked Taren and put him over his shoulder. The pair, along with Voss and Laethwen, climbed ever higher up a tree to escape the determined ants. When the opportunity arose, Taren fulfilled his death wish, diving blindly into the ravenous insect host. Taren’s last words noting what a good friend he had in Ray, the sword of the Atom swung at the creatures long after it served no good. As Laethwen cried, Voss consoled, “He’s gone, Princess. Taren belongs to the jungle now. As for the Atom, don’t worry… He’ll be up—when his arm gets tired.”

Later, the Atom decided he didn’t yet deserve Taren’s role as leader, and that while the jungle reigned today, he would not assault Morlaidh until he proved himself the master of his environment. Ray had considerably fewer reservations about assuming Taren’s role in Laethwen arms, though. The Princess gave a speech about how fast life ran in the savage jungle, allowing no room for lengthy grieving. Instead, Laethwen had begun her mourning once Taren was blinded, and had already allowed room for Ray Palmer’s (lengthy?) penis. “Is… is it too soon to speak again of love, Atom? Between you and me?”

Meanwhile, Jean Loring was in Manaus, Brazil, investigating the hotel bar and whining to any shmuck that would listen “Ray’s not the sort of guy who’d let a little thing like death keep him from making my life miserable.”

Having mastered the intricacies of microscopic trim, the Atom now sought to master the gol’ durn jungle, by way of tossing his poison tipped sword down a crocodile’s throat. I will stop short of drawing another parallel to his night with the princess, ‘kay? Having repeatedly confirmed his manhood, the Tiny Titan decided it was about time to lead his army into Morlaidh. Deraegis had pretty well secured the joint his own self by defaming King Caellich, but now he would be tested on whether he could keep it…

Conceived by Gil Kane & Jan Strnad.
Posted by Diabolu Frank at 1:11 AM