Ryan Choi and Dr. Hyatt were falling through time, the former stripping off his suit and donning his Atom garb, the latter still half the man he used to be. Song lyrics referencing time filled the caption boxes surrounding the rainbow colored vortex of temporal “gravity” suck. Choi struggled to think linearly, and of Linear Men.

Choi had been threatened with having his family wiped from existence by Ryak should Ryan not call on him when the fugitive Hyatt showed his partial face and other remaining parts. Instead, Choi offered Hyatt a moist towelette. Hyatt explained that his father had been a confidant of the All New Atom’s predecessor, Ray Palmer. Years back, the original Professor Hyatt had discovered a “time portal, a singularity open to all chronological points at once. The only problem being the event was so microscopically small, only Ray Palmer could fit through it. They called it the Time Pool.” The junior Hyatt couldn’t figure out how the two men could keep themselves from being corrupted by the potential of such a discovery. Choi offered that men like Palmer and the senior Hyatt “weren’t tempted by things. All they cared about was knowledge.” Hyatt explained that after the disappearance of Palmer, his father fixated on the incredible responsibility of the Time Pool being left entirely in his hands. “I’d find him staring at it for hours on end, not eating, drinking nothing. I feared for his sanity.” One day, Hyatt the senior vanished, and Hyatt the junior went a bit mad with worry. Since he couldn’t enter the Time Pool, Hyatt “ate it. Swallowed the singularity whole.”

Ryak smashed through a classroom wall, sword drawn, asking if he hadn’t made it plain enough the consequences for Ryan not alerting him to Hyatt’s arrival. “It’s him… the Chronal Destroyer. He’s found us.” As Ryak chopped through a desk, Ryan shouted, “Respectfully, Doctor… MOVE YOUR BISECTED ASS!” Ryak the Rogue gave chase, until Hyatt drew Ryan into the singularity with him. The pair fell into a future where Ivy Town had become a hi-tech metropolis dedicated to the Atom. In town, Ryan spied a statue dedicated to a female Atom named “Jia Choi? How in the world?” Meanwhile, Hyatt explained that he knew his father must be in this time that the pair had both been drawn to, and where the other half of the junior Hyatt’s body resided. 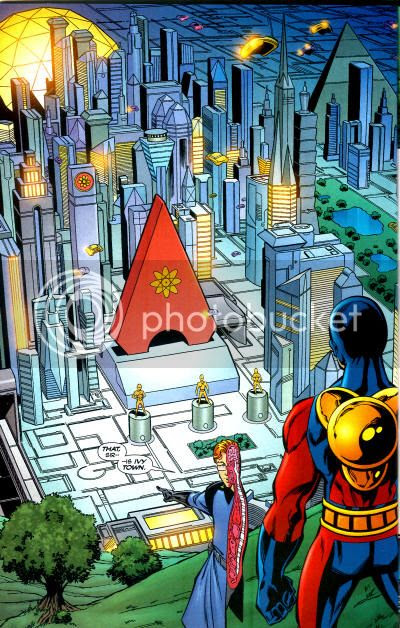 Ivy Town was a fascist state where signs warned “Little Brother is Watching You!” Choi and Hyatt were caught after curfew by a squad of Atom officers in a hover car. “Hol’ up, boy. You have the right to remain full-sized. You do not have the right to an attorney. Anything we make up can and will be used against you.” Choi was manhandled and clubbed with a golden baton/truncheon somewhat resembling his own, and it ticked him off. Sweeping the officer’s legs, Ryan had picked up a new futuristic cuss word. “Clak you, clakface.” The other cops initiated “random size combat mode,” growing and shrinking in turns against the Atom. Luckily for Ryan, the pigs weren’t used to anyone putting up a real fight, though Choi was concerned “Is this… this police state really going to be Ray’s legacy. Or, God help me, is this something else caused by the weird physics of the Bio-Belt? I can’t even think it… Could all this be my fault?” Given Ray’s conservative leanings, I’d place the money on him, if I bet on alternate futures (in a word: no.)

Turbojet Batwings and Supermobiles launched an air raid against Ivy Town, as news reported that negotiations with Themysciran diplomats had broken down, and “cityshrink” would begin in five cycles. Atom and Hyatt leapt into the cops' hover car, as the latter explained friendly rivalry between super-heroes had devolved into perpetual warfare over two hundred years, with Elongated City the first to be obliterated. Time was short and the stakes were high, so the Atom launched the hover car at the local gulag in a kamikaze dive bomb while he and Hyatt escaped through Ryan’s flying baton Bangstick. On the ground, they were greeted by Hyatt’s bound other half, and Ryak the Rogue pointing his laser pistol at them. “Is this what you’re looking for, oh fleeting mantle-holder? Here’s the reflection, boy. But you can’t have him, nossiree. He broke the rules and nearly turned the timepool into a typhoon."

The Atom tried to fight Ryak as a distraction for "Teddy" Hyatt, but the one half wouldn't leave without the other. Ryak traded a few blows, but managed to restrain Choi while shifting the group into a Time-Void, an infinite nothing of independent space-time. Atom swore he would fight on, but Ryak relented, recognizing Choi had deduced the truth of the situation. Ryan told "Teddy" that he had never come up in ten years worth of weekly letters traded with Ray Palmer, nor was he listed at Ivy University. Rather, "Teddy" had shown symptoms of senile dementia, indicating that he was in fact Professor Alpheus V. Hyatt himself. The seventy-eight year old had managed to use the Time Pool to regenerate his body, but not his ravaged mind. Ryak and Ryan came to an understanding, in which the Linear Man would set everything back as it was, but the twenty-four year old Atom was now solely responsible for both the re-aged Hyatt's welfare and the guardianship of the Time Pool. "Goodbye, Ryan. You reminded me about mercy. Unfortunately, my memory is really something hideously faulty.

As the Atom and Hyatt walked home, the Professor noted, "I remember you. You're my best friend Ray!" Choi kindly played along...

As with the first half, this story is so busy throwing random crap at you, it all become a dizzying and somewhat grating whirlwind of nonsense. Why cowboys? It gives the writer a chance to comment on the racist treatment of Asians in the Old West. Why was Hyatt bisected? Cool visual. What was with all that war of the super-hero houses stuff? Something to occupy space and offer up action without having to fill in any blanks. How about all the smash cut scene transitions? Nothing is given space to breathe, and all the Morrisonesque “mad ideas” feel more like undercooked distractions to bloat a less-that-poignant single issue story into a two-parter. Also, I disliked Ryak’s cutesy dialogue, which faked a new spin on a tired cliché genre character. At least Norton’s art was nice, recalling Byrne from the earlier issues.

“The Man Who Swallowed Eternity: Part Two—The Entropy of the Universe Tends to a Maximum” was by Gail Simone, Mike Norton and Andy Owens.

Posted by Diabolu Frank at 1:50 AM

"Why was Hyatt bisected?" I don't know, but it's making me nauseous.

"As with the first half, this story is so busy throwing random crap at you, it all become a dizzying and somewhat grating whirlwind of nonsense." All this craziness is partly what turned me against The All New Atom, and you were on the right track with the Morrison idea, because according to DC's Wikia, Grant Morrison came up with the outline for the series. Now it all makes sense to me.

I like Simone funny and on the right book I like her dark, but the crazy doesn't work for me.