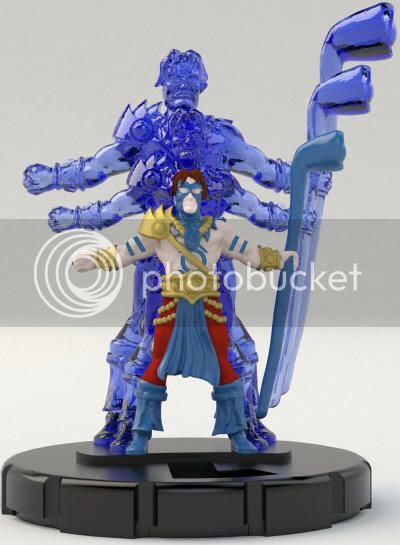 I don't play HeroClix, so this is all "teeny rubber figurines" and "gobbledygook" to me. I guess this calls for a block quote. You can grok the rest at Newsarama.

The War of the Light comes to HeroClix with the DC HeroClix Blackest Night Starter Game! As the Blackest Night encompasses the world, heroes and villains alike are deputized into the Lantern Corps to fight back against the legions of Black Lanterns. Choose a team of lanterns and take them into battle! This starter game includes everything a player needs to play HeroClix, including figures, map, rules and more. The DC HeroClix Blackest Night Starter Game will be in stores May 12, 2010. For more information please visit www.HeroClix.com.

Nok klok klek. The smallest member of the Deputy Lanterns carries what may be the largest emotional power, Compassion's indigo light. Ray Palmer, The Atom is now a member of the corps that channels the energy of every other corps, and has, according to their leader, the hardest emotion and energy of its' own to harness. Indigo Tribe Atom's official WizKids description follows:

A stalwart member of the Justice League, Ray Palmer’s life was torn apart when he discovered that his love Jean Loring was a murderer. Even after taking a pilgrimage into the multiverse in search of a new purpose, the Atom found he still felt empathy for Loring and all those who had brought evil upon the innocent. In the rise of the Blackest Night, the Atom’s rare compassion allowed him to join the Indigo Tribe and wield the power of their light.