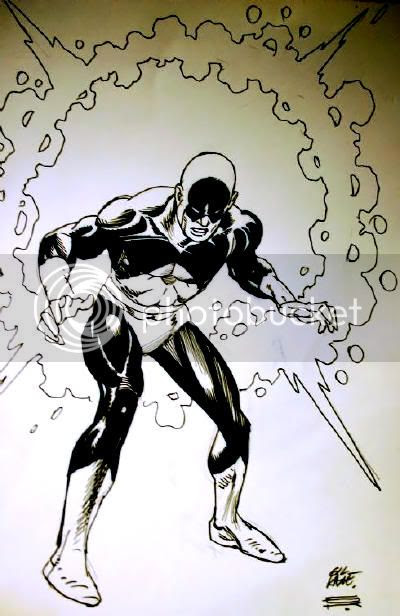 I've been doing a ton of work on this blog or that blog or the other one, but I wasn't worried about the Atom. See, I just did his origin story, and almost immediately after turned around with that Heroclix post. Hey I'm golden! That should be good until... wait, that was LAST Tuesday? And the only other thing I posted was that Peanuts image I recycled & "simulcast" over three blogs? Way to suck, Frank!

As much as I'd like to post the second story synopsis from Ray Palmer's debut comic, I haven't written it yet, and I've gotta study tonight (not to mention tend to my soon-to-arrive ailing girlfriend.) Ah, good thing random pieces of art make such awesome filler posts! A little editing-- resizing, contrast adjust, some links-- and I'm back to golden! Okay, bronze? Brass? Copper?

So, who better to re-commission art blogging for the Tiny Titan than his co-creator and all around comic book legend Gil Kane? Michelangelo? Di Vinci? Ah, don't be pedantic! Besides, he draws hands way better than Picasso, but not to hear him tell it! Here's what this piece's owner had to say...


There is a long story behind this one. First, it only took hours of cajoling to get Gil to even agree to do a sketch. Second, he worked on it for about an hour struggling to get the Atom's right hand exactly the way he wanted it. After about 20 minutes of drawing, erasing and redrawing, he scrapped the entire sketch (Which was gorgeous). He then started all over again and I ended up with the version you see here. Someone asked Gil if they could purchase (or have) the other sketch, and he was so unhappy with it, he just wadded it up and threw it away. Trust me it was beautiful and, I think, even nicer than the one I ended up with, but it was his perogative as the artist not to be happy with it.

I think it's fantastic, even as it illustrates what happens when a six inch man eats a full sized bean.
Posted by Diabolu Frank at 5:06 PM