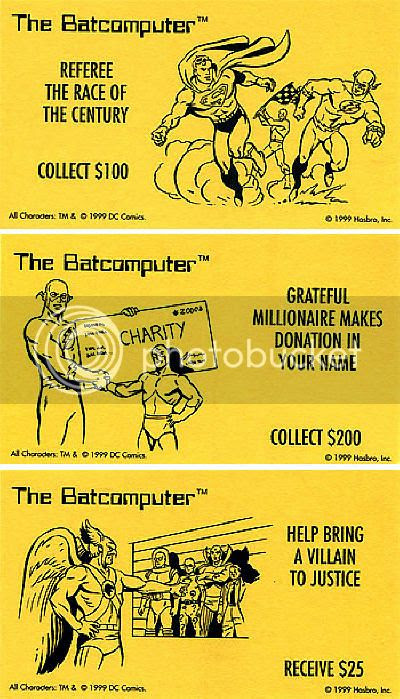 It's been a lot of years since I missed my opportunity to buy the swell JLA-themed Monopoly game at a reasonable price, and it's even been over three years since The Irredeemable Shag did a spotlight article on his copy. The Atom didn't have a major role in the game, which stopped at the inclusion of the first expansion member Green Arrow, but I figure it's about time to do a post on his appearances on its “The Batcomputer” cards. The Super Friends equivalent to “Community Chest” cards offer the Tiny Titan to "Referee the Race of the Century," and enjoy when a "Grateful Millionaire Makes Donation in Your Name," plus Hawkman and Chronos are worked in on "Help Bring a Villain to Justice." They're pretty boss, and hey, if you really want to play the game as the Mighty Mite, you can always throw this guy on the board. Speaking of which, you can see all of Shag's tubular scans here!
Posted by Diabolu Frank at 12:00 AM