Green Arrow and Green Lantern Hal Jordon were discussing the latter’s three way with Huntress and Lady Blackhawk while moving their proactive crusade against crime to Gotham City. Hal also confessed to never liking Batman, as if anyone does. A private investigator once employed by the Dark Knight named Jason Bard pointed them in the direction of a hideout to raid.

Meanwhile, Starman and Congorilla had separately made their way to a Blackhawk Island, which villains had taken as their own. The heroes mistook one another for bad guys, but in the mighty Marvel tradition, worked their way toward camaraderie through blood sport. Realizing that they were both crying… for… JUSTICE, they climbed into an old airplane and continued pursuing it together.

Crooks had trashed the Flash museum while stealing the Cosmic Treadmill, so the Golden Age model speedstar found himself greeting the Atom. Jay asked Ray to please not refer to him as “Mr. Garrick,” and Palmer was feeling the years his own self. “I see it every time I look in the mirror. The last couple of years have hit me hard… Hey, I’m alive. Makes me luckier than Ralph and Sue.” Jay’s child helpers had grown up to guard the museum, and were murdered because of it. The Tiny Titan had three more reasons to track down Prometheus, then. 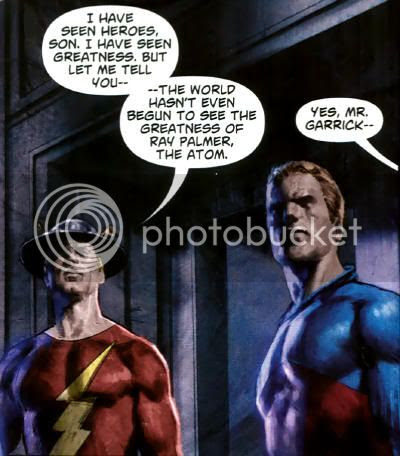 Jay worried that with Ray’s wife turning murderess and the Princess that perished in the Amazon, Palmer had seen enough troubles. The Mighty Mite agreed, explaining that he tried to stop blaming himself and live a new life on another world. “I even found another Jean Loring,” but “Fate reminded me that I’m Ray Palmer,” and it all ended in tragedy. The Flash offered Ray a bone. “Listen… Al Pratt and you were never close like me and Barry and Wally or Alan and Hal, but… Al told me more than once-- how proud he was of you for taking on the mantle of the Atom.” Ray had thought their distance had to do with their differences in powers or something, and had no idea how Pratt felt. “Al was an odd one, private. Maybe his size-- he was wary-- I don’t know.” Knowing Al’s feelings now, Ray promised “I’ll make him proud.”

The Freddy Freeman incarnation of Captain Marvel showed up, a friend to the Atom dating back to when Ray was de-aged and led the Teen Titans. Even with all the madness Ray had lived through, that period was the most dreamlike to Palmer. Freddy explained that he was on the trail of Zeta Beam technology stolen from S.T.A.R. Labs in Fawcett City. Captain Marvel and the Atom decided to pair up to continue the investigation following Palmer’s lead in Gotham City, while the Flash intended to keep in touch as the situation developed. Following Green Lantern and Green Arrow’s successful raid, Captain Marvel and the Atom joined the pair… for justice! Hal was supposedly almost killed by Javelin, but Supergirl turned up to save the day.

The second chapter of Cry For Justice, “The Gathering” was by James Robinson and Mauro Cascioli. Still a good looking book and still a bit plodding, but reads well when taken as a chapter in trade paperback. I recognize exception was taken at the more prurient aspects, but I could actually see Helena and Zinda of all heroines taking a swing down the Hal pole. I don’t think it reflects especially badly on anyone, and the comments were just vague enough to retain the option of personal interpretation. I also appreciate Robinson remembering little bits of continuity, especially when it comes to characters as oft-neglected as the Atom.

Didn't Gail Simone or whoever wrote Birds of Prey #7 come back at the three-way comment by saying Hal was passed out?

I wasn't aware of the rebuttal. Both sets of lines are open to interpretation in the "did they or didn't they" area, and I'm okay with it either way. I'd hope Helena had better taste than Hal, but she's had her share of embarrassing slips. Now that Huntress is back to being a Wayne, that one night with "Uncle" Dick is extra squicky.